Six years ago, Bryan Sheffield had no energy industry experience. Today, he's on track to become a billionaire before his 40th birthday. How it happened is one of the greatest Texas oil stories of all time 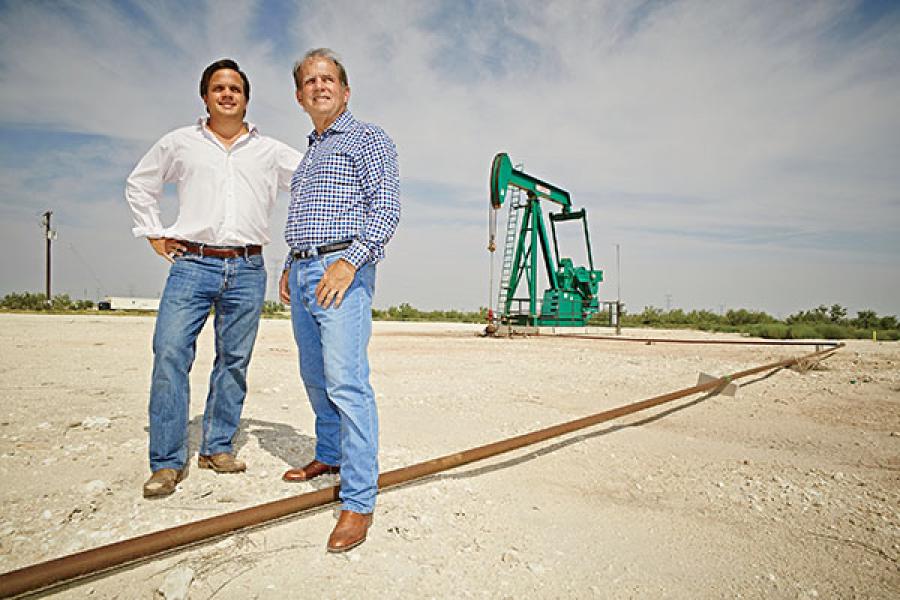 Image: Scogin Mayo for Forbes
Like father: Bryan and Scott Sheffield are the closest thing oil-obsessed Midland, Texas, has to royalty

The Great American Energy Boom is responsible for some of the most incredible roughneck-to-riches stories in business history. Aubrey McClendon built Chesapeake Energy into a land-grabbing juggernaut, lost his shirt (and his spot on The Forbes 400) from too much borrowing and is now clawing his way back. Harold Hamm envisioned using horizontal drilling and hydraulic fracturing technology to bring up oil from under North Dakota and amassed a $19 billion fortune at Continental Resources. Trevor Rees-Jones has built a $5.4 billion fortune to explore shale gas under Texas and Pennsylvania.

But when it comes to pure wealth whiplash, it’s tough to top the tale of 36-year-old Bryan Sheffield, who in just six years has parlayed family connections and a trader’s taste for risk into 120,000 acres of Texas’s oil-rich Permian Basin and a personal fortune that could soon top $1 billion. “What Bryan has accomplished in such a short time is incredible, and it just highlights the amazing wealth creation occurring in Texas right now,” says Cameron Horwitz, managing director at US Capital Advisors in Houston.

Haven’t heard of him? If you’re not from Midland, the dusty heart of the boom-and-bust West Texas oil patch, that’s not surprising. But here, amid the thousands of bobbing pump jacks and endless dirt access roads that service them, he’s royalty, the son of Scott Sheffield, CEO of Pioneer Natural Resources (the largest operator in the region), and grandson of Joe Parsley, a West Texas oil legend. Despite being born into the industry, Bryan Sheffield kept his distance—at first. “I was searching for my destiny in the Chicago commodities pits,” he says. Then he moved to Europe to trade interest rates. “But I was a break-even trader, barely getting by.”

At 29, with a new wife, he came home to give the family business a whirl. At his grandfather’s suggestion, Sheffield agreed to take over operatorship of the 109 original wells grandpa Parsley and partner Howard Parker had drilled near Midland back in the 1960s and 1970s. They had long since sold off most of their assets in the region, but held on to these wells and could choose who managed them.

“I didn’t even know what that meant,” says Sheffield, who quickly learnt that this silver spoon had a fair amount of grit in it. The operation requires driving hundreds of miles of back roads a month, checking gauges and valves, making sure pumps are working and nothing is leaking. The job paid about $500 per well per month, or some $600,000 a year. Sheffield could hire people to do the work (“I’m a finance guy. If I tried turning a wrench, a pressure valve would go out and kill someone”) and have cash left over to build something bigger. “Do what you want,” said his grandpa. “Just take care of the properties.”

Hoping to learn something about the business before taking it over, Sheffield asked his dad to let him take a six-month crash course at Pioneer, which owns some 7,000 wells spread over 900,000 acres in the region. His most important tutor was Paul Treadwell, an operations foreman who had been with the company since 1992. They spent days driving the fields. Bryan was green, but he knew what questions to ask. And Treadwell, 11 years older  than him and the father of three teenagers, was a patient teacher. “I love to teach people. And he’s got a great memory,” says Treadwell.

It didn’t take long for Sheffield to catch oil fever. Prices were surging, hitting a record high of $147 per barrel in mid-2008. Armed with new knowledge and a new partner (Treadwell left Pioneer to join him), he decided to do some drilling of his own. He named his new company Parsley Energy, in honour of his grandpa. The only problem: Oil leases were so expensive that he couldn’t afford to start drilling.

But, as anyone in boom-to-bust Midland can tell you, good times don’t last. In early 2009, oil prices fell to $35 per barrel as the Great Recession sank the global economy. Rather than pour precious capital into what would be uneconomic wells, many Permian operators just let leases expire.

Sheffield’s trading instincts kicked in. He started buying up drilling rights—worth a couple thousand per acre before the crash—for as little as $500 each. “I got lucky,” says Sheffield. “The best time to lease is when others are letting leases go.” 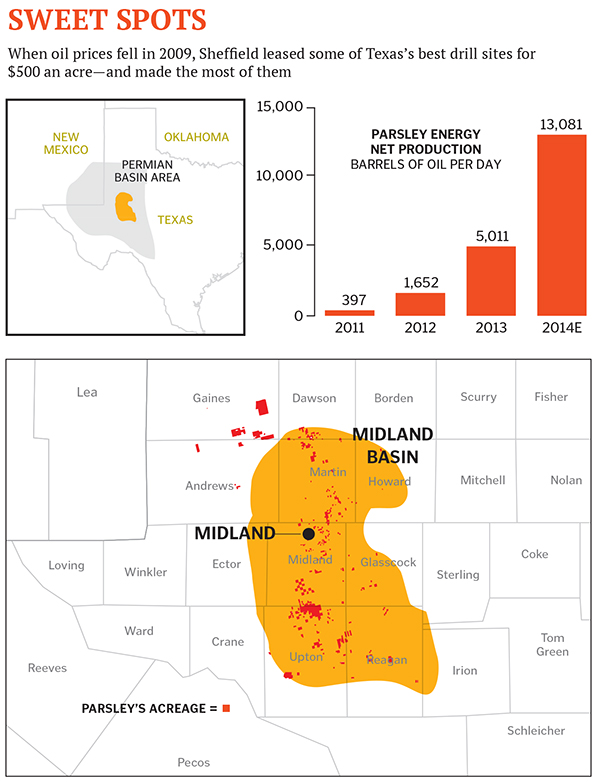 Land wasn’t the only thing bottoming out. The cost to drill and frack a vertical well fell by nearly half, to $1.3 million. Like his grandfather, Sheffield raised cash from friends and family to attack the opportunity. “Anything Sheffield was going to do, we wanted to be involved with,” says Chris Kayem, whose family owns the Tex-Isle pipe company and has done business with Joe Parsley and Scott Sheffield since the 1970s. The Kayems put up $500,000 for 10 percent of Parsley Energy and millions more to fund early drilling efforts.

Financing in place, Sheffield set to work. Permian drillers historically tended to drill vertical wells through layers of oil-bearing rock known as the Sprayberry and the Wolfcamp. They’d perforate the pipe in both sections to draw oil up, mixing the two meagre flows together to make a single good “Wolfberry” well. In some spots, though, the Sprayberry was so thick that they didn’t even bother with the deeper Wolfcamp.

Sheffield was no geologist, but in the well-mapped Permian Basin, he didn’t have to be. By studying all the wells near grandpa’s first 109, he noticed vast tracts of land drilled for decades by the likes of Chevron and Merit Energy, with wells that tapped only the Sprayberry. But the Wolfcamp, he learnt, was thick there, too. He quietly leased up the mineral rights under those operators, then partnered with Merit to start drilling them.

These thousands of acres in the heart of the Wolfcamp, acquired for a song, now provide Parsley with more than 20 years’ worth of drilling spots into what has come to be understood as a layer cake of separate oil-bearing rock formations.

As the economy recovered, so did oil prices. In 2011, Sheffield went to see Phil Z Pace at Chambers Energy Partners. Pace, the former head of oil research at Lehman Bros, has known Scott Sheffield for 25 years and was impressed with Bryan. Chambers loaned Parsley $200 million to ramp up drilling. “There are lots of engineers and geologists better trained than Sheffield,” says Pace. “But he got the right acres and drilled good wells. At the right time.” Soon Parsley was in a position to pay off Chambers’ loans.

The new Permian boom really took hold in 2012, when geoscientists, including those at Scott Sheffield’s Pioneer Energy, fully evaluated how much oil could be recovered in the region. The layers extend from 8,500 feet deep down to about 13,000 feet. “I see the field now becoming the largest in North America and one of the largest in the world,” says Scott Sheffield, with the potential, he says, to produce 100 billion barrels.

The gold rush has been stunning. In September, Encana Corp agreed to acquire another Permian upstart, Athlon Energy, for $6 billion, or about $37,000 an acre. In May 2014, Sheffield listed Parsley Energy on the New York Stock Exchange, raising $1 billion. In June, shares popped enough to make his 34 percent equity stake worth $1 billion. Since then, the recent slide in oil prices has pushed that down to $750 million.

This past summer, Parsley moved its headquarters from Midland to Austin to attract young talent without running the risk of stealing people from dad’s Pioneer, the biggest employer in Midland. He’s already started to shift from drilling mostly $2 million vertical wells to the more densely packed and higher-producing $8 million horizontal wells that Pioneer has been perfecting. “We’re not big enough to do trial and error,” says Treadwell. “We’ll watch the other guys.”

As for Scott Sheffield, he plans to retire from Pioneer in a couple of years. In five years, he’s led Pioneer shares up 450 percent, among the top performers in the oil business; his shares are worth $120 million. It’s been a great run, but given what his son is up to, it makes you wonder: Would he ever work for Bryan? “No,” he says. “I will continue to give him free advice.”

Tweets by @forbesindia
India Ready for a Giant Leap...
The Jaguar F-Type R Coupe is wonderful, but lacks finesse