Buy now, pay later: Klarna promises to be an alternative to your credit card

After flat-packed furniture and streamed music, Sweden's latest big export could be an alternative to your credit card 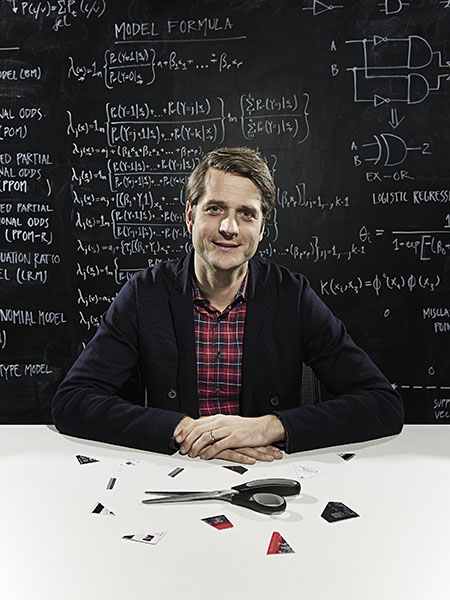 After conquering northern Europe, Klarna CEO Sebastian Siemiatkowski wants to disrupt online credit and payments in the US
Image: Levon Biss for Forbes

A faint smile lights up Sebastian Siemiatkowski’s face as he recounts how his humble online-payments startup bagged the Warren Buffett of venture capitalists (VCs) as a board member. It was 2009, and his company, Stockholm-based Klarna, was flying under the radar in an industry dominated by PayPal and credit card giants. But Klarna had been profitable from early on, and VCs like the venerated Silicon Valley firm Sequoia Capital were starting to take note of its increasing domination of digital payments in Scandinavia. Sequoia sent a young partner, Chris Olsen, to Sweden to court Siemiatkowski and his two co-founders with an investment pitch and a bit of flattery, going so far as comparing the trio to the founders of Google and Apple.

“We were smiling like, ‘Oh, that’s nice’,” Siemiatkowski says. But as Olsen, his job done, was getting ready to leave, Siemiatkowski piped up with a high-stakes gambit. “Just tell me one more thing,” he remembers saying. “If we’re going to be the Google of banks, would you really just send you? Wouldn’t the whole of Sequoia come here?” Siemiatkowski’s colleagues looked at him aghast, but a chastised Olsen walked out of the room and immediately got on the phone with Mike Moritz, the legendary Sequoia partner whose bets on companies like Google, LinkedIn, Yahoo and Zappos earned him a spot in the top echelon of the VC world. When Moritz called back, he proceeded to apologise for not coming to Stockholm. Perhaps to make up for the slight, he agreed then and there to join the startup’s board. (Moritz remains on the board and flies to Sweden frequently for meetings.) “Sometimes it’s good to be a little cocky,” Siemiatkowski says.

Today Klarna’s ambitions go beyond cocky. It’s gunning for the $93 billion US market for credit card issuing, an industry that’s dominated by giants such as American Express and Capital One, with PayPal and ambitious startups in close pursuit. Like PayPal, Klarna is an online-payments platform with an emphasis on “buy-now-pay-later” financing. “We’re a bank,” Siemiatkowski says from a stark conference room in Klarna’s head office. Klarna lent millions of dollars to its customers last year and has about $1 billion on its balance sheet. His dream is that enough merchants embrace Klarna as a free-floating credit issuer so that millions of shoppers will no longer see credit cards as a first choice for financed payments.

Klarna’s main competition: PayPal, whose financing business, PayPal Credit, formerly known as Bill Me Later, has been steadily growing since 2008, albeit with an embarrassing blip. Last year, the Consumer Finance Protection Bureau forced PayPal to pay a $25 million fine for sneakily signing people up for credit. Yet today “it’s one of our fastest-growing businesses,” PayPal spokesman Josh Criscoe says, increasing at a 27 percent annual clip. PayPal Credit has $4.5 billion out in loans to customers around the world and, in September, its subsidiary Braintree made financing available to merchants like Airbnb and HotelTonight.

Even more similar to Klarna is Affirm, a San Francisco startup launched by Max Levchin, a PayPal co-founder. Affirm is also racing to partner with merchants (it has 800 so far) to offer payment options, including financing, as an alternative to credit cards. The company has raised $425 million from a passel of Silicon Valley VC giants and counts Expedia and Shopify among its merchant partners.

Siemiatkowski, who is 35 and wears the hipster’s livery of red plaid shirt and youthful, side-swept hair, is sanguine about these competitive threats. While Affirm came on the scene only in 2013, Siemiatkowski has spent the past 11 years quietly turning Klarna into his home country’s biggest digital-payments platform. Klarna processes 40 percent of all Swedish online payments. Klarna’s big selling point is ease and simplicity. It lets you skip paying for an item upfront—no more squinting at a credit card, typing in numbers and remembering a password. You simply enter your email and delivery addresses. That information, plus  your activity on an ecommerce site—time of day, the product you’re buying and any web cookies that can be picked up from your visit—is enough for Klarna to decide whether you’re a creditworthy human. Siemiatkowski calls this a “one click” experience. Sounds familiar? Amazon has a US patent on “one click” shopping, which has contributed to its enormous growth and kept rivals from designing similar systems. Siemiatkowski says Klarna got around Amazon’s patent by designing its own system. “A lot of merchants get so nervous about this patent infringement that they didn’t build one-click,” he says.

Once you check out, Klarna pays your bill and emails you an invoice. The startup’s foray into financing—and beyond plain-vanilla payments processing—is what got investors like Sequoia so excited. Its latest investment round, in December 2015, brought its valuation to $2.3 billion. The company said it earned $20 million on sales of $325 million in fiscal 2015. Revenue is expected to rise by 42 percent to $463 million in fiscal 2016, according to PitchBook. In Sweden about 10 percent of Klarna’s transactions use financing, typically for products that cost $400 or more. For the remaining 90 percent, users either opt for the 30-day grace period, pay after delivery or use a separate feature called Klarna Direkt to pay immediately. (Siemiatkowski won’t reveal how Americans use Klarna’s financing feature.)

Perhaps Klarna’s boldest innovation is its email-and-address method of establishing the creditworthiness of its customers. No other online-payments company takes such risk on both the consumer and the merchant, the company claims. Siemiatkowski is blithe about fraud and risk, calling it a “dynamic problem”. Static solutions like passwords fail because they assume the same level of risk for everyone. “But 99 percent of customers aren’t fraudulent,” Siemiatkowski says.

Remarkably, Klarna’s bold bet on people’s honesty and solvency has worked. Its default rates are under 1 percent. Credit card default rates in the US have averaged 2.2 percent for 2016. “We have among the lowest industry default rates in all the countries that we work with,” Siemiatkowski says. It has 45 million users, mostly in Scandinavia, with 2 million in the US and 1.5 million in the UK. In August 2016, Topshop, the trendy British clothing chain, began advertising Klarna on all its product pages and adding a Klarna financing button to all shopping carts that total £40 or more. Wish, a hugely popular ecommerce site that lets you buy cheap products direct from China, also has a “pay after delivery button” from Klarna, which has boosted the site’s sales. “Taking the increased conversion and higher order value into consideration, Klarna’s checkout increased our sales by 40 percent,” Wish co-founder Danny Zhang is quoted as saying on Klarna’s website.

Siemiatkowski, along with co-founders Niklas Adalberth and Victor Jacobsson, started Klarna in 2005 during his third year of a four-year master’s programme at the Stockholm School of Economics. When they entered Klarna into the college’s 2005 entrepreneurship contest, a prominent board of businesspeople shot it down. Sending invoices over the internet was a terrible idea, they said. “That made them want to do it, to prove them wrong,” says Erik Törnberg, who led Investment AB Öresund’s first investment in the firm, a 26 percent stake for around $4.6 million. (Törnberg exited in 2013 for a return of $144 million.) Klarna started signing up merchants such as WebHallen and Siba, Swedish retailers that sell consumer electronics like digital cameras and headphones. Suddenly invoicing for online payments made sense. “People were afraid to hand out their credit details on the internet,” Törnberg remembers.

Sweden has some of the world’s highest levels of social trust, according to a 2008 global survey by Pew. Siemiatkowski would rather trust his customers than see them walk away at a checkout: 69 percent of online shoppers in the US abandon their shopping carts, often because they’re asked to create an account or the process takes too long. That’s around $260 billion in lost orders.

Klarna’s geography is relevant for another reason: Scandinavians are bored of cash, and Sweden is on track to become one of the first countries that is truly cashless. Homeless magazine peddlers carry card readers, and churches take their tithes through SMS. Half the branches of Sweden’s biggest banks don’t even have cash on hand or take cash deposits. Americans aren’t ditching cash as quickly, but to Klarna’s benefit right now, they’re bigger on digital payments. The US ranked third in Citigroup’s Digital Money index, which assesses 90 countries in their progress in adopting digital payments. Sweden fell three places in the last year to No 7.

Klarna has plenty of competition in PayPal and Affirm, not to mention Apple and Google, which are expanding their own payment platforms. But investor Hans Otterling of Northzone says Klarna’s obsessive focus on consumers should help it to hold its own against deeper-pocketed rivals. “It’s also a huge market, and there won’t be one winner-takes-all,” he says. “There will be multiple players, and Klarna will be one of them.” With prospects like these, Siemiatkowski’s cockiness can easily be excused.

Tweets by @forbesindia
Total recall: R Balki reminisces about his three glorious decades in advertising
The ambition and triumphs of Naina Lal Kidwai