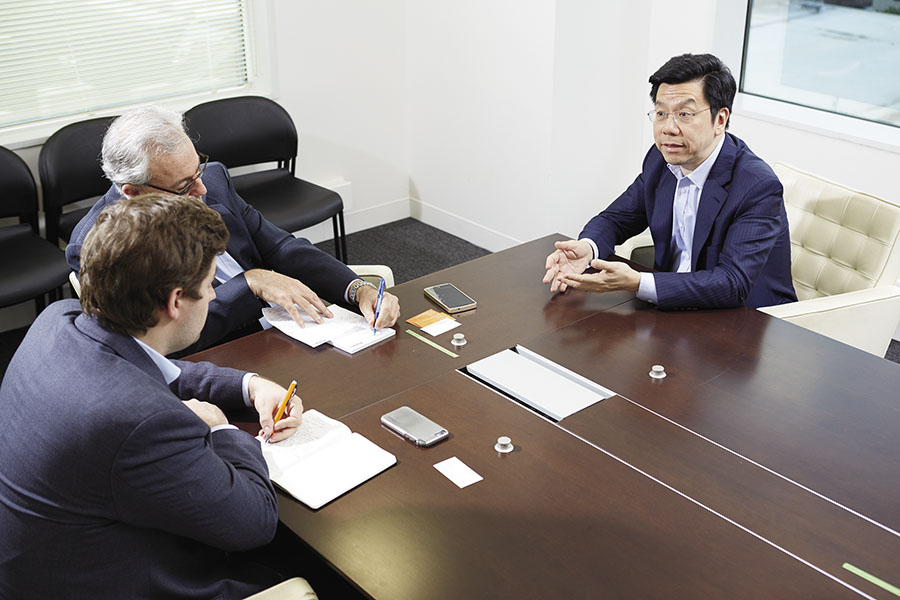 “Whoever has the most data wins”: Kai-Fu Lee sharing intelligence in mid-May with Forbes Asia editorial staff
Image: David Yellen for Forbes

Kai-Fu Lee watched the US beat China to global internet leadership during the dotcom bubble from the inside. Now with what he sees as an even greater technological revolution taking place in Artificial Intelligence (AI), Lee doesn’t expect China to take a backseat a second time. “China started slow, and American companies went international,” Lee says during a May visit to Forbes Media’s headquarters. “But simple math says China has a larger GDP. The market will be bigger.”

When Lee talks about AI, he speaks from first-hand experience. The Taiwan native developed the first speaker-independent phone recognition programme as a PhD student at Carnegie Mellon in the late 1980s, before stints at Apple and as an executive at Microsoft and Google in China—in fact, he was founding president of Google China.

Google and its peers were ultimately thwarted in their ambitions to carve out leadership stakes in the Chinese market, in part due to cultural differences among consumers as well as privacy clashes with the Chinese government. When Lee returned from working at Google’s Mountain View, California, headquarters to launch his own VC fund, Sinovation Ventures, he came back to a China firmly entrenched in what he now describes as a duopolistic global tech economy. US internet software continued to lead the English-speaking world, while a group of ­Chinese companies, famously led by Baidu, Alibaba and Tencent (B-A-T), controlled their domestic market and exerted increasing influence in Southeast Asia and developing markets.

With companies on both sides of the Pacific racing to develop applications of AI, China’s scale can prove a decisive advantage, Lee believes. The country boasts perhaps 43 percent of the world’s trained AI scientists, Lee says, with Microsoft alone training about 50,000 Chinese scientists in processes critical to the field starting in 1998. Overall, this doesn’t represent the cream of talent in the field—that is still found in the US, Canada and Britain, he says—but China’s legions are good.

China’s political leadership continues to invest heavily in research and technology. And developers may not face the same regulation when it comes to pushing real-world trials, such as with autonomous vehicles, or in mass data collection that would be viewed as intrusive or a privacy violation in the West. 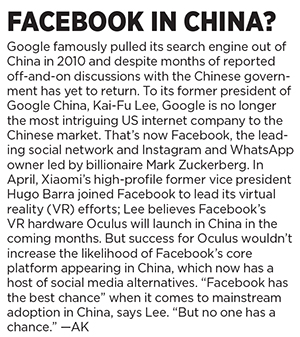 In driverless cars, the US. has about a two-year head start, according to Lee. But each minute American tech companies find themselves mired in a regulatory battle or hobbled by objections from transportation incumbents, the Chinese can close that gap.

What’s more, he says, top-down rule in China will countenance a long stretch of data-gathering experience in which the casualty rates from autonomous-vehicle use steadily drop—by orders of magnitude, Lee hypothesizes. Even relatively safe records may not pass muster in democracies.

Not only do Chinese companies have the advantage of a hyper-competitive market in which the leading players typically compete across a range of applications and use cases (compared with more specialised leaders in the US), the Chinese government continues to invest in R&D while unstable visa policies could encourage more academics to return to China after attending universities in the US. Even a language barrier can work in China’s favour.

Lee’s odds on China are contested by at least one top American voice in the field. “The leading AI researchers, university departments and research labs are still in the US,” says Oren Etzioni, CEO of Seattle’s Allen Institute for Artificial Intelligence. “However, China is moving fast. As long as we continue to have an open society and strong immigration, we will remain ahead.”

The race to AI leadership is crucial because what we know as AI will greatly exceed direct technological applications, Lee argues. Industries ranging from banking to insurance, health care and media will all face massive transformations. Lee is fond of telling the story of how he pitted his personal banker against computer-run trading algorithms. The machines produced a return that was eight times better. “Anything with a feedback loop will give way to AI,” Lee says. That could include scanning hundreds of insurance claims or mortgage applications, shipping orders and even evaluating patient X-rays.

The small comfort for logistics managers, doctors and mortgage officers: A tiny percentage—Lee guesses about 10 percent—of decisions will remain so mission-critical or life-and-death that a company can’t take the chance the machine is wrong or its communications are off. “Robotics can fake some empathy, but compassion isn’t there,” Lee says. “With 10 percent wrong, you can still lose all trust.”

Even near accuracy would still mean a massive displacement of workers, pushing the jobs to managerial or quality-control roles or putting a “last mile” human face on interactions. Lee and his team frequently invoke a 2013 Oxford research paper by Carl Benedikt Frey and Michael A Osborne that predicted that 47 percent of jobs in the US economy would be threatened by automation. Lee is not impressed by recent developments such as Facebook’s announcement that it would hire 3,000 moderators to help its systems flag and take down inappropriate videos. “That’s a tiny number,” he says. “Look at what percent of global internet users Facebook is reaching” relative to the number of people who will be paid to monitor them, he says. “It’s noise.”

The rising AI economy, meanwhile, won’t look like the B-A-T companies or the de facto American hegemony of Apple, Facebook, Microsoft and Google. Lee believes the AI economy will be spread out across practices within tech companies and large corporations as well as sold as a contract service by specialists. Through his $1.2 billion fund—building to $2 billion—Lee is investing in applications that can benefit from AI, including, in America, SuperFlex, a company building exosuits for disabled and elderly people, and Wonder Workshop, which makes robots to teach children computer science. (He’s sceptical about humanistic service robots like Softbank’s Pepper, however.)

Lee says he’s investing about 95 percent in China and only 5 percent in the US. No research hub has more users at its fingertips than China. Says Lee: “Whoever has the most data wins.”