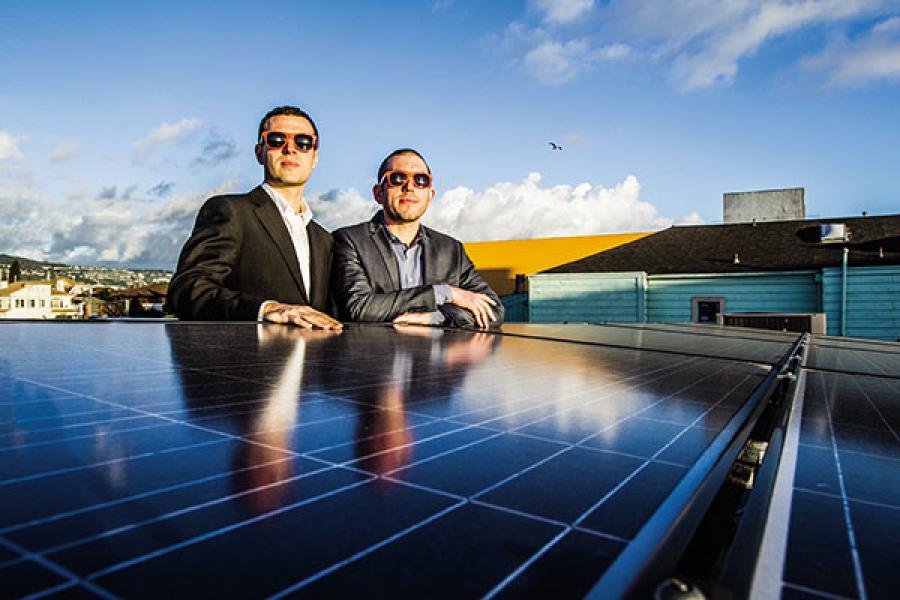 Image: Eric Millette for Forbes
Mosiac co-founders Billy Parish and Daniel Rosen are offering better-than-CD rates if you want to wager on solar

Don’t hold your breath, but the US Securities & Exchange Commission could ﬁnalise regulations this year to implement the JOBS [Jumpstart Our Business Startups] Act, the 2012 law that lets startups raise funds directly from mom-and-pop investors. Mosaic isn’t waiting. The two-year-old Oakland, California, ﬁrm already won approval in California and New York to allow individuals to invest directly via its website. The twist is that the investments are loans, not equity, and the money goes (for now) only to new solar power developments. In the past, ordinary investors have been shut out of the solar boom, as most projects obtain equity or debt ﬁnancing from banks and corporations, which lately are not so eager to lend for solar projects. “Anything that introduces new sources of cost-effective capital is valuable,” says Reyad Fezzani, a former British Petroleum executive who is now chairman and managing partner of Energy Finance Company in Manhattan Beach, California. In late December, he raised $350,000 from accredited investors through Mosaic’s website for a 470-kilowatt photovoltaic array that his company installed on a New Jersey convention centre. He says he’s saving 200 to 300 basis points over banks with Mosaic.

Even not particularly green-minded investors might be tempted by Mosaic’s returns of 4.5 percent to 6.5 percent, well above CD [Certificates of Deposit] rates. Residential solar projects tend to have default rates as low as 0.2 percent. “One of the fastest ways to build the clean energy economy is to allow more people to beneﬁt from it,” says Billy Parish, Mosaic’s 31-year-old co-founder and president.

Mosaic puts the burden on investors to assess the risks in project prospectuses. If they like a deal, they can get in for as little as $25. No money is transferred if a deal isn’t fully ﬁnanced. The developer pays back the loan with interest from income generated by the sale of electricity to its customers. Mosaic takes 100 basis points of the interest rate (along with an origination fee and annual platform fees) and passes the rest to investors.

Within the ﬁrst 24 hours of going live in January, Mosaic’s new website raised more than $300,000, including $227,875 for three loans for solar arrays on three affordable-housing complexes that offered returns of 4.5 percent. Mosaic has now raised a total of $1.1 million for all projects. Parish says proﬁtability is “within sight”.

Anthony Kim, a solar analyst with research ﬁrm Bloomberg New Energy Finance, questions whether Mosaic can attract a big enough pipeline of investors to fund large solar projects. “For now, I think it’s a relatively niche product,” he says. Mosaic hopes to build on its current 7,000 potential investors via social media referrals and by targeting foundations, ﬁnancial advisors and corporations. Mosaic board member Marco Krapels, a renewable energy ﬁnancier with the Dutch bank Rabobank, has his eye on the $17 trillion that sits in US retirement accounts. “If you could put a Mosaic note in an IRA [Individual Retirement Account], I think the opportunity is just massive,” he says. Fezzani says he’s investing his own money in Mosaic’s offerings. “I know many people who say they want to invest in solar, but there’s just been no option before.”