As rivals are firebombing it and its $10 billion valuation seems overly rich, behind the scenes co-founder Arash Ferdowsi works to keep the file-synching upstart humming 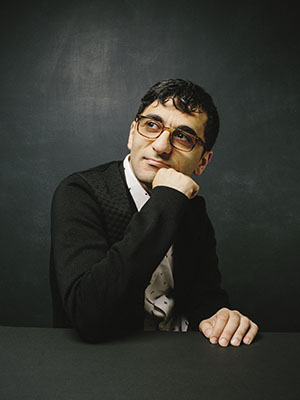 Image: Timothy Archibald for Forbes
Ferdowsi at Dropbox HQ in San Francisco: “There is a massive, massive opportunity.”

Arash Ferdowsi is fiddling absent-mindedly with the Lego bricks that cover the table in a conference room at Dropbox headquarters. His attention is focussed on a whiteboard on which a trio of engineers and product managers are presenting early mockups of Notes, an unreleased app that would allow people to collaborate more easily on files. Ferdowsi, 29, is the introverted, press-shy co-founder and chief technology officer of Dropbox, and his product review takes the form of a gentle grilling. As his colleagues deliver details of the new product, Ferdowsi interjects frequently with a gentle “Yep, yep” or “Yep, yep, yep” delivered in staccato bursts that always signal he knows what they’re going to say before they finish their sentences. After peppering the trio with questions, he wraps up by issuing a set of instructions, leaving a small mark on yet another piece of a company whose products and culture he has done more to shape than anyone. “No one touches more of Dropbox than Arash does,” says Ramsey Homsany, the company’s general counsel. Ferdowsi’s far-better-known co-founder, CEO Drew Houston, puts it more succinctly: “Don’t start a company without him.”

These days Dropbox may need to lean on Ferdowsi’s talents and insights more than ever. The company, started eight years ago after Houston had just graduated from MIT and Ferdowsi was still a student there, has grown at a dizzying pace. With $1.1 billion in venture financing, it has racked up more than 400 million users and become synonymous with file storage and synchronisation. But Dropbox has recently faced a barrage of questions from reporters and analysts who wonder whether its successful run can continue—and whether it can ever grow into the $10 billion valuation that investors gave it in its last round of financing more than a year ago. It’s not hard to see why. No startup faces a more formidable group of competitors, which include Apple, Google and Microsoft. For them Dropbox’s core capabilities are a feature they often view as a loss leader. Google recently offered free unlimited storage to users of its Photos app. Another competitor, Box, while smaller, is growing faster, according to IDC, and yet it, too, has faced investor scepticism as its shares have fallen almost 30 percent since the first day of trading. None of this is lost on Dropbox. “We compete with every major company in the world, and they’re all firebombing us,” says Houston.

These very real challenges don’t appear to have slowed Dropbox much. The company continues to rack up consumers for its free service, with a small minority of those opting for the $10-a-month ‘Pro’ account with additional storage. To compete more effectively for business customers, it developed an enterprise version of Dropbox and gradually beefed up its capabilities. Launched in April 2013, Dropbox for Business signed up some 100,000 customers through the end of 2014. The number of customers grew by another 30 percent in the first half of this year. While the bulk of them are small and mid-size businesses, the number of large customers is growing rapidly, even though the company is only now building the sales force it needs to compete in the enterprise. Its global sales offices grew from five to nine in the past year. Even though rivals and some analysts say it does not yet have the product and security features demanded by large customers, that hasn’t stopped the likes of News Corp, Under Armour and Facebook from signing up. “Security is very top of mind for us,” says Brian McManus, Under Armour’s senior director of IT, who has deployed Dropbox to more than 3,000 employees. “It met our needs.”

Dropbox is private and does not disclose financials, but people close to the company say the numbers are healthy. Annual revenue is well north of the $400 million figure that appeared in published reports, and it’s growing faster than the 55 percent reported by IDC recently, these people said. Dropbox for Business alone brings in well over $100 million annually. What’s more, Dropbox has kept the bulk of the cash it has raised, funding its growth through operations and putting off the need to go public soon.

While Dropbox has suffered some executive departures, it continues to be a talent magnet. Last year it recruited Dennis Woodside, a Google veteran who was CEO of its Motorola unit, to be COO. In one week alone in July, it added a Microsoft veteran as its vice president of global sales and a product whiz with stints at Google, Facebook and Twitter as vice president of product. With 1,000 employees in San Francisco and more elsewhere, it’s bursting at the seams of its still-newish 230,000-square-foot headquarters across from AT&T Park and is building another 292,000-square-foot office a couple of blocks away. “There is a massive, massive opportunity in front of us, much bigger than what we’ve captured so far,” says Ferdowsi.

While Houston is the public face of Dropbox and Woodside is charged with expanding the business, Ferdowsi, who rarely gives interviews, lurks in the background and sweats the details, going from project to project to fix products or processes that need attention. He’s known as the “chief debugger” for his propensity to file bug reports at all hours—3 am missives are not uncommon. While he no longer codes, he is still the one making sure the company’s growing family of products remains unified and retains a simplicity of design and ease of use.

Ferdowsi grew up in Overland Park, Kansas, the only child of Iranian immigrants. He finished first in his high school class and headed to MIT. It’s there that he met Houston, who first developed Dropbox out of frustration after he forgot to bring his thumb drive with important files on a trip. When Houston got admitted to Y Combinator, the Silicon Valley accelerator known to mint tech powerhouses, its founder, Paul Graham, urged him to find a partner. A friend suggested Ferdowsi. The two met for just a few hours before agreeing to team up. Shortly after, Ferdowsi dropped out a year before graduation to work on Dropbox full-time.

An early clash between the two shaped Dropbox’s identity. The pair was planning the first corporate email to all users. Houston would do most of the writing, while Ferdowsi would deal with graphics. Working with another early employee, Ferdowsi came up with a stick-figure animation to illustrate the Dropbox product. Houston thought the cartoonish look did not befit a startup that aspired to become a real company. Ferdowsi insisted that a potentially complex product like Dropbox needed to be accessible to all. He won the argument, and to this day Dropbox is known for its hand-drawn logo and animations.

Now Ferdowsi is focusing with similar intensity on things that will shape Dropbox for years to come. After COO Woodside noted that Dropbox’s rivals were innovating at a faster pace, Ferdowsi took the criticism to heart and “completely changed the product-release approach,” Woodside says. The result: Dropbox rolled out 75 new features and product improvements in the final quarter of last year, up from 49 in the third quarter. Ferdowsi recently redesigned the hiring process to speed it up, appointing a group of “debrief moderators” to collect feedback from interviewers so that no concerns go unaired.

Ferdowsi’s focus on Notes, the new collaboration app, underscores one of Dropbox’s new challenges. With the Googles and Microsofts of the world offering file storage and synch along with other apps, the table stakes in the business have risen considerably. Dropbox has had to make its service go beyond its original purpose by linking to some 300,000 third-party apps that interact with its technology. The company is also building its own apps to complement its core product. Some consumer products, such as Carousel, a photo app, and Mailbox, an email app, may struggle against better-known rivals in competitive categories. But Dropbox needs to focus on productivity to move into the business world.

“Synching the bits back and forth is not enough,” says Ferdowsi. “You have to build engaging experiences on top of that.”