With World Peace Day on September 21, here are some unusual ways in which people called for an end to hostilities 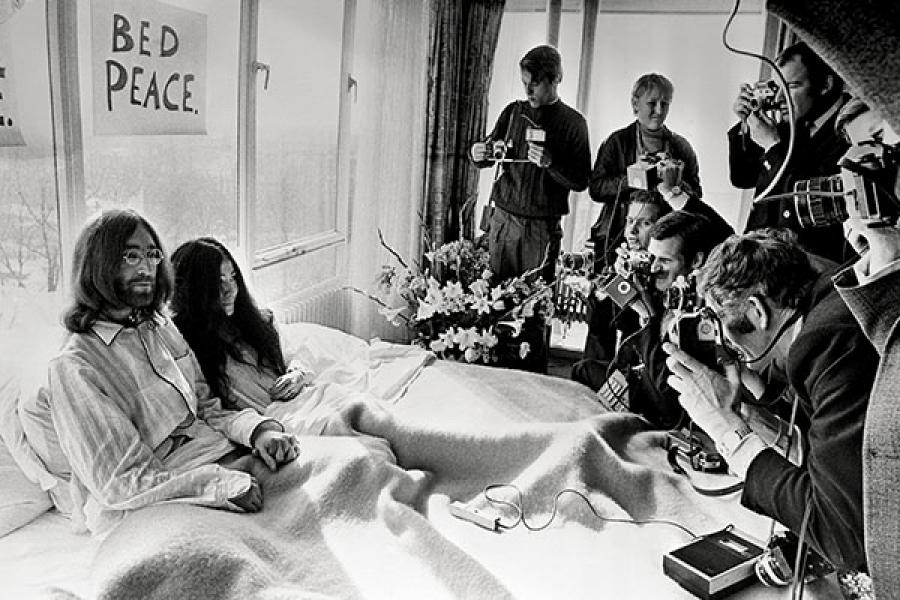 Image: Getty Images
Beatles singer John Lennon and wife Yoko Ono interact with the press from the presidential suite in Amsterdam’s Hilton Hotel on March 25, 1969. They stayed in bed for seven days to protest against war and violence in the world

1. Bed-ins: Against the backdrop of the Vietnam War, in March 1969, John Lennon and Yoko Ono—following their much publicised marriage—spent their honeymoon in the presidential suite of Amsterdam’s Hilton Hotel by inviting the press into their rooms between 9 am and 9 pm. This ‘bed-in’ (inspired by peaceful sit-ins in front of establishments) was supposed to be a non-violent protest against war. Lennon and Ono had a second bed-in in Montreal. The couple also sent acorns to heads of state for them to plant as symbols of peace.

2. Peace, served quick: Late this August, Burger King sent McDonald’s an open letter, proposing that they join hands to create a hybrid ‘McWhopper’ burger to celebrate World Peace Day. Burger King suggested that the “ceasefire” would take effect at a single pop-up shop located halfway between the headquarters of the two firms; proceeds from sales would go to the Peace One Day charity. McDonald’s has declined the offer, with CEO Steve Easterbrook saying “we love the intention but think our brands could do something bigger to make a difference”.

3. Pushing it: World peace is often the much-maligned ambition of beauty pageant winners; or the oft-repeated goal of those who embark on strange missions. Like Nepal’s Biresh Dahal, who has reportedly ridden a bicycle backwards across three continents over the past decade.

4. All’s in a name: In India, we are accustomed to people adding and dropping letters from their names. But changing your name entirely? In 2011, basketball player Ron Artest, then with the Los Angeles Lakers, changed his name to Metta World Peace.

5. Kiss and make up: As the Israeli offensive continued in Gaza in July last year, Twitter was abuzz with photographs of couples kissing, children holding hands, and such like. Nothing unusual, except for the fact that one of the two in the photograph was an Arab, the other a Jew. The photos were accompanied by the hashtag #JewsAndArabs RefuseToBeEnemies. While it is not unusual for people of different communities to get along fine, this spontaneous call for tolerance was heartwarming.