ExxonMobil's strategy for the low-carbon future 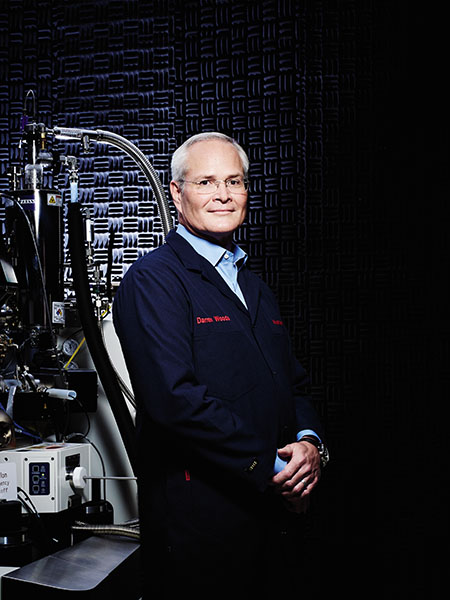 Exxon CEO Darren Woods with a helium-ion microscope
Image: Jamel Toppin for Forbes
Darren Woods strides down the long linoleum halls of ExxonMobil’s research centre in Clinton, New Jersey. Named Exxon’s CEO in January 2017, the tall 53-year-old electrical engineer is comfortable here in this nerds’ paradise, nestled safely on 750 bucolic acres, behind gates, armed guards and X-ray scanners. Ex­xon’s legions of scientists, including the 300 based in New Jersey, are spending $1 billion a year trying to solve one of the greatest challenges of our time: How to reduce emissions while supplying ever more energy to a world Exxon expects to grow to 9 billion people by mid-century. Woods agreed to meet Forbes here for an exclusive interview, thousands of miles from Exxon’s executive God Pod outside Dallas. The point is to stress that he gets it—carbon dioxide really does threaten to disrupt the global climate. “We understand the risk and that it needs to be addressed,” Woods says. “We’re sincere in that. We believe that.”

But what does that really mean? After all, Exxon is not about to leave oil in the ground, as the anti-carbonistas would prefer. In fact, by 2025, the company intends to boost its US oil production by more than 600,000 barrels a day and to get another 200,000 bpd from giant new discoveries off the coast of Guyana. Exxon’s megatrend watchers figure we will need every drop as the global middle class doubles in size and energy demand grows by 25 percent by 2040. “Go to places experiencing energy poverty. It motivates you,” Woods says. “You can’t just walk away and say, ‘Let’s turn off the valve here’.”

But Exxon is also staring down a perfect storm of regulatory, social and shareholder pressure to clean up its act. What’s needed, says Vijay Swarup, the Exxon exec who runs the Jersey research centre, are innovations that meet the four criteria of being “affordable, scalable, reliable and sustainable”.

It’s an attitudinal sea change for the $260 billion (estimated 2017 sales) energy giant. Lee Raymond, Exxon’s CEO before Rex Tillerson, famously called global warming a hoax and the 1997 Kyoto pact “unworkable, unfair and ineffective”. In 2009, Tillerson softened the party line to support the imposition of a carbon tax and has long pushed clean-burning natural gas as the fuel of the future. But Rex didn’t really get the holistic nature of the problem, asking in 2013, “What good is it to save the planet if humanity suffers?” Just a few months shy of what would have been his retirement date, Tillerson reached a deal to “sever all ties” with the company and become Donald Trump’s secretary of state. Two weeks after he left came the announcement of Tillerson’s career-capping deal: The $6 billion acquisition of 250,000 acres in the red-hot Permian Basin of New ­Mexico and Texas from the billionaire Bass brothers of Fort Worth. Tillerson personally negotiated the deal with his friend Sid R Bass. Woods won’t say whether he’s had any contact with Tillerson since his Rex-it (complete with a $180 million golden parachute) but intends to build on his legacy. “It’s an unselfish culture,” Woods says. “The expectation is that the next guy comes in and does it better.”

Doing it better means doubling down on green tech. Exxon has promised to spend $600 ­million on a venture with Craig Venter (who was the first to crack the human genome) and his Synthetic Genomics. The partnership started in 2009, and last summer they finally revealed a breakthrough. “We figured out the genetic pathway by which algae make lipids,” Swarup says, referring to the fat cells that would be the building blocks of a sustainable algae oil. “Now we’re going to do it at scale.” But Woods, who spent the past dec­ade running Exxon’s refining and chemicals division, isn’t interested in showing off a single batch of algae-derived jet fuel. What he wants is a 450,000-barrel-per-day Franken-algae refinery. And 20 years down the line—“aggressively patient” in Exxon-speak—the company just might get there. 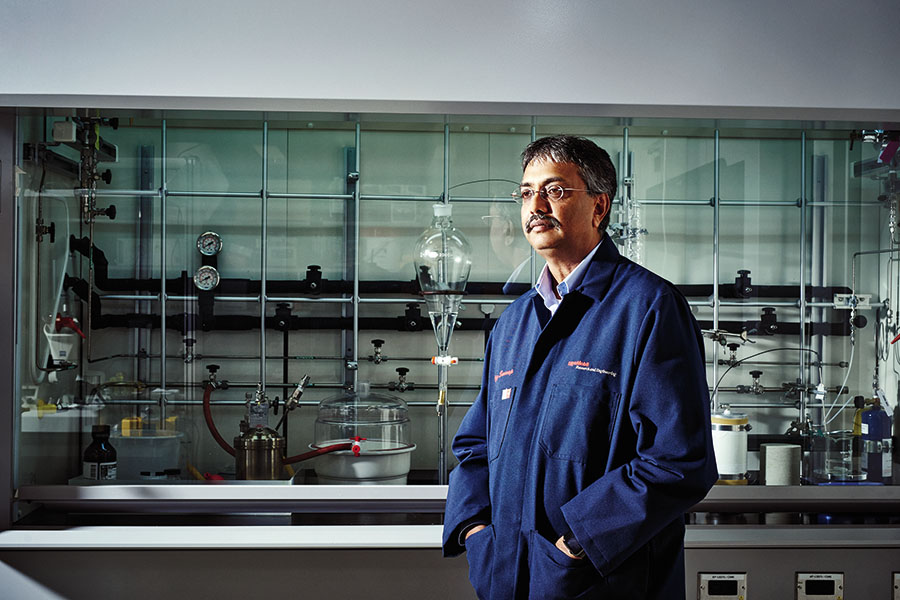 “We’re not going to PowerPoint our way out of this problem,” says Vijay Swarup, lab chief. “We’re going to science our way out.”
Image: Jamel Toppins for Forbes

In the nearer term, Exxon is working with publicly traded FuelCell Energy to perfect a system that diverts carbon dioxide and other emissions from power plants, mixes them with methane, and pipes them into a series of fuel cells that electrochemically transform the gases into electricity plus a concentrated stream of 90 percent carbon dioxide ready to be pressurised and injected deep into the earth. What caught Ex­xon’s eye: Unlike other carbon-capture systems, this one is not a power parasite. “It’s like saying unicorns are real,” says Tim Barckholtz, a senior Exxon scientist with a PhD in chemistry. Like a giant battery, the fuel cell is a 10-by-10-foot cube. Two of them are being installed at a coal plant operated by Alabama Power. A 500-megawatt plant would need the capacity of around 175 cubes to capture nearly all of its carbon dioxide (and other pollutants) and would see its long-term cost of making power rise from 6 cents per kwh to 8 cents. That’s borderline economical, especially if Congress enacts a carbon tax or an oil company wants to buy the CO2 to inject into old oil fields to goose out more crude.

Despite these advances, it’s easy to be cynical. Exxon has a long, sad track record of knowing the “right thing” to do—and then not doing it. In 1978, Exxon climate researcher James Black wrote a report titled “The Greenhouse Effect”, warning that carbon emissions could spur a two-degree rise in global temperatures and suggesting that the world had ten years to figure out what to do. “It is premature to limit use of fossil fuels but they should not be encouraged,” he wrote. Also in the 1970s, Exxon scientists invented the lithium-ion battery, but the company didn’t bother to commercialise it, investing instead in coal and uranium. Then came the Exxon Valdez spill.

Just last year, a federal judge imposed $20 million in fines on Exxon’s Baytown refinery complex near Houston for excessive emissions. Plus there are those plasticisers: Chemicals that Exxon adds to plastics to make them more malleable. In recent years, plasticisers have been found to disrupt the endocrine systems of toddlers who chew on rubber toys. What other toxins are they not telling us about? “That’s not helpful. We’re the exact opposite,” says Swarup. “We are in the community. Our kids go to school, our kids drink water, our kids play with toys.”

That won’t placate New York attorney general Eric Schneiderman, who has been investigating ExxonMobil since 2015 for conspiring to defraud shareholders by concealing the risks of global warming. Company attorneys call it “a fishing expedition”. And then there are the shareholder activists. Last year’s annual meeting was a wake-up call; activists passed, with 62 percent of the vote, a resolution calling on the company to disclose its plan for coping with rising temperatures and to assess the “viability of its assets as a result of the transition to a low-carbon economy”. Scary thoughts when you pump the equivalent of 4 million barrels of oil per day.

Woods chose not to ignore the non-binding resolution lest he ignite the ire of stock-indexing giants BlackRock, Vanguard Group and Fidelity Investments, all of which supported the vote. “They used to be dismissive, arrogant,” says Tim Smith, a director at Walden Asset Management who has prodded Exxon for a dec­ade. “Their tone is changing.” Last year’s biggest shocker: Naming Susan Avery, an atmospheric scientist and former head of the Woods Hole Oceanographic Institution, to Exxon’s board. “It’s a start,” says Andrew Logan at investment consultant Ceres, “but the world is changing even faster than Exxon.” Logan ranks the company well behind Royal Dutch Shell, Statoil and Total (but ahead of the likes of PetroChina and Saudi Aramco) on climate and governance issues.

Woods denies that activists pushed him to act. “I would separate out the climate resolution,” he says. “We’d be having this conversation with or without it, quite frankly. We’ve been engaged with this stuff for many, many years—long before those proxy proposals.”

Exxon isn’t bending to activists’ desires; this isn’t shameless greenwashing à la BP’s 2006 rebranding as Beyond Petroleum. Nor will we see a willy-nilly smorgasbord of alternative-energy boondoggles. Wind? Solar? No. “We don’t have a lot to offer in that space,” Woods says.

But Woods is also clear. Any “real solutions” will require imposition of that elusive carbon tax. “If society wants to address this issue, you’ve got to have a price on carbon,” he says. “That’s what’s going to be required. Government has to take that action, and society has to be willing to pay that price in order to align the motives and solve this.” Be careful what you wish for. It just might end up being called the Exxon tax.

Tweets by @forbes_india
How do parties bargain when negotiating in the glare of public spotlight?
All You Need to Know About Personal Loan Balance Transfer