Good at strategy games? You could become a software mogul

The story of Matt Calkins, board game god and geek billionaire 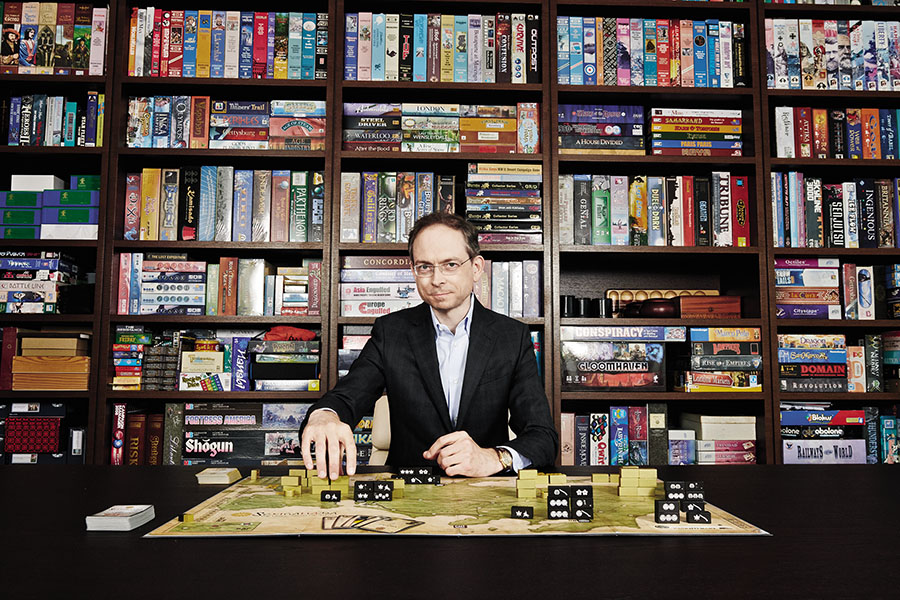 From his home in Rosslyn, Virginia, Appian CEO Matt Calkins finds board games give him a boardroom edge: “It’s a great way to evaluate complexity.”
Image: Jamel Toppin for Forbes

I feel like I should apologise,” Matt Calkins tells his opponent as they shake hands. It’s mid-evening in the log-lined cafeteria at the Seven Springs Mountain Resort, and Calkins, from a trailing position, has just played a decisive move in the board game Sekigahara. His opponent shakes his head at the suggestion Calkins prevailed through luck. “You sprung a trap on me,” he says.

Luck? Nonsense. Calkins is a board game whiz. That has something to do with being a business success. On the side, when he’s not designing or playing games, he runs Appian Corp, a Reston, Virginia, firm that sells software to help businesses build apps more quickly. Appian, which went public in 2017, is worth $2.1 billion; Calkins owns just under half.

The Seven Springs event last July drew 1,700 players to the Allegheny Mountains of southwestern Pennsylvania to compete in 185 games. Calkins wasn’t just a player. He created two of those games: Sekigahara, which re-creates a decisive battle of shogunate Japan, and Tin Goose, which challenges players to build one of the first commercial airlines.

And then there’s his other life. Calkins, 46, co-founded Appian 20 years ago; it initially built software tools, such as an intranet portal for the US Army. Since 2004 the company has been tackling the bigger problem of making digitisation less coding-intensive for programmers. With Appian software, a ­corporate client can create its own applications (say, for a bank’s users to check their balances or for a government agency to handle payments) at a lower cost than it could on its own.

What’s that got to do with designing games? Both involve breaking down every big concept or rule to its simplest mechanics. “I like understanding complicated things and rendering them comprehensible,” Calkins says.

Growing up just north of San Francisco, the son of a real estate developer and a math teacher, Calkins spent his time camping, studying music and playing games. At Dartmouth, where he graduated in 1994 as the top economics student in his class, Calkins migrated from the tactics of the strategy game Diplomacy to the intricacies of game theory (one of his thesis paper explained when a losing hockey team should pull its goalie). He took a few computer science courses and after college joined MicroStrategy, a business software vendor that saw meteoric success (and then a stock-market crash) in the dot-com bubble.

By 1999, Calkins and three friends were meeting to teach each other coding languages. He left MicroStrategy that year to launch Appian with them. “I thought, I can do this,” Calkins said. “Overconfidence helped.”

Other startups soared after raising large sums from venture capitalists (VCs) and then flamed out just as fast. Calkins bootstrapped. Appian wouldn’t seek major outside funding until 2008, when it raised $10 million, followed by a $36 million round led by VC firm NEA in 2014.

Appian’s shtick is “low code”. By offering building blocks of code to businesses, Appian shortens the time it takes a customer to make its own app. Appian handles all the trickier details, like making sure the app works across Web browsers, mobile devices and computers. Customers like Sprint and Bayer AG gain peace of mind; at Goldman Sachs, even well-trained engineers used Appian to assemble programs quickly without having to write them from scratch. “It’s not just faster but more powerful software,” Calkins says.

Demand for Appian grew as more companies realised that customers expected the same streamlined experience they knew from their ­favourite smartphone apps. Sales and its stock, nearly triple its IPO price, soared—though not profits. Like many software-as-a-service companies, it still runs at a loss to support increased marketing and R&D.

While he managed the company, Calkins kept up his competitive board gaming. He has collected 700 games and dissects them for their mechanics. For almost two decades, he has been a regular at the World Boardgaming Championships, missing days here and there, such as for a Morgan Stanley summer conference the year before Appian went public.

“ If you lose concentration, you die. And that’s true in business.”

Games provide a clear feedback loop, Calkins says. Each game starts from equal footing. It has only two true outcomes, a win or a loss. Calkins doesn’t lose much, but when he does, he’ll re-create the crucial position and stay up all night studying it. “I come back from a tournament and my mind’s just going a million miles an hour,” he says. “I feel like all the meetings have just slowed down because I’m catching so much detail and I’m aware of everybody around the table.”

One of Appian’s competitors is the Boston firm Pegasystems. That outfit is run by Alan Trefler, also a billionaire Dartmouth grad and, not so surprisingly, co-champion of the 1975 World Open in chess. Playing games requires you to hone your pattern recognition and evaluation skills and develop a sixth sense for mistakes, says Trefler. “If you lose concentration, you die. And that’s true in business.”

Designing board games forces Calkins to distill historical narratives and hundreds of feature choices into a coherent set of rules. The result has to be fun, too; his friends shunned early versions of Sekigahara as tedious and overly complex. The work flow of an Appian client’s needs requires a similar process.

The game and software worlds intersect at Appian, which boasts its own board game library. Employees are invited to monthly gaming nights at Calkins’ house; all 42 interns showed up to one session last year. “Junior staffers want to try to win games against him,” says David Metzger, Appian’s vice president of talent, who befriended Calkins at the board game championships. “Not many are successful at it.”

The challenge may be enough to keep young talent from jumping ship for a flashier venture in Silicon Valley. BTIG analyst Joel Fishbein notes that while Appian has well-positioned technology and a strong relationship with consulting firms like Accenture, PwC and KPMG, it faces an uphill perception battle about its category, which, though in “early innings”, does not have the allure of artificial intelligence or rocket ships.

This summer Calkins will be back competing in Seven Springs, looking to top his 2018 showing, when he swept two categories and finished seventh overall. He’s unperturbed by the attention and says he plans to be solving problems in both environments for a long time. “You are what you did at your last game,” he says. “Don’t tell us who you are. Just sit down and show it.”

Tweets by @forbes_india
The oil market shows it can take a punch
Comic: Smart phone or smart aleck?