Green gas: The power plant that promises to capture all its polluting carbon 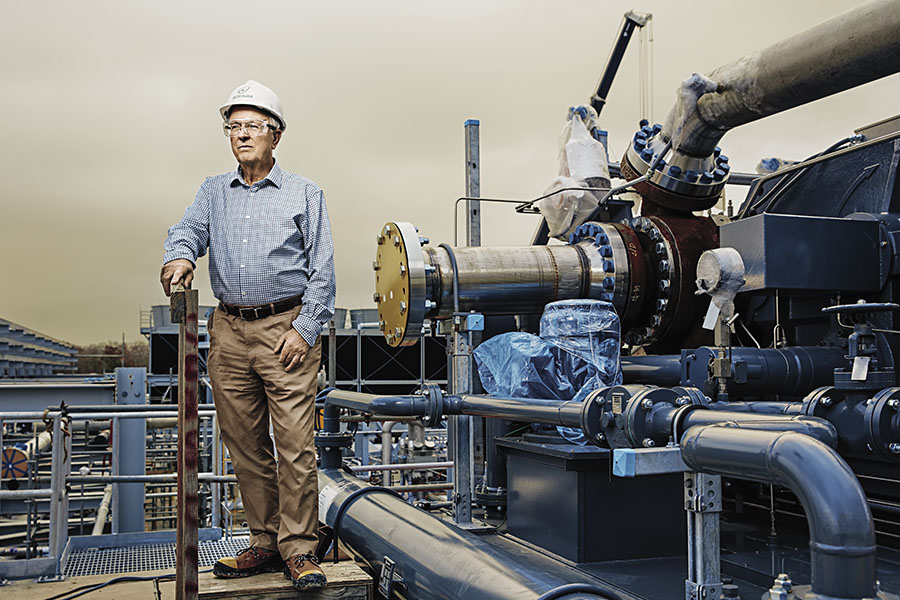 NetPower’s Rodney Allam stands astride his invention: A power plant that captures its own carbon, at no extra cost
Image: Michael Thad Carter for Forbes


Growing up in England after World War II, “all the youngsters like me were obsessed with aircraft,” says Rodney Allam. “I had a picture on my wall of Chuck Yeager when he broke the sound barrier in the Bell X-1, the earliest turbine-driven aircraft.” Those high-powered machines were inspirational. Allam became a chemical engineer and went to work at the UK division of Air Products & Chemicals, based in Allentown, Pennsylvania. There in the 1970s, he became obsessed with an idea: How to capture the carbon-dioxide (CO2) emissions from the UK’s giant coal-burning power plants? He already knew where to put the CO2. BP and Royal Dutch Shell would jump at the chance to inject it into their vast oilfields in the North Sea. Injecting the gas (which acts as a solvent to free up stubborn crude oil) has long been a common practice in West Texas fields, where oil companies tap naturally occurring reservoirs of CO2. But there were none of those in England.

Allam explored various bolt-on methods to grab the CO2 from a giant 2,400-megawatt coal plant in Scotland. But none came close to viability. For a simple reason: They were too expensive. He became obsessed with making carbon capture affordable: First for the technical challenge and then out of an impetus to slow CO2-induced global warming. “I tried like hell,” he says, “but I gave it up in the early 1990s—couldn’t make it work.”

But now he has. In December 2016, Allam, 76, flew from his home in the UK to meet Forbes at a construction site in Texas near the Houston Ship Channel, the heart of the nation’s largest petrochemical complex. When completed early this year, at a cost of about $150 million, these 5 acres of steel and concrete, pipes, tanks and high-voltage lines will become the proving ground for a technology called the Allam Cycle. It’s a novel electric-generation system that burns natural gas and captures all the produced carbon dioxide. The best part is that it makes electricity at the same low cost as other modern gas-fired turbines—about 6 cents per kilowatt-hour.

Environmentalists are hopeful. “It’s not just a bridge, it’s a destination,” says John Thompson, who directs the carbon-capture programme at the Clean Air Task Force. Renewable energy sources haven’t scaled fast enough to replace fossil fuels, and zero-carbon nuclear is too expensive. “We’re going to have to use fossil fuels in the future whether we like it or not,” Allam says. “The challenge will be in using fossil fuels to produce electricity without emitting CO2 into the atmosphere.”

Allam left Air Products in 2005 after 44 years. In 2009, he got a call from 8 Rivers, a venture capital incubator in Durham, North Carolina. Bill Brown, 8 Rivers’s co-founder, saw piles of federal Recovery Act money available for research on carbon capture and sequestration. It wasn’t hard to rev Allam up again. Soon he was sending handwritten brain dumps to the cadre of young engineers at 8 Rivers. Within six months, Allam completed the design.

8 Rivers worked with engineering power­houses Fluor and Babcock & Wilcox to refine and verify the tech. Brown, formerly of Goldman Sachs and Morgan Stanley, presented it to whoever would listen. “Nobody believed us,” Brown says. “They thought I was selling snake oil.” They had reason to doubt. Bolt-on systems for carbon capture exist, but they reduce efficiency. And they’re expensive; Southern Co is $4 billion overbudget so far on its “clean coal” plant in Mississippi. “Companies don’t want to just slap a box on the back of a power plant,” says Julio Friedmann, carbon-capture expert at Livermore National Laboratory. “They want an integrated solution.”

Which is what the Allam Cycle gives them. To understand what this cycle is, start with what it isn’t. Most power plants that burn coal or natural gas use the heat to create steam that goes through a turbine, spins rotors and creates electricity. In many generators, half the useful heat shoots into the atmosphere along with steam and, of course, carbon dioxide. Allam’s cycle doesn’t use steam. Instead, the so-called working fluid that turns the turbine is carbon dioxide itself. The CO2, under pressure and heated to a manageable 1,000 degrees, is kept in a super-critical state, in which it can expand to fill its container like a gas, yet has the density of a liquid. Instead of pouring into the sky, that CO2 gets cycled in a loop, spinning the turbines that power the generators. Combustion continually adds additional CO2, while excess CO2 is directed off into a pipeline.

The third equal partner in the company, which is now called NetPower, is publicly traded engineering giant CB&I (aka Chicago Bridge & Iron). Since 2012, NetPower, which will own the new Houston facility, has been working with Toshiba to engineer and build the combustor system for the first Allam Cycle plant—an R&D effort that has cost the Japanese company at least $200 million, which it plans to recoup as orders roll in.

A full-size NetPower plant will generate 300 MW and 800,000 tonnes of CO2 per year and cost around $300 million to build. “The plan is to build these in oil regions, then transport the power,” says Daniel McCarthy, head of tech investments at CB&I. “If you can generate power without carbon dioxide and with no economic penalty versus ­existing technology, why wouldn’t you do that?” It’ll take a few months of operation before NetPower can prove the stability of the cycle. Allam predicts his invention will soon sell itself: “In a year we will know for sure.”