Three years ago, HYT introduced innovative hydromechanical watches that were prized by collectors and disrupted the industry. Then a $23 million investment came flooding in 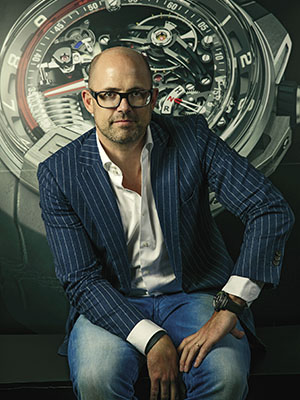 Image: Laura Steven for Forbes
Water works: HYT co-founder Vincent Perriard (with an H2 watch in the background) is expanding the business to include lower-priced timepieces with increased production

Water is a watch’s mortal enemy, but five years ago, Swiss entrepreneur Patrick Berdoz saw an astonishing concept he thought was visionary: Using liquid to indicate time. There have, of course, been water clocks for thousands of years, but no one had figured out how to create one that was wrist-size. So, along with three partners—including nuclear engineer Lu­cien Vouillamoz, who developed the innovative fluid system—Berdoz launched HYT, a watch brand whose raison d’être is producing hydromechanical timepieces.

The principle behind HYT’s groundbreaking watches is two immiscible liquids that flow from bellows, through a capillary powered by a mechanical movement to indicate the time on the watch dial. The complex, revolutionary system would not have been possible without the help of sister brand Preciflex, which makes liquid indication devices for the medical, design and automotive fields. Both companies were chaired by Berdoz—who has bought and sold a number of medical and real estate businesses—and HYT watches began production in 2012.

Starting with $30 million (including funds from Berdoz and private evergreen investor SVC, or Swiss Venture Club) to develop technology that did not exist in the industry before, Berdoz brought in watch veteran Vincent Perriard, who had successfully headed up TechnoMarine and Concord, to serve as CEO of HYT.

What the three men devised for HYT are watches that are complex not only in their technology but also in their design. The futuristic fluid system is set in cases that are atypical for the watch world. And collectors—particularly in Asian markets—can’t get enough of these timepieces, which sell for upwards of $50,000. In 2013, the first full year of sales and production, HYT made about 150 watches. Last year, it turned out 400. Revenue has grown accordingly: Berdoz claims sales of $4.6 million in 2013 with growth of about 40 percent in 2014 and another 20 percent in 2015.
Berdoz says he expects 20 percent growth in 2016 as well. And he is being conservative. Just after Baselworld 2016 in March—the world’s largest watch exhibition—orders for HYT watches were up by 30 percent over the same period in 2015. 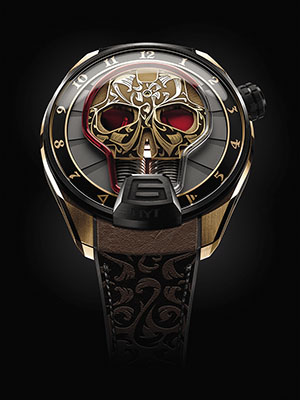 But it’s the new investment money that came pouring in that has HYT set to take its growth to a whole new level. In February, the brand received another $23 million in capital—including funds from Nestlé Chairman Peter Brabeck-Letmathe—for expansion into new markets and new fields.

“This liquid technology is so promising that there is so much room for growth,” Berdoz says. “That is why we raised the $23 million—to address the needs of the market, to be able to animate the brand in new ways moving forward.”

The new capital will also allow HYT to reduce the prices of a soon-to-be-released line of watches with an all-new movement. Referred to in-house as X Series, the new movement is smaller and a lot more affordable. With it, HYT can unveil watches that are slimmer and have a more approachable price range of $25,000 to $35,000. Additionally, Berdoz expects the new line (slated to be unveiled in 2018) will be produced in “thousands of ­pieces per year”.

“HYT has a DNA as a luxury brand, so we will never be priced lower than the mid-20s, and we will always be hydro and mechanical,” Vincent Perriard explains. “But with this new movement, we can accelerate growth by offering this smaller, thinner size, and by adding functions and complications. It opens a new frontier for us.”

The new investment has also led to another development for the two companies. This one, code-named Aqua Quantum, is a line of liquid-display watches and jewellery in the fashion realm, with an entry price of $300. There will also be a collection of smartwatches because the liquid can be used to display different functions. In addition, Preciflex is exploring new fluid-driven medical de­vices, and HYT is poised to open a US subsidiary that offers an after-sale programme with fluid specialists to service customers’ watches.

“These new products will not be made under the HYT brand name, and because of the price and design concept, they will not compete with our business. It is a hybrid,” adds Perriard. With prototypes already in hand, Preciflex is exploring production options that involve either establishing a separate company to produce and market the fashion line or working with a watch brand that is capable of mass production. In other words, the floodgates are open.