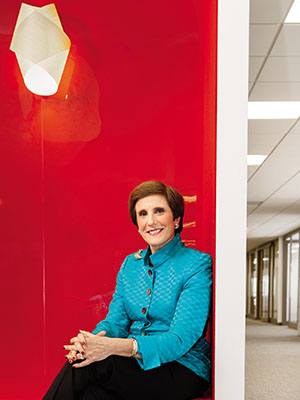 Image: Sara Stathas for Forbes
“This is an incredibly exciting time for the company,” Rosenfeld says. Her investors are less enthusiastic so far

It’s a bright, warm February day in Boca Raton, Florida, but Irene Rosenfeld doesn’t look happy. At an industry conference one week after reporting disappointing fourth-quarter results, the chairman and CEO of Mondelēz International, formerly Kraft Foods, is defending her new company under a barrage of questions from irritated financial analysts. One wants to know what’s really changed after the spinoff. Another barks: “You said you’re getting frustrated? Well, we’re getting frustrated, too.” Yet another wants to know why she didn’t disclose before the earnings release that the company was having execution issues in Brazil and Russia. Beneath her no-fuss cropped red haircut and chic white blazer, her mouth hardens into a thin, straight line. “I deeply regret it impacted my credibility with you, but I don’t know what else could have been done,” she says. “The long-term prospects are quite robust.”

Rosenfeld, 59, is no stranger to big risks—or criticism. When she staged a $19 billion hostile takeover of British candymaker Cadbury in 2010, lead Kraft investor Warren Buffett publicly called the deal “dumb” and reduced his stake. The following year, UK lawmakers questioned Kraft’s ethics and commitment to the UK when she didn’t show up to hearings in Parliament.

She surprised the business community yet again with a 2011 decision to split Kraft into two separate companies: An $18 billion (sales) North American grocery business that retains the name and a $36 billion (sales) global snacks company, Mondelēz. The split was completed in October 2012, but the last two quarters—Mondelēz’s only two quarters—have underwhelmed, with sales down 1.9 percent in the latest quarter. The stock has been flat since October, despite an 8 percent rise in the S&P. She made a bold bet. Now she has to deliver.

“This is an incredibly exciting time for the company,” Rosenfeld tells Forbes shortly before earnings were released. “We have created a $36 billion startup. The combination of a new company with a new name has given us the opportunity to stand back and refresh.”

The reimagined Mondelēz, an invented word born from an employee contest, holds on to powerhouse brands like Oreo cookies, Trident gum and Cadbury chocolates, while spun-off Kraft keeps icons like Maxwell House coffee, Oscar Mayer deli meats and JELL-O puddings. (Planters Peanuts, both a snack-food and grocery-store staple, proved the most difficult to place, Rosenfeld says, but ultimately stayed with Kraft.) With 44 percent of revenues coming from developing markets and 75 percent of its portfolio in the growing snack category—and the interplay between the two, since snack consumption rises with GDP—Mondelēz is positioned as a high-margin, high-growth company.

“There have been hiccups in execution,” says Morningstar analyst Erin Lash. Among them: Difficulty splitting the sales teams in Canada, pricing coffee and chocolate too high in Russia and failing to anticipate a gum slowdown in Brazil and therefore shipping too much inventory. “Mondelēz is supposed to be this faster-growing business, but the sales have been lacklustre.”

“We’ve set some very aggressive growth targets for this new company,” Rosenfeld says of the 5 percent to 7 percent revenue increase she’s promised over the long term and the 5 percent promised for 2013—stripping out acquisitions, divestitures and currency effects. They’ll get there, she says, by taking her brands in the cookie, chocolate and gum-and-candy categories and slowly scaling them in developed markets like Europe, quickly growing them in the developing BRIC markets (Brazil, Russia, India and China) and planting the seeds in ‘next-wave markets’ like the Middle East, Africa, Indonesia and Latin America.

In 2006, when Rosenfeld took the helm at Kraft after a two-year stint as CEO of Pepsi-Co’s Frito-Lay division, selling Oreo cookies in China seemed like a lost cause. It was a tiny $30 million business that was losing money, largely because executives in Chicago expected to just drop the American sandwich cookie into the Chinese market and watch it fly off shelves. Instead, “it was too sweet, too big and cost too much”, says Rosenfeld. She leaned on Kraft’s local Chinese leaders to come up with a regional concept—a wafer format in subtler flavours like green-tea ice cream—to pair with Oreo’s global twist-lick-and-dunk marketing premise. Today, China is the second-largest Oreo market, a $600 million business growing 30 percent a year.

Rosenfeld, who has a PhD in marketing and statistics from Cornell University, has replicated this ‘glocal’ strategy—the pairing of global ideas and local insights—several times over. Mondelēz’s new BelVita biscuits are positioned globally as energy-sustaining and are marketed as a breakfast food in the parts of Europe and Latin America where eating biscuits for breakfast is common. Similarly, an aerated chocolate innovation called Bubbly is being applied across different regionally popular brands (Milka in Germany and Lacta in Brazil) and will soon be in 20 countries. However, a continued sticky spot for Mondelēz is chewing gum, a $3 billion business for the company that saw steep revenue declines in developed markets in the fourth quarter. Rosenfeld attributes the drop to economic weakness, high unemployment among young adults and aggressive pricing by both Mondelēz and category leader Wrigley. “Irene is looking for someone to blame on gum,” says Marcia Mogelonsky of market research firm Mintel. “They’re not doing enough innovation.”

Rosenfeld admits as much. “We need to get gum back,” she says. “I’d like it to happen faster than it’s happening, but it will not get in the way of our ability to deliver on the vision of this company.” She says her greatest challenge is “unleashing the power of our people” and lives by mantras: “Cut the crap”, “Keep it simple” and “Speed is the currency of a growth company”.

She moved Mondelēz to new headquarters near Chicago, installed an open floor plan and got rid of most offices, including a drastic downsize from her former C-suite, so that leaders are more visible. Irene “seems to operate with a lot of determination”, says Morningstar’s Lash. “Ultimately we think they will deliver, but it will take some time.”

“I have many sleepless nights,” Rosenfeld confides. “The thing that keeps me grounded is I do my homework, I figure out where we’re going, and then I stay maniacally focussed on that end point.” The new company has certainly gained focus. Now investors are waiting for traction.