Living in a new Material world

Fungus buildings. Algorithmic chairs. Germ-fighting iPhone cases. Software giant Autodesk and others are ushering in a revolution in materials science you may not even see coming

By Bruce Upbin, A Damodaran 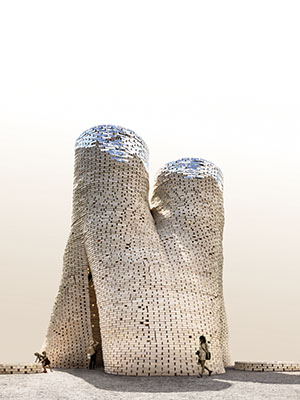 Grow It
Hy-Fi tower
“Swapping new materials for old ones is interesting, but there are so many new designs to explore when you design by computer or biology,” says Brooklyn architect David Benjamin, whose firm, The Living, designed this gravity-defying 41-foot tower. Benjamin wanted to prove he could build a massive, recyclable structure with zero waste and almost no energy. The material: Bricks made of mycelium, a rootlike component of mushrooms, fused with chopped corn stalks in a process developed by Ecovative, a startup in Green Island, New York, that makes eco-packaging and furniture. The bricks could theoretically be made anywhere and at scale for as little as 20 cents. The tower was lit from above using a new specular film from 3M that’s more reflective than any glass mirror. Hy-Fi stood outside MoMA PS1 in Queens, New York, this summer. Much of it is now composting. Benjamin’s firm was acquired recently by Autodesk. 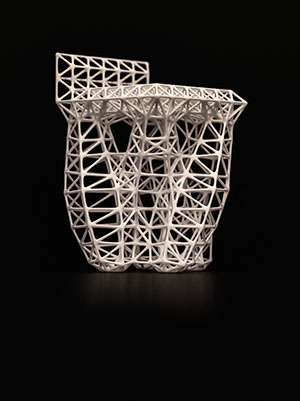 Compute It
The evolving Chair project
The object above is what chairs will look like if we let computers design them instead of people. Architect David Benjamin started with a simple solid chair (right, top), then applied some design software to take out some weight (right, below) and then had the computer figure out on its own, via thousands of simulations, what the optimal design should be for maximum weight and minimum displacement. What emerged was a stronger seat that weighs a mere 6.4 pounds, 70 percent lighter than the solid chair. It was produced in one shot out of a 3-D printer. Algorithm-generated design software, which Autodesk plans to release next year, is starting to produce inhumanly complex and beautiful concepts for lightweight airplanes and bicycles and more efficient heat exchangers. Benjamin is starting to combine this technique with multimaterial 3-D printers to produce parts that are malleable in some places and rigid in others, allowing him to embed latches, hinges and joints right into the part without the need for extra hardware or fasteners. One could also combine metals with plastic in one printing run. “Why should I-beams be made of steel?” asks Benjamin. “What if we could take one and curve it into the shape we want?” 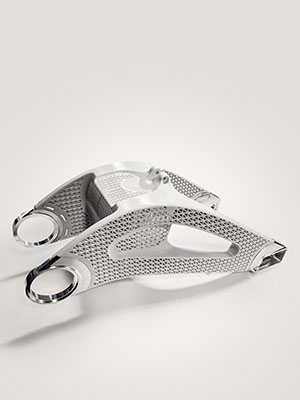 CombIne It
Lightning MotorCycle
Autodesk is partnering with lightning motorcycle to see how advanced 3-d printing could improve the performance of its superfast electric bikes. At its Pier 9 workshop space in San Francisco, Autodesk engineers built this swingarm, which attaches the rear wheel to the frame, by combining traditional manufacturing methods and 3-D printing. Lightning’s original swingarm was a heavy chunk of milled aluminum pipe. Oregon State University undergrad Nathan Fuller, who recently completed a summer internship at Autodesk, started with a printed plastic prototype that was too weak on its own, so he laid carbon fiber over the surface. But the plastic doesn’t bond well with other materials, so he came up with the idea of printing microtextures onto the surface of the plastic that allow the sealant to lock the plastic and carbon fiber together. The finished prototype affixed aluminum only at the ends, while the rest is 3-D-printed plastic, saving weight and material wastage. The next step is to ask an algorithm to come up with a better design, as with the chair on the previous page. A computer mockup shows a swingarm that looks more like bone structure. “Just like your bones will adapt to loads they’re exposed to over time,” says Autodesk’s technology futurist, Jordan Brandt, “that’s what will happen with this”. 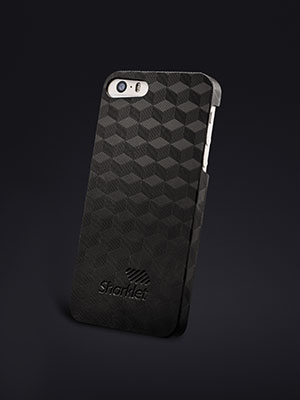 Transform It
Sharklet Smartphone Case
the texture of sharkskin has evolved over millions of years to keep barnacles and algae from forming on the slow-moving beasts. The same principle works for repelling bacteria, too, because germs that can’t take hold will die. Sharklet Technologies, in Aurora, Colorado, has used this idea to develop a new plastic “metamaterial”, a fancy name for a substance that’s transformed to exhibit properties it never had before. The process involves etching grooves as narrow as one-tenth of a human hair into almost any plastic, such as polycarbonate, silicone or polyurethane. The angles of the ridges can be adjusted to repel various substances such as mucus, blood or bacteria without resorting to harsh chemicals. Hospitals would be interested: Infections cost the US health care system close to $10 billion a year. The seven-year-old firm has raised $10 million in venture capital and grants. Devicemaker Cook Medical is testing Sharklet’s plastic as a surface for urinary catheters. It’s going to take a few years of clinical trials before it shows up in humans. But this holiday season you can cut germs by up to 90 percent with Sharklet’s iPhone case.

Tweets by @forbesindia
A leader must lead from the front
Infosys posts 28.6% Y-on-Y jump in Q2 profit, shares rise