Lotte's bet: Joker in the deck

Lotte Tour's new casino resort on Jeju Island aims to cash in, despite South Koreans not being allowed to gamble there 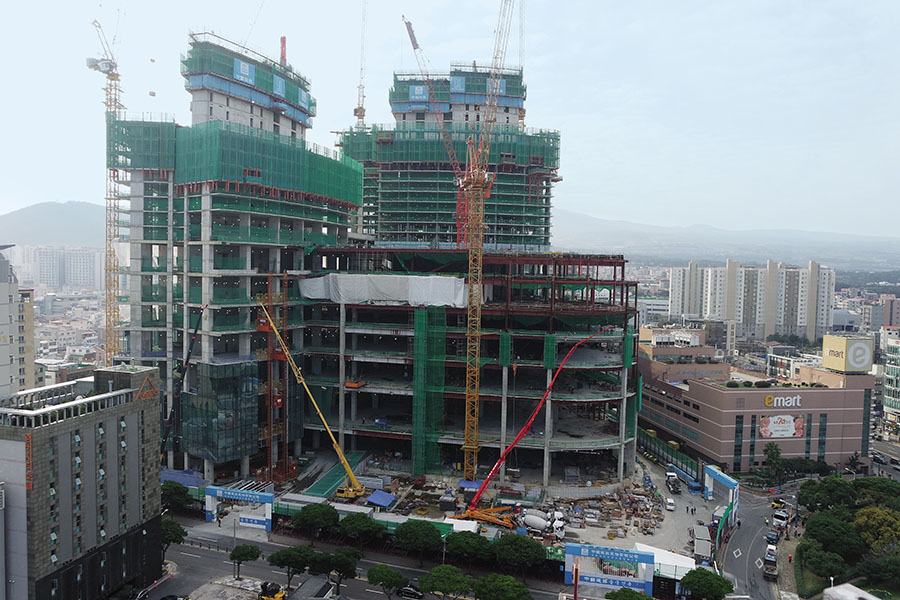 At the center of South Korea’s Jeju Island rises the nation’s tallest mountain, Halla, an icon attracting millions of visitors annually. In the centre of Jeju City, Jeju Dream Tower is rising as the island’s tallest building. At 38 storeys, it can be a new icon in Asia’s increasingly crowded gambling resort space. Making this $1.4 billion bet pay off requires that developer Lotte Tour draw the right cards in local politics, international affairs and the tricky foreigners-only casino business.

That last consideration is the joker in the deck. Only foreign passport holders can enter 16 of South Korea’s 17 casinos. The lone one open to domestic players, Kangwon Land, a 3.5-hour drive from Seoul, raked in $1.3 billion in casino revenue last year, more than the 16 others combined. Sheldon Adelson’s Las Vegas Sands and Wynn Resorts founder Steve Wynn said they would build integrated resorts on the grand scale of Singapore’s $5.7 billion Marina Bay Sands, if only South Korea would allow its citizens to play there.

“We want to be the Marina Bay Sands of Jeju,” Lotte Tour COO Lawrence Teo says, hoping to appeal to the Korean majority of Jeju visitors who can’t gamble. Its twin towers will host Asia’s largest Grand Hyatt hotel with 1,600 rooms, Korea’s biggest pool deck and a top floor observation area with dining and nightlife. Standing 169 metres, three times Jeju’s normal height limit, the towers will have unobstructed views of Mount Halla  and the sea. Under the “modern Korean lifestyle” theme, Dream Tower will feature 24-hour Korean barbecue, hip takes on the Korean diner and jjimjilbang spa plus a Korean designer fashion mall open deep into the night. All told, that should amount to 3,000 jobs and, Lotte Tour says, the biggest source of taxes on Jeju.

Lotte Tour arranged a complex financing deal for one Jeju Dream Tower, to open in late 2019, with China’s Greenland Group. The Korean firm, which was born in 1971 as a separate entity from the country’s larger and better-known Lotte Group (see sidebar), is handling the cost of the other tower and the eight-level podium building. 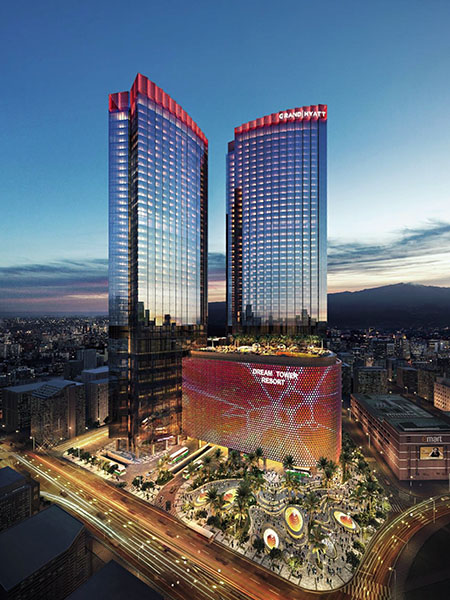 There’s one big non-construction challenge ahead: In July, Lotte Tour purchased a casino elsewhere on Jeju, whose licence it hopes to transfer to Dream Tower. This would set up a full competition with the island’s first integrated resort, Shinhwa World. It opened a half-hour drive away last year and got its casino licence transferred only in February.

A volcanic island 90 kilometres off the Korean peninsula’s southern tip, Jeju has all the makings of a resort rivalry: A milder climate than the peninsula and three UNESCO World Natural Heritage sites amid stunning landscapes with dozens of golf courses, hiking trails and museums. The 50-minute Jeju-Seoul air route is the world’s busiest, averaging 490 flights daily. Jeju International Airport also connects to 19 cities in six jurisdictions, and, unlike the rest of Korea, allows travellers from mainland China and all but a handful of other places to enter visa-free. (Jeju has a special self-governing-province status.) Flights to Jeju from Shanghai (one hour), Osaka (one and a half hours), and Beijing and Tokyo (two and a half hours) are shorter than to Macau and less complicated for Chinese, since they need a visa to enter Macau.

There’s one hitch in that appeal. In 2016, Jeju set records with 15.9 million total visitors and 3.6 million overseas arrivals, 85 percent of them from mainland China. But then South Korea installed the US-produced THAAD missile defence system, which triggered an official reaction by Beijing that has dramatically discouraged Chinese visits—only 323,000 in the first seven months of 2018.

Despite those grim numbers, Shinhwa World demonstrates the financial appeal of integrated resorts. The $1.5 billion IR, developed by Hong Kong-listed Landing International, includes a theme park based on Korea’s Larva cartoons, a water park, 1,450 guest rooms under Marriott, Somerset and Landing brands, plus 880 rooms under construction. Jeju’s largest convention centre with accommodations is on-site, plus there are condos and villas for sale that qualify buyers for Jeju residency. 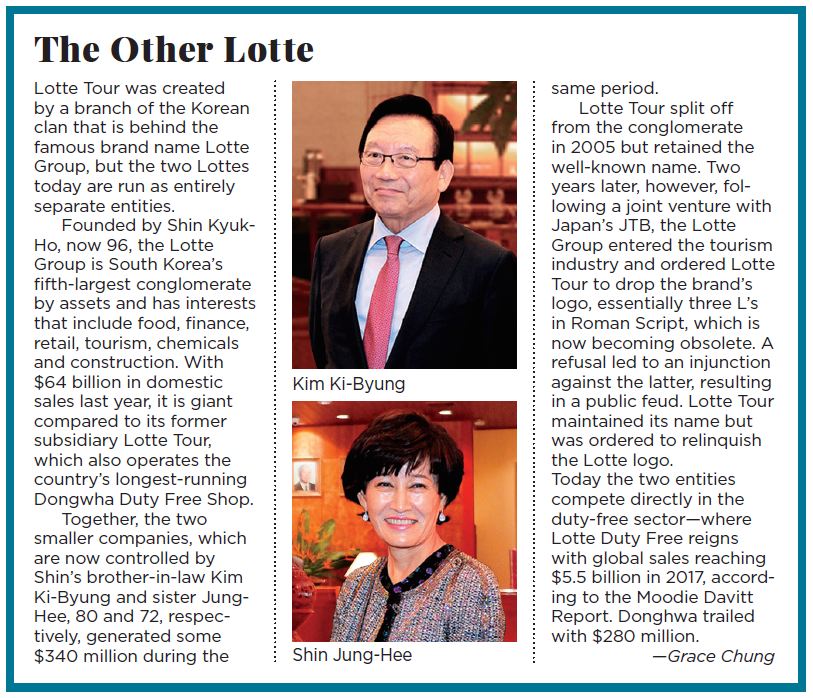 (Landing International, the parent company, had an apparently unrelated issue beginning in August when its founder-chairman, Yang Zhihui, disappeared, reportedly into police custody, in China. A developer from Anhui Province, he had succeeded in recruiting Chinese VIP gamblers to make the crossing to Shinhwa. Yang reappeared in November, and the company stated that he’d been “assisting the relevant department of the People’s Republic of China with its investigation”.)

Participants at a Jeju International Casino Policy Forum last month suggested that any impact on the island’s attractiveness to Chinese will prove temporary. But local attitudes the other way may be a different story.

Jeju has a dialect, culture and cuisine distinct from those of the peninsula, and its residents can be cool to tourism—even as island officials promote it—and especially casinos. Most Jeju casinos were created in the early 1990s by Seoul, as South Korea emerged from military rule but before Jeju received self-governing status. Faced with slowing export growth, Seoul expanded Jeju casinos to earn foreign currency, according to Kyung Hee University integrated-resort expert Won-Seok Seo, a Forum chairman.

The consensus among Forum participants was that Jeju needs integrated resorts to remain competitive in regional gaming, particularly with Japan expected to open the world’s most expensive IRs within a decade. “We have to prepare for this situation. Rather than status quo or [business as usual], we need to set up more resort type casinos,” Korea Culture & Tourism Institute researcher Kwang-min Jeong says. “We will have regulation but we have to have more lenient policies to transform casinos into integrated resorts.”