No company is an island

The Cha family is recognised for developing a signature variation on Hong Kong living. Now it's ramping up other business interests 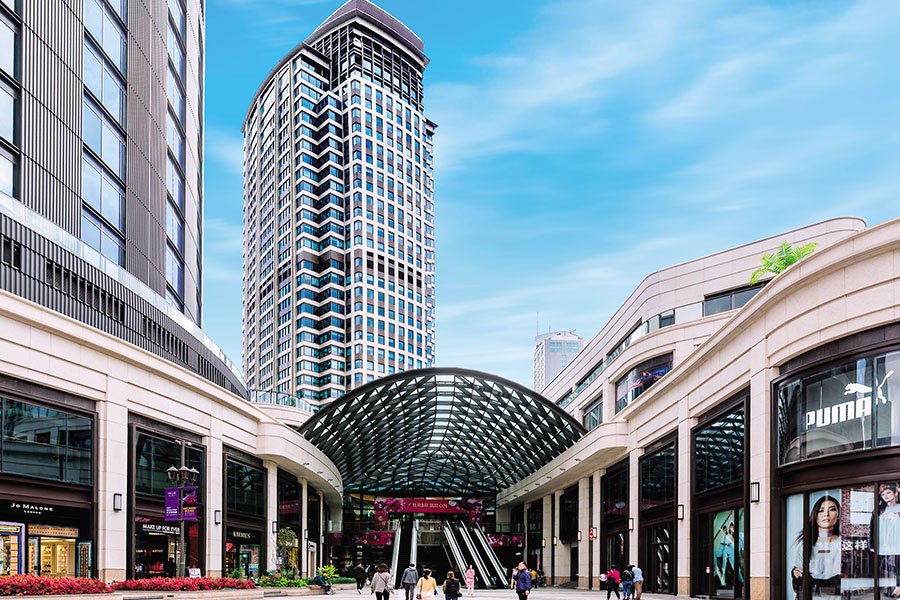 Taikoo Hui offers the gamut of hip-luxury brands, the commercial glitz contrasting with the sole relic, a meticulously restored century-old mansion used to commemorate long-ago textile merchants. With memorabilia on view inside, it represents a homecoming of sorts for Cha Chi-ming, who, after his dyeing factory was destroyed by bombs in the run-up to World War II, remade his fortune from Africa to Hong Kong.

It is in Hong Kong where his sons run the far-flung enterprises of HKRI (Hong Kong Resort International). That’s also where the elder Cha, who died in 2007 at age 93, was known for both his political influence and his signature development: Discovery Bay.

Cha rebuilt his textile business in unusual fashion, but in its subsequent development mode his clan has had another distinction in Hong Kong. In a city renowned for its hypercharged and showy can-do spirit, the low-key Chas have been happy to move at a snail’s pace. 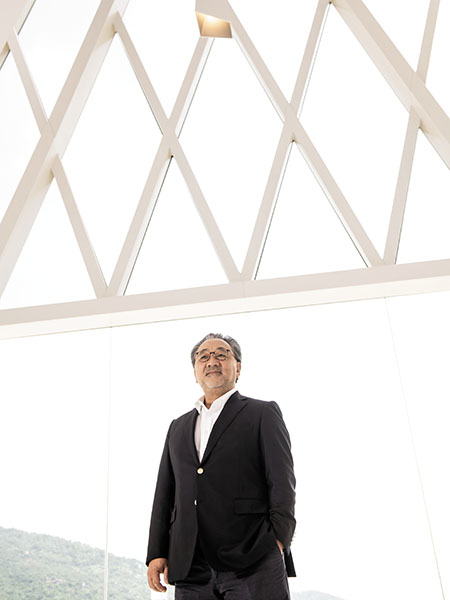 “We will make a big splash”: Victor Cha in the White Chapel, part of HKRI’s flagship development Discovery Bay
Image: Lucas Schifres for Forbes
“We have heard the criticism,” concedes Victor Cha, 69, deputy chairman of HKRI, when we meet at Taikoo Hui. “Even our shareholders have expressed some concern, but we just prefer to operate at our pace, with slow but steady growth.” And who can question the results? Forbes Asia estimates the family’s wealth at $2.6 billion. Yet that pace may be picking up, as the hubbub around him suggests.

The soft-spoken Cha details the history of China Dyeing Works, founded by his father 70 years ago. But the roots go back further, to Zhejiang Province, where Cha Chi-ming was born. He worked at his in-law’s Changzhou Dacheng Textile & Dyeing until constant raids in the Sino-Japanese War forced him to evacuate the plant, along with 100 looms, to Chong­qing and later move to Hong Kong.

Fast forward to the splendid Shanghai of 2018: HKRI spent a decade and a half developing this $2.48 billion mall in a prime Jing’an site. Moving the restored Cha House (actually that of another dye family) and relocating all the residents took time. Hence, by the time Taikoo Hui opened last year, the 50-50 partner, Swire Properties, had already completed two similar mixed-use developments in China launched after this one. With Swire now identified with its San Li Tun in Beijing and Taikoo Li in Chengdu, many think Taikoo Hui is another of its solo projects. Not that HKRI minds.

“We are quite happy to operate out of the spotlight,” says Victor Cha. “That has always been our style.” But back home the Cha name is inescapably associated with Discovery Bay. For decades, Hong Kong’s largest privately planned community has been the cash cow and driver of the company (see sidebar). It has given HKRI, with revenue exceeding $284 million in the year ending in March, and the Chas the foundation for entering a new phase of expansion. And, perhaps, recognition.

“We are going to make a big splash, no doubt,” vows Victor, who runs the firm with his older brother, CEO Payson Cha. He is referring to HKRI’s next project, another homecoming, in Bangkok. He shares plans for a lavish waterfront hotel on a 400-metre stretch of Bangkok’s Chao Phraya river designed by star­chitect Bill Bensley. “It will be small, maybe 200 units in the hotel,” Cha says. But behind will rise thickets of towers, perhaps 1,500-2,000 residences.

“We’re still juggling the total number, so that’s not cast in concrete,” Cha notes cautiously. Bangkok’s River of Kings is in the midst of a building boom, with a slew of five-star properties on the way from Four Seasons, Capella, Langham and Six Senses. Still, this would be one of the biggest projects in Thailand, putting HKRI back on Bangkok maps. Again. 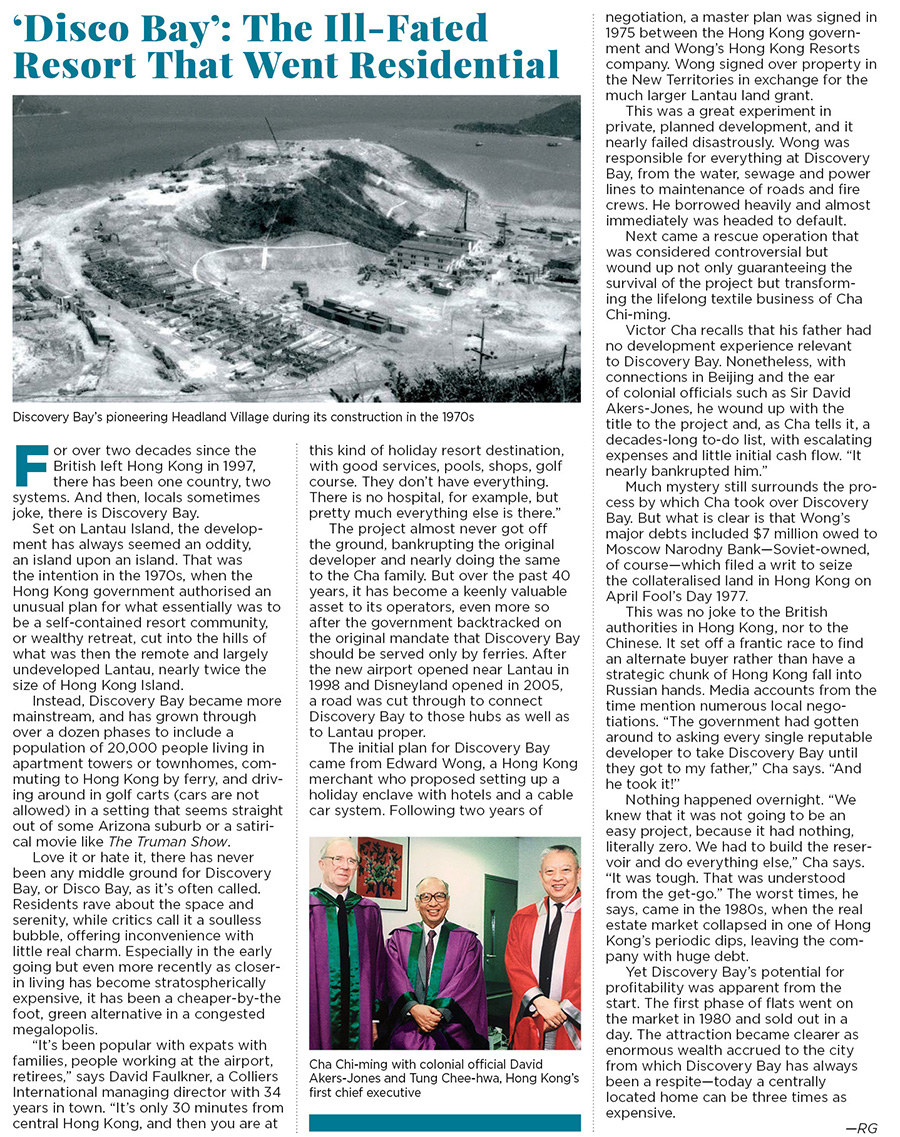 One of central Bangkok’s most beloved properties is the Sukhothai Hotel, whose Thai design is widely credited with redefining boutique hotels in Thailand and across Southeast Asia. In an era where grandeur was measured in massive marble lobbies and chandeliers, the Sukhothai took a different tack, with traditional Thai wooden buildings set on flower-filled ponds, kitted out with Thai art and artifacts. Even today, few Thais know that this local landmark was actually built by Hong Kong’s HKRI.

“The Sukhothai really defined luxury in Bangkok,” says Bill Barnett, managing director of Asia consultancy C9 Hotelworks. “It is still considered one of the top hotels in Bangkok.” Leveraging that success clearly hasn’t been a pressing priority for HKRI. The new Sukhothai Grand on the river would become just the third Sukhothai in nearly three decades. The original debuted in Bangkok in 1991. The second opened in Taikoo Hui this year, 27 years after the original.

Look for the rollout to pick up speed. “We have several other projects in discussion, for different cities in China,” says Cha. Why now, after so many years? “Hotels really don’t make money,” he explains.   At least, not as much as real estate, and therein lies an explanation for a seeming change of course.

“They had seemed to be ­retreating from hotels,” says Robert Hecker, managing director of the Singapore office of hospitality consulting firm Horwath HTL. “They sold the Sentosa [Resort & Spa] in Singapore and everything else overseas” except Sukhothai. In the 1990s, HKRI claimed two small hotel brands, Beaufort and Rafael, with properties in Asia, Europe and the US. For a time, HKRI planned to expand, but with the father ageing and the sons taking hold, the family eventually disposed of the inns. “We’re real estate developers,” Cha says, and there was a continued build-out at Discovery Bay to manage as well as other Asian projects. (The Chas still have a small textile operation, but the China Dyeing Works building in Tsuen Wan has become a commercial complex comprising a shopping mall and office tower.)

Today the Sukhothai name has additional currency as the real estate market centres on upscale properties. Barnett notes that mixed-use developments nowadays are often anchored by a name-brand hotel. “All the big projects mix residential towers with luxury hotels. They get a premium, maybe a 30 percent boost in the price if they add a luxury hotel.”

Actually, that was how it worked with the original Sukhothai in Bangkok, which was designed by an all-star team including Asian hotel guru Adrian Zecha, founder of Aman Resorts. HKRI developed the hotel and, equally important, adjoining residences, which sold briskly to Hong Kong buyers. Cha says HKRI is also planning to add a second phase of residences at the first Sukhothai and has other projects in mind for the sizeable Bangkok land bank they have assembled—quietly, of course. “The time is right,” he says. 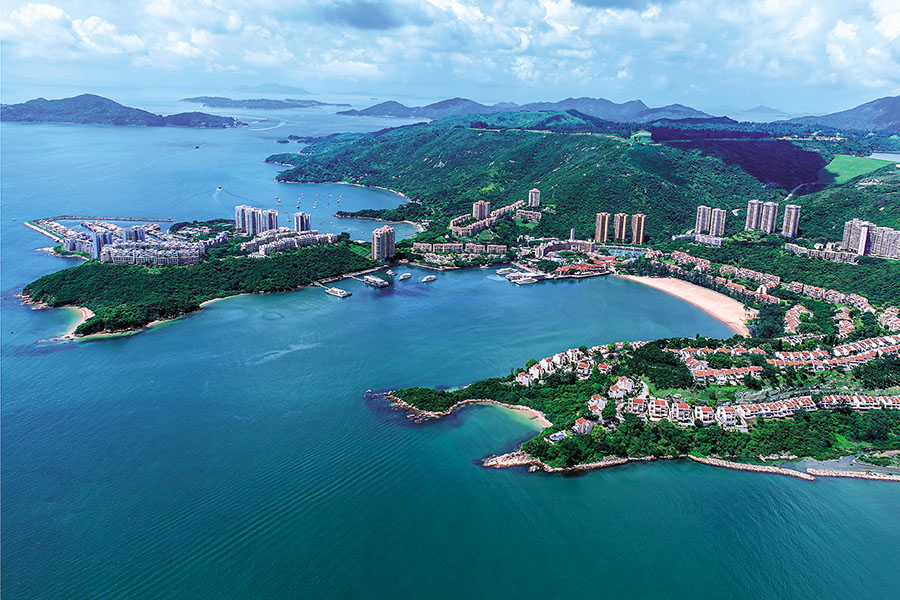 Discovery Bay now has some 20,000 residents (no cars allowed, just golf carts)—and ferry isn’t the only way in
Image: Lucas Schifres for Forbes
Timing has figured in the Cha clan’s opportunistic rise before. As Cha Chi-ming had re-established the textile business in Hong Kong, rivals there were gradually moving production to China. He took a different approach, expanding to Africa. Cha House in Shanghai shows pictures of him being feted in Africa, where he opened 14 factories in Nigeria, Ghana and Togo. His workforce numbered 25,000, and Victor Cha says he laid claim to be the largest employer in sub-Saharan Africa.

Victor wound up liquidating most of the family textile business soon after returning to Hong Kong in 1985, following his studies at Stanford and years working in venture capital in Silicon Valley. By then his father had already staked the family’s fortune, and future, on Discovery Bay, and all available cash was needed to develop that 6.5-square-kilometre site.

Official hearings later looked into the decision to grant development rights to the elder Cha, which was spearheaded by David Akers-Jones, secretary for the new territories and a proponent of developing new towns in Hong Kong. No wrongdoing was determined. A lifelong Hong Kong civil servant, Akers-Jones later joined the board of Mingly Corp, a development company controlled by the Chas.

Cha Chi-ming may have had to depart the earlier textile business on the mainland, but in his later years he also enjoyed strong connections to Beijing and helped draft the Basic Law governing Hong Kong after its return to China. He worked on other advisory committees and in 1997 became one of the first to win the Grand Bauhinia medal, Hong Kong’s highest honour. Pictures at the Cha house show him in meetings with many Chinese officials, but in keeping with the family’s modest approach to publicity, he was rarely seen at Hong Kong society events. Chief Executive Donald Tsang spoke at his funeral, where pallbearers included tycoons like Li Ka-shing and officials from Hong Kong, China and Africa.

Since his death, Payson, the oldest of three sons, and Victor have worked to diversify HKRI. As Discovery Bay ­reaches a mature buildout—still with occasional controversies—they have pursued the other developments in Asia (as well as the US.) while expanding into health ­services in Greater China and the Philippines.  With most projects, like in Taikoo Hui, they seek out partners, not only for expertise but also to mitigate risk.

Hedging bets is simply smart business, says Victor Cha, especially with the volatility of exchange rates and global crashes. That’s also a reason for the expanding and ranging portfolio itself.

But little else has changed for this turtle-like company from Hong Kong. “We’re going to continue on this same path,” he promises, “with steady development.” Just a bit more of it.

Tweets by @forbesindia
Lotte's bet: Joker in the deck
Yes Bank finds a successor but will it succeed?