Mapbox: In the right direction

Developers love Mapbox's customisable, plug-and-play maps. Now the startup needs to figure out how to compete with Google in the race to steer self-driving cars 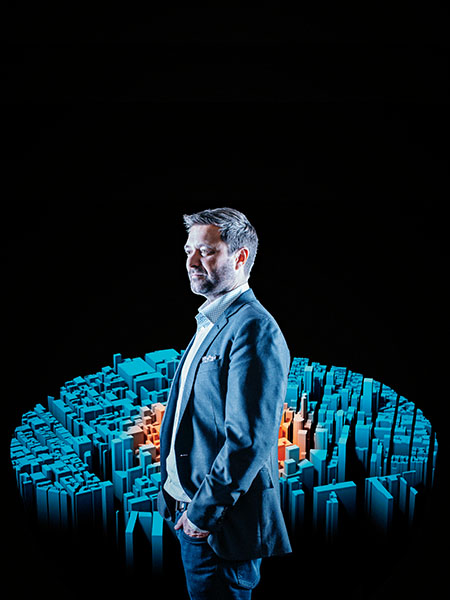 CEO Eric Gundersen with a Mapbox rendering of San Francisco. His company is ramping up quickly, adding 69 employees in just the last quarter
Image: Timothy Archibald for Forbes

Eric Gundersen sipped tea and haggled for maps as he sat in the basement of a government office in Kabul. A tattooed, fast-talking American, Gundersen was running an 18-person international development consulting company when he was commissioned by the US State Department to plot problem areas in the country in the aftermath of Afghanistan’s 2009 presidential election.

Gundersen, now 38, needed to visualise data trapped in thousands of PDFs of voter records. But in 2009, as Google Street View cars were snapping photos of cities around the globe, views of Kabul were still largely blank. “It’s almost like trying to think about the world before Wikipedia,” he says. So Gundersen and his team mashed up their own maps using Mapbox, a tool they had started to build a year before.

Nine years later, more than 350 million people touch a Mapbox visualisation every month. The company provides maps for Snapchat, the Weather Channel and the fitness app Strava. It powers ETAs for
grocery-delivery app Instacart and works with Tesla, Lyft and Uber.

Investors have put $230 million into the company, at a valuation of around $700 million. Mapbox is on track to generate an estimated $100 million in revenue this year, but no profits. One problem: Only 3 percent of Mapbox users pay for it. The company hopes to achieve profitability by building out mapping services for self-driving cars and augmented reality. But that means competing with Google. Mapbox is more customisable than Google Maps, but it’s an open question whether such advantages will be enough to overcome the search giant’s deep pool of engineering talent and even deeper pockets.

Mapbox has gotten this far by focusing strictly on the developers, creating a basic building block, à la Stripe or Amazon Web Services, that a wide variety of businesses can use. While many mapping companies give users a finished map, Mapbox is akin to a box of Legos that engineers can customise. It’s easy to change the fonts and the colour scheme and add features like turn-by-turn directions and terrain information. Foursquare became Mapbox’s first major customer in 2012, ditching Google Maps for the less expensive alternative.

The service is free to start but still not cheap to scale. For extensive enterprise use, the average annual contract starts at around $40,000 and can reach into the millions, like its $5 million contract with Tesla. The “freemium” model has some hidden advantages. Developers have usually been playing with Mapbox for months before Gun­der­sen ever walks into a meeting to close a sale.

More than 350 million people touch a Mapbox visualisation every month. But only 3 percent of users pay for it

Mapbox doesn’t need to send out pricey cars or satellites in space to map the world. “Map data is not like food, air, water that’s just around. It takes active work to make it,” says Young Hahn, Mapbox’s CTO. Whenever someone opens a Mapbox map, that person’s phone or computer sends three ­pieces of anonymous data back to the company: Longitude, latitude and a time stamp. These billions of data points constantly improve Mapbox’s real-time plug-and-play map of the world. “Every time you touch the map, the map is learning,” Gundersen says. “It’s that flywheel.”

When Gundersen left Afghanistan in 2009, he ran Mapbox as a small project within his consulting company for several years. The consulting business subsidised Mapbox for a while, but after almost missing payroll in 2010 and raking up nearly $250,000 in personal debt, Gundersen started looking for backers. He secured a $10 million funding round in October 2013.

Today more than 1.1 million engineers have registered to use Mapbox’s software, and the service has buy-in from developers like Jody Kelman, a self-driving-car product manager for Lyft, which uses Mapbox’s maps to show passengers in its autonomous cars what the vehicle is seeing on the road. “Making tools that engineers like to use is a really impressive feat,” she says.

Gundersen’s next challenge is to turn that technical praise into more paying customers. That won’t be easy, but the potential payout is enormous. “If we get this right,” he says, “we’ll be inside everything.”