Matt O'Hayer knew how to farm a better egg - he'd done it as a kid. The real trick for his company, Vital Farms, was getting consumers to pay for them and finding investors to finance him 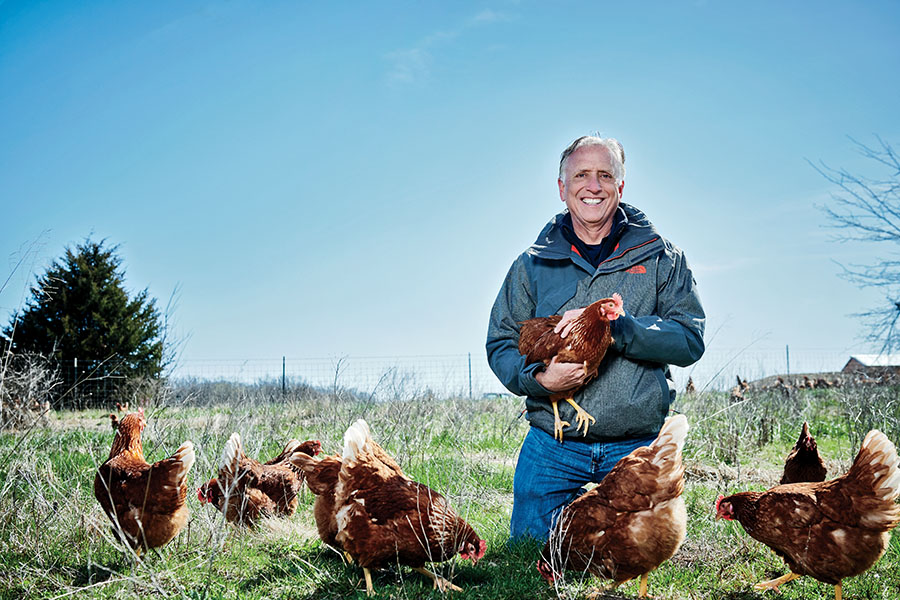 “Without profits,” Matt O’Hayer says, “the company [Vital Farms] will die. But it’s not what we wake up in the morning thinking about.”
Image: Jamel Toppin for Forbes
On a sunny afternoon at a 25-acre family farm near Paris, Texas, Matt O’Hayer is crouching in the mud to play with the hens. As he pets one, dozens swarm around him, clucking and cooing. He coos right back. “Hey, girl,” he whispers. “Good girl.” O’Hayer, the 62-year-old founder of Vital Farms, is checking in on one of the independent farms in his network of 120 that produce eggs to Vital’s exacting specifications.

Moving inside the farm’s chicken barn, O’Hayer meets thousands more hens, each of which lays an egg every 28 hours inside her own private nesting box. A conveyor belt runs underneath the boxes to catch the eggs, and as O’Hayer points out proudly, there’s a dark curtain in front of each box: “Girls like their privacy,” he says. At Vital Farms, both the chickens and their farmers are treated differently. “People say chickens don’t eat grass,” laughs O’Hayer, clad in red flannel and jeans. “I’ve heard that for years. Whole Foods used to tell me that. They love it.”

Early on, O’Hayer lured farmers by telling them they would earn 35 percent more than conventional egg farmers while raising about 75 percent fewer hens. “We’re not going to nickel-and-dime them,” O’Hayer says. “We want to build a relationship.” To­day he routinely turns down farmers who want to join his network, many because they live outside a swath of land that stretches from northern Texas to Missouri and east to Georgia where livestock can be raised in grass year-round.

After the farmers collect the eggs, Vital Farms packs them into black cartons with a chalkboard typeface. Each comes with a copy of Vital Times, a tiny newsletter that features a bird of the month and is topped with quirky headlines like ‘Our Girls Get the Munchies!’ The marketing and a creative financing scheme have allowed O’Hayer to carve out a niche in the more than $5 billion egg industry. When O’Hayer started in 2007, he committed to producing “pasture-raised” eggs—the accepted standard being 108 feet of outdoor space per hen (conventional eggs come from hens crammed into tiny cages; ‘cage-free’ just means there are no cages; ‘free-range’ can mean up to 20 square feet per hen). It was one of many decisions he made knowing it would likely limit his company’s growth. Back then, pasture-raised eggs represented less than 0.1 percent of the market. Now it’s 2.7 percent, and O’Hayer’s Austin-based Vital Farms has about 73 percent of that. The company, which employs 110, hit sales of $100 million last year, up nearly a third from 2016. It has grown beyond Whole Foods and figured out how to get mainstream consumers—in chains like Amazon Fresh, Kroger, Walmart and Target—to pay artisanal prices, as much as $8 a dozen (more than four times as much as the cheapest carton at Walmart). “It’s much larger than any of us imagined,” says Whole Foods president AC Gallo.

Growing up in Rhode Island, O’Hayer used to hear his uncle talk about paying his way through college by selling eggs door-to-door. Just before his 13th birthday in 1968, O’Hayer started his own egg business. And then, when it was time to go to college, he decided to try entrepreneurship instead, launching a series of ventures that he hoped would take off. He moved to Houston to open a company that cleaned buildings, selling it in 1980 for a few hundred thousand dollars. With the cash, he bought a farm and raised hens for three years before selling the acres to fund a company that helped small business owners save money by bartering services with each other.

Next, in 1995, he started a discount travel company, Grand Adventures Tour & Travel Publishing, for airline employees, who often need to book hotel rooms at the last minute. It went public in 1998 and hit $50 million in revenue. But then, during a Manhattan fundraising trip in 2001, O’Hayer watched the World Trade Center fall—and then saw booking cancellations start rolling in. The next month he sold the company in a friendly foreclosure that left him with one takeaway: “Always be over-capitalised.” He spent the next five years living on a catamaran where he and his girlfriend, now wife, sold vacation charters.
In 2007, they moved to Austin—home of John Mackey, O’Hayer’s good friend and the founder of Whole Foods. During a scuba-diving trip to Indonesia with Whole Foods executives the following year, O’Hayer says he heard a lot about raising food humanely. Recalling how much better the eggs had tasted when his hens were fed grass, he decided to take another shot at the business. He purchased 20 Rhode Island Red hens and a 27-acre plot of land in Austin and started selling the eggs to local restaurants and farmers’ markets. He wound up donating most of the eggs to a food bank because few people would pay the price he demanded. “I wasn’t ready to sell them cheap,” says O’Hayer, who delivered the eggs from a 2005 Subaru he still drives. “I wanted to establish what they really would cost long-term.” In 2008, Whole Foods started selling his eggs in the Midwest. “They took a big risk putting us on the shelf,” he says. “They’ve championed it in their stores and created a category.”

O’Hayer had the good fortune to launch Vital Farms as consumer awareness of agricultural practices was turning into a movement. As sales increased, O’Hayer concluded he would do better by marketing eggs than farming them, and he started building his network of farmers. “There are only a few grocery chains in the country that don’t sell pasture-raised at this point,” he says. After a 2013 flood destroyed O’Hayer’s Austin farm, he focussed on marketing, eventually selling the land. The marketing initiatives included hiring a veteran wildlife videographer as director of brand, staging exclusive dinners with social media influencers and creating campaigns like a 2017 YouTube series on ‘Bullsh*t Free Eggs’ (viewed 2.4 million times) and ‘Bullsh*t Free Kitchens’ (viewed 7.1 million times).The main goal, says O’Hayer, is to connect with millennials: “That’s where the growth is, in any category.”

Vital Farms’ growth has been fuelled by $25 million in private equity O’Hayer has raised, most recently at a company valuation of $136 million, as estimated by Pitchbook. Much of the capital has gone toward buying trucks—and more Subarus—and building a $17 million washing-and-packing facility in Missouri that is known at Vital Farms as Egg Central Station.
The financing scheme O’Hayer employed has given him the best of both worlds, allowing him to raise the capital he needed to grow while maintaining control of his business. He did this by picking the right investors and offering them regular liquidity events to sell some shares.
None of his six private equity investors, O’Hayer says, are in it for a quick profit. They are willing to wait for their returns, and they had no objection when he registered the company as both a B corporation and a benefit corporation—both of which require companies to pursue priorities, such as environmental sustainability, that can limit profits and valuations. “You don’t have to sell to the highest bidder,” says O’Hayer. The liquidity events insulate O’Hayer, who remains the company’s largest shareholder, from potential interference and the pressure to sell by giving investors the opportunity to sell some shares as the value of the stock increases with funding rounds. “The idea of offering liquidity to existing shareholders came from wanting to build a socially-conscious business that would endure, not simply a get-in-and-get-out format. That required me to give our shareholders options to sell all or part of their shares without pressuring for a sale of the enterprise,” O’Hayer says. So far, none have sold out.

Even now, Vital Farms ships 5 million eggs a week, it continues to try to reduce costs to attract more conventional consumers. Egg Central Station, for example, which trucks eggs nearly every day from its network of farmers, all within a day’s drive, will help Vital Farms cut its prices 20 cents a carton. The company has also held down prices by selling a line of eggs that are not certified organic—the hens are raised in organic, pesticide-free pastures, but their feed is supplemented with GMO corn.

Pricing and organic certification have loomed larger as Vital Farms has attracted competitors. One is Handsome Brook Farms, which sells organic, pasture-raised eggs. Founded in upstate New York the same year as Vital Farms, Handsome Brook produces an estimated $18 million in revenue annually while selling in some 4,000 supermarkets, including Kroger and Publix.
Most Handsome Brook eggs are organic, and one of its investors, Gary Hirshberg, suggests that Vital Farms’ branding may mislead customers. “Vital Farms will have to do more in organic,” says Hirshberg, co-founder of Stonyfield Organic, the yoghurt business now owned by Lactalis.

“We are extremely careful to be as clear as possible,” O’Hayer responds. “If we were allowed to say ‘not organic’ on the label, we would.” He adds that Vital Farms is growing its organic line. “We started out as 100 percent organic,” he says, “but as we grew, we realised that to reach more lower-income and price-conscious consumers, we’d have to take some cost out. The market has proven this to be the right decision.”

O’Hayer says sales were up 47 percent in the first quarter. He has plans to expand the sale of butter from pasture-raised cows, and he grins at the thought that Vital Farms has already exceeded his expectations. “When I stopped looking for the payoff, the big bucks,” he says, “that’s when I had the biggest success I’ve ever had.”

Tweets by @forbes_india
The nature of fashion
Missouri Star Quilt Co: The Disneyland of quilting