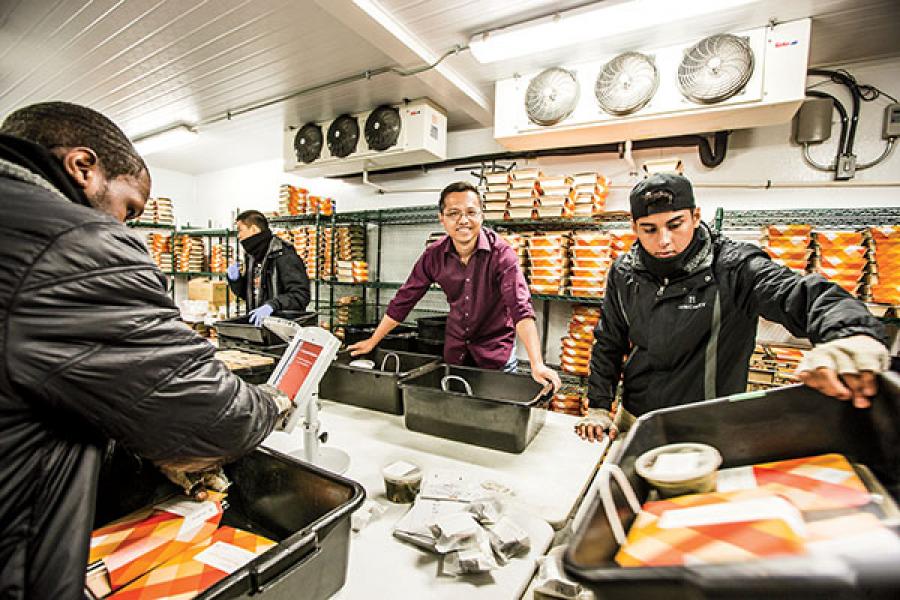 Image: Eric Millette for Forbes
The chill’s the thrill: Tri Tran is taking the middle road between delivering it raw and rushing it over to you hot

Munchery’s plan to take over your dinner table starts every weekday at 5 am, when the first chefs start chopping heirloom tomatoes and braising pork in the startup’s industrial kitchen in San Francisco’s Outer Mission area.

By 1 pm, the frenzy shifts to assembly lines where workers hand-pack compostable trays of couscous, chicken legs and greens. Stacks of meals pile up inside a vast refriger- ated room, where the operations team—in fleece and hats—sorts meals into bags and hands them off to runners, who weave past one another and dash out to their cars. By 4 pm, trucks full of refrigerated meals pull into parking lots in places like Rockridge and Burlingame, where they’re met by more drivers who pick up the evening’s goods in unmarked duffel bags and fan out on door-to-door routes guided by an app. “Few words are exchanged—it looks like a drug deal,” says Tri Tran, Munchery’s co-founder and CEO.

Overseeing the meals’ whole life cycle is Tran, a father of two who founded Munchery in 2010 with Conrad Chu because both were looking for an answer to “What’s for dinner?” for their families. On the battlefield of food-tech startups, Munchery ($180 million valuation, according to Forbes) is among the best funded and is the longest-standing, but rivals such as Sprig, SpoonRocket and Blue Apron are ready to eat it if it gets in the way.

At 39, dressing in modest button-up shirts and sporting oval Transitions lenses, Tran projects a different image from most founders on their first startup. When Munchery was raising $28 million in funding in April, Tran pitched investors his childhood, not his company. He escaped from Vietnam by boat at the age of 11 with his grandmother and older brother, ended up in San Jose with his aunt and uncle, and didn’t see his parents again until he graduated from MIT. After that, he said to potential investors, a startup didn’t seem so hard.

Shervin Pishevar, the venture capitalist who bet on Uber when it was just a scrappy black-car service, was sold on Munchery—and on Tran—to the tune of $25 million from his new fund, SherpaVentures, its biggest investment yet. Pishevar says he’s drawn to Tran’s “quiet leadership”. “If he sat in a meeting, you wouldn’t realise he’s the CEO,” says Pishevar, who tears up when he talks about Tran’s childhood. “The world needs to see someone like Tri build a multibillion-dollar company.” It may get there, but Munchery’s early days were not so promising. It launched as a network of chefs cooking meals in their own kitchens and selling them on Munchery’s website. Tran had to beg them to make extra meals and managed to move only about 50 or 100 a day. At the time, meals were $25 and Tran did the deliveries himself, hoping to find out who was crazy enough to pay that premium. (Turns out that among them were a lot of curious investors, some of whom ended up backing Tran.) As the company grew, the partner-chef model didn’t scale well. “When I started, they were experiencing a lot of growing pains—getting tonnes of orders—and weren’t prepared for it,” said Diane Davidson, who worked as an independent contractor chef for most of 2013 before leaving to become a personal chef because she found Munchery’s volume too labour-intensive.

Last year, Munchery started hiring full-time chefs and moving more of the process under one roof. Seven chefs in its main San Francisco kitchen now make a majority of the dishes each day. Tran says the move cut his food costs and gave him more control over quality and variety.

Rival food-on-demand startups differ in their approach to delivery. Sprig and SpoonRocket aim to zoom a hot meal, ready to eat, to your door in 20 minutes or less. Blue Apron and Plated sell dinner-kit subscriptions—several meals’ worth of ingredients shipped to your door ahead of time—and let users cook for themselves. Munchery placed its bet on the middle ground: Its meals are cooked, plated and chilled before being delivered during dinner time to be re-heated in homes or oﬃces. Shipping food cold for later re-heating simplifes logistics at each turn, and the food maintains better texture and quality. And cold food is exempt from California sales taxes, roughly a nine percent savings.

All of Munchery’s delivery workers are hired as employees, and drivers make $11 an hour plus 56 cents a mile if they use their own cars. If they work more than 30 hours a week, they get health insurance and other benefits. Sprig’s delivery workers were employees, too—until August, when the company says it was advised by its legal team that the workers were misclassified. Now they’re paid per delivery with a guaranteed hourly minimum. Tran suspects Sprig made the decision based on costs, and admits that his moral stance might not make financial sense forever.

But for now, all talk is of growth. Munchery launched in Seattle in July, with New York City, Los Angeles and Washington, DC, next. There’s a new kitchen planned for South San Francisco that Pishevar says can handle 25,000 orders per day, up from an 8,000 limit now. Well-funded rivals might be nipping at its heels, but Tran dismisses them. On hot food: “How long has that been sitting in a car?” And on dinner kits: “Three meals means a 20-pound box with packaging up the wazoo.” To him dinner is still a dish best served cold.