Pizza Studio set to disrupt the US fast food industry

Sometimes even the most saturated industries are ripe for disruption. Especially when a nuclear submarine commander focuses on the ultimate comfort food 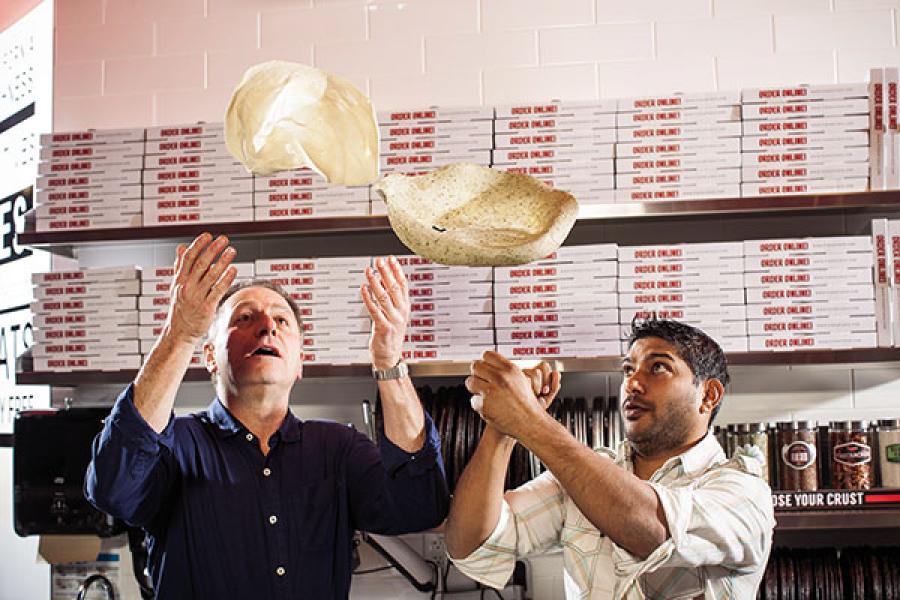 Who is crazy enough to start yet another pizza chain? Especially after ambitious chefs have piled on every conceivable topping (peanut butter and jelly, kangaroo meat), injected cheese into every last nook and cranny of dough and committed unholy cross-branding (Pizza Hut’s Doritos crust)? Samit Varma, 38, and Ron Biskin, 62—that’s who.

The odd-couple co-founders and co-CEOs of Pizza Studio of Calabasas, California, have brought together Varma’s experience in the military and startup world and Biskin’s long history in fast-casual restaurants to create something fresh. They’re adapting the quick and made-to-order model, championed by Chipotle and Subway, to pizza. “It’s all about execution,” Varma says.

Americans spend nearly $39 billion a year on pizza, whose origins go back to the ancient Greeks (the recognisable pie dates from 18th-century Italy). Two-thirds of every dollar gets spent at the likes of Pizza Hut, Domino’s and other fast-casual joints. But those giants are relatively slow—half-an-hour can elapse between order and service to table or home—and they sure don’t offer full custom construction.

Pizza Studio takes a different tack and netted an estimated $1.2 million on $11.5 million in revenue in 2014 while growing to nearly 25 locations. That’s up from $2.5 million in sales in 2013, its second year, when its franchise count was in single digits. “We didn’t start this to have a couple of pizzerias,” Varma says. “We’re going big.”

Customers choose from different flavoured crusts, several types of sauces, an assortment of cheeses and 25 toppings. The assembled pie moves on a conveyor belt through a convection oven that exhales 50 mph gusts of high heat and emerges two minutes later crisp and bubbling.

Varma and Biskin run a tight ship. Employees have been known to use rulers to check the size of onion slices. Everyone can recite the acronym Snap (Sense of urgency, No excuses, Attention to detail, Pride of ownership). Hokey, but it instills an attitude that’s essential to growth. Uniformity and cleanliness keep customers coming back, and teamwork keeps the crew in line—and, in some cases, well incented. “We have stock option plans for everyone at corporate,” Varma says.

Pizza Studio’s ﬁxation on eﬃciency stems in part from the eight years Varma spent as a naval oﬃcer on nuclear submarines after graduating from Annapolis in the US in 1998. No, running a pizza franchise isn’t quite like commanding the USS Pennsylvania—but that training has been “crucial in developing the company as we scaled from three employees to 704,” Varma says. Also helpful: His MBA from USC and his tour of duty managing overseas manufacturing for audio-tech startup Audyssey Labs.

Varma’s work at Audyssey got the attention of Anthem Venture Partners, which nabbed him in 2008. There he helped develop startups, including data ﬁrm Siperian, bought by Informatica; ampliﬁer developer Wavestream, acquired by Gilat; and Viewdle, a facial-recognition outﬁt snapped up by Google: “It taught me how to build a company from PowerPoint to IPO.”

Biskin has travelled a different path. Trained as a lawyer, he joined TGI Fridays in the early 1980s and helped expand the chain for six years before a move to Grand Metropolitan, now known as Diageo, to oversee Burger King. From there, he hopped to a California-based franchise company, Sydran Group, where he experienced “those particular headaches that lie in being a franchise operator”.

He then headed development for Baja Fresh eateries and managed franchise growth after Wendy’s bought the chain. Three years later, he was running Wolfgang Puck’s casual dining division, which, he says, taught him some basics of hospitality: “We welcome every guest, and we thank them when they leave.”

By 2010, Varma had conjured the idea for Pizza Studio, inspired by his childhood. “My mom would make a big dough ball, and we’d roll them out with pins and make fun pizzas,” he recalls. But he needed someone with industry experience. The next year a mutual friend introduced him to Biskin, who, after ﬁve years with Puck, sat on the board of Native Foods Café.

The two sank $500,000 of their own into a test studio in a Los Angeles warehouse. Over 16 months, Varma says, “we set up the assembly line in different ways”. They held noshfests with the public and culinary experts, who loved the variety of flavoured crusts (whole grain and faxseed, rosemary herb and more).

Launching the ﬁrst store, a 1,600 sq ft unit near USC, was hard—but expanding was harder. No one wanted to lease space to a startup. Finally, Varma and Biskin invited real estate powerhouse Brookﬁeld to their test kitchen. “They brought about six executives and were blown away,” Varma says. “They signed the lease with us within two weeks.”

Then there was the problem of suppliers, who ignored pleas from a one-store operation bent on world domination. So the duo hopped on planes and made personal calls, as well as “big forward commitments” (which they decline to quantify). Now, Varma says, “suppliers are coming to see us to win our business”.

Midway through 2013, Pizza Studio exceeded its sales target by 60 percent. Franchisees began to bite (they now operate 18 of the 24 stores, paying 5.5 percent of sales to the home oﬃce). A big coup: Hiring away Panera Bread franchise oﬃcer Hank Simpson, after a month-long courtship, to run the day-to-day business.

While Biskin and Varma control the company, Pizza Studio has attracted backers—$2.5 million from an Austin, Texas, investor and $4 million from Monogram Capital Partners. “The return on investment you can get on a Pizza Studio is much higher than for competitors,” says Monogram managing partner Oliver Nordlinger.

Varma and Biskin expect to ﬁnish 2015 with close to 100 locations. Hustle is everything—they can feel the oven-hot breath of upstarts Pieology (42 locations, with many more in development) and Blaze Pizza (45 stores and growing). Can Domino’s and Pizza Hut be far behind?

Tweets by @forbesindia
Indian employees likely to see a 11.3 percent wage hike this year
Why management quality should matter for investors