Has any dad embarrassed his daughter more than Cecil Chao? No matter. He and Gigi make a tight-knit team at their Hong Kong property developer, Cheuk Nang Holdings 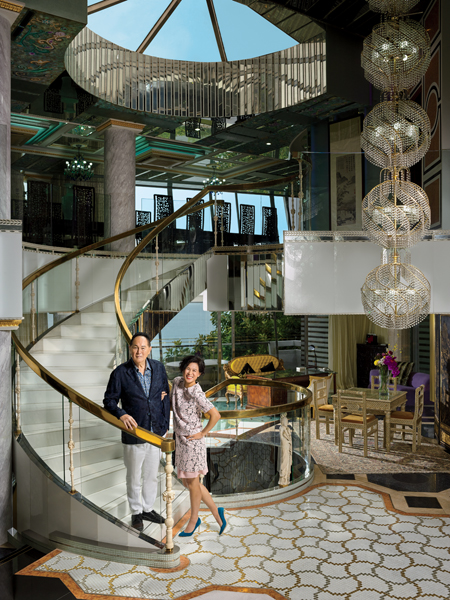 It’s a Monday afternoon, and property tycoon Cecil Chao and his daughter, Gigi, are poring over architectural plans in their 49th-floor headquarters in Hong Kong’s Central Plaza, their backs to sweeping views of Victoria Harbour. The chairman and vice chairman of Cheuk Nang Holdings are busy with an array of big residential and commercial projects in mainland China, Hong Kong, Macau and Malaysia.

Their professional relationship belies a lot of history. Generating headlines worldwide, Cecil offered $65 million four years ago to any man who could woo his daughter into marriage, though she was already married to a female partner. Some 10,000 men responded. Headlines flared again in early 2014 when he doubled the offer and Gigi countered with a public letter to Cecil asking for acceptance and respect.

Looking back, Cecil, 80, explains that he made the offer to give his daughter male options, believing that she had struggled to find acceptable boyfriends. After Gigi, 37, spurned the idea, he accepted her decision. “It’s her life,” he concedes. “She decides about her private life.”

For her part, Gigi, a practicing Christian, clearly loves and respects her father, believing that his inten- tions stemmed from love, not malice. “It’s been tragic and comic,” she says, “to have something so private in the open and to become a laughing stock of dinner conversations.” She says the saga helped her develop “humility, patience and character” and increased her capacity to forgive.

Still, she is weary of discussing the subject, which even now generates unwanted emails. “I’m tired of the random notices from men trying to seduce me,” she says. “It has become an engine of online fraud, with impersonators of me or my father going after these men for ‘emergency money’ while stranded abroad, or in some ‘lucrative’ deal.”

While most father-daughter bonds would likely snap under such glaring pressure, the Chaos’s has not. In Octo- ber 2014, Cecil named Gigi, the oldest of his three children and a fellow architect, the heir to the company.

In the new Cheuk Nang headquarters—the company sold nearby Cheuk Nang Plaza last year for just over $100 million—father and daughter are in constant communication. Cecil, dressed in a white short-sleeved shirt with a gold iPhone in the front pocket, is positioned at the far end of his palatial office. There’s a trading terminal for his private investments as well as Chinese and European classical artwork and antiques, including his mother’s inlaid Italian marble table and six blue upholstered chairs.

Just outside, between Cecil’s secretary and the three-person design team, Gigi stands at a high desk wedged into an open space. Her black vest sports the insignia of Faith in Love, a foundation she started in 2008 to help economically struggling youth and elderly. Hanging on the wall are colourful contemporary prints as well as her appointment to the Hong Kong Air Cadet Corps. Books, binders and stacks of documents are within easy reach while course notes for a law degree she’s pursuing are taped on the window, slightly obscuring the view.

The different work spaces highlight their contrasting personas. Cecil remains firmly at the company’s helm, with no intention of retiring soon. A self-proclaimed playboy, he’s Eastern-minded, paternalistic, boastful, atheistic. He’s never married: His children are from three different women, and he proudly claims to have “dated” some 10,000 others—so far.

Gigi feels Western-minded and speaks with an American accent acquired after moving to New Jersey at the age of 6 with her stepfather and mother, former Hong Kong movie actress Kelly Yao Wei. She’s an active Anglican, committed to helping others, deferential to her father, soft-spoken, humble—and happily married to her wife, Sean Eav, since 2012. “At a young age I became a Christian,” she says, relating how she received a spiritual calling that prompted her to study Buddhism and Christianity from the age of 12. At the University of Manchester in the UK, she volunteered for World Vision, a global Christian organisation, in Malawi. “I’m a liberal Christian, being gay. I grew up in a complicated environment.” 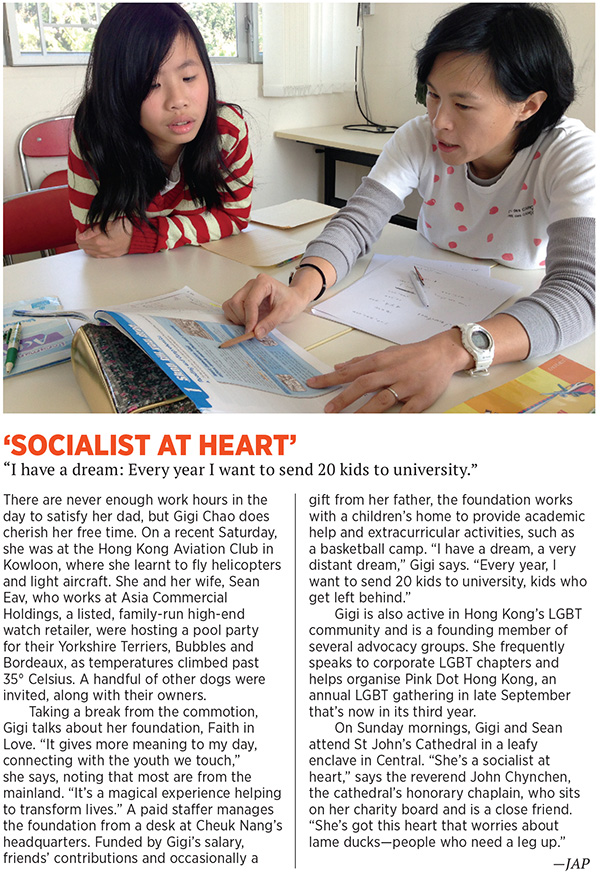 Gigi offers a tour of the company’s headquarters, pausing in front of an aqua-coloured board for One Kowloon Peak/Phase One. Cheuk Nang paid a premium to convert this site in Tsuen Wan, New Territories—formerly government staff quarters—into a 19-storey residential building with all 49 units having sea views. Red dots on 15 units mark ones that have been sold; the rest are leased. Residents will start moving in early next year.

Listed Cheuk Nang is a midsize developer, with a $390 million market capitalisation that Cecil says is heavily discounted because, he believes, its assets are worth $1.5 billion. He owns 71 percent of the shares. Net profits reached a recent high of $51 million for the year ended June 2014 before falling to $31 million in fiscal 2015.

Cecil, who started as an architect and then became a developer, still draws the main plans for new developments. After decades of focusing on Hong Kong, he’s been selling real estate there over the past two years. “Hong Kong property has come to a peak,” he says, expressing dismay at the city’s political rebels (he calls the 2014 pro-democracy Umbrella Revolution “terrible”) and what he sees as its sharp decline compared with Singapore. “It will still go on, and we can still make a reasonable profit, but it’s not as fantastic as it used to be.”

This morning Gigi made her weekly visit to One Kowloon Peak/Phase Two—five deluxe villas with private pools and a clubhouse—one of Cheuk Nang’s last Hong Kong projects still under construction. “I take instructions from daddy and execute,” she says. “I am his left and right hand. Some may say he micromanages, but he knows all the ins and outs of the business.”

Gigi admits she still has much to learn. This is her second stint at Cheuk Nang—she says her father fired her in 2004 for spending too much time on her side business in public relations and marketing for retail brands. She returned to Cheuk Nang at her father’s request in 2011. “The relationship between daddy and me has quite a unique dynamic,” she says, noting that he is always pressing her to work longer and harder. “His style is old-fashioned, which in real estate does work. Nothing will rock us in good times or bad. But daddy’s style lacks innovation, and it’s challenging from a management perspective. I do a lot more people management. Because I’m trained in PR, I am naturally good at it.”

Cecil’s brainstorming sessions begin at 6 am at Happy Lodge, his 16,000-square-foot mansion tucked within the sprawling Villa Cecil condominium development on Hong Kong island’s western shore. “I love spending a good two hours to think in bed,” he says, sitting down at the end of his 36-seat dining-room table on the home’s fourth floor. “We are trying to be more cautious in our investment so that during the last period of my regime we will have no debt. The best is ahead.” 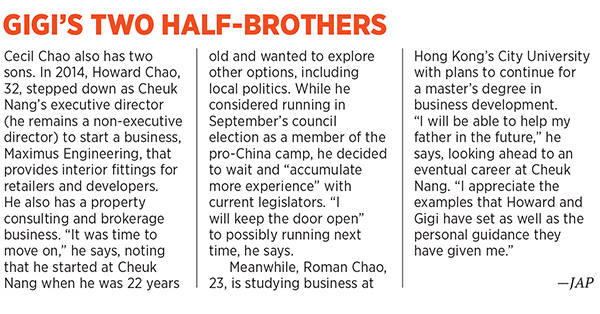 For now his sights are trained on the mainland, which accounts for 70 percent of the company’s assets, while projects in Macau and Malaysia await government approval. “We see lots of money coming in during the next three years” as projects are completed, he says, putting the figure at $1 billion. At home, wearing his trademark tinted gold glasses and a black-and-white silk-printed shirt with rhinestone buttons, he discusses his two large China projects, which are 25 percent sold. In Hangzhou, which hosted the G20 summit in September  and is home to Alibaba, he’s finishing a 14-block community. In Shenzhen, construction is nearly finished on a Hawaiian-themed community of 1,089 units in what Cecil calls the “fastest-growing property market in China, if not the entire world.”

Cecil dispatches Gigi to the mainland two days a week to check on the projects. But he already has a good idea of how things are going—he has five or ten of his “girlfriend” staffers onsite. “They’re intelligent, good-looking and send me information day and night,” he explains. Asked whether these are mistresses on the payroll, Cecil demurs. Gigi says she doesn’t know because “he has his own arrangement with them.”

For her and her colleagues, this unconventional “girlfriend” network for China was off-putting in the early days. “A lot of staff protested,” Gigi says, “but if you get beyond the office politics, it works in its own way.” Doing business in China is challenging, with its undependable rule of law and other obstacles, and these mainland girlfriends and their relatives—and their connections—can smooth the process. “I take off my Western helmet and see that it’s clever, what he’s doing,” she says. “He gets the best intel from them, almost like James Bond.”

From an outside veranda of the house overlooking East Lamma Channel, where he tries to swim regularly, Cecil quickly spins through the family history. His parents, law students who married in their early 20s, struggled to raise five children with no money, until his father secured a post as comprador with tobacco company Philip Morris just after World War II. Then in 1948, as the Chinese Civil War intensified, his father, Chao Tsong Yea, sold his assets, bought a ship and sailed the family to Hong Kong. He launched Wah Kwong Maritime Transport, which remains a prominent Hong Kong shipping outfit.

His father put up the money for Cecil’s first property company, but when the shipping business soured in the 1980s, “the bank said to my father, ‘You must sell the property company’.” Cecil eventually bought a listed shell company and changed its name to Cheuk Nang in 1988. “We’ve had big ups and downs since then—many times we thought Hong Kong would sink,” he says, recalling his worst fears before the British handover in 1997. “I bought a yacht and a helicopter. I worried the Red Army would come and I would need a means of escape. I was actually very serious about that.”

Cecil pauses, lowering his voice to note the passing of his youngest brother, George, the former chairman of Wah Kwong, just two days earlier. “I was the third son,” Cecil says, looking down. “Now it’s just me left.”
Descending his grand staircase to the third-floor foyer filled with Chinese artwork, Cecil offers more specifics about his own succession plan: “Every day I pass on my experience. Every year I pass on 10 percent. But I don’t know when I will pass the baton. It will depend on how Gigi does, how hard she works.”

“Chinese people don’t retire completely,” he continues. “If I don’t work, I lose my fun. If I retire, I am every day waiting to die. That’s no fun.”