Taser aspires to be the Dropbox for cops 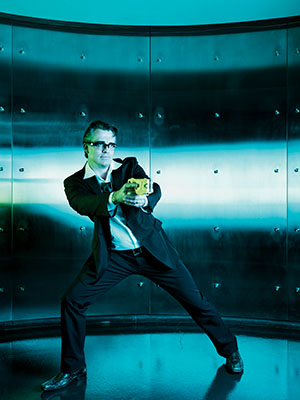 When Rick Smith is on an airplane and a seatmate asks him what he does for a living, he usually goes vague: “I sell industrial electronics.” He knows if he admits he is the founder and CEO of Taser International he’ll have to endure a flight trapped in a heated conversation about cavalier cops, cardiac deaths and some buddy or cousin who took it in the chest from one of his 50,000-volt electric weapons. “It’s tiring,” he says.

That’s not to say the 44-year-old is ashamed of what he’s built. The 750,000 Tasers he’s sold in 21 years have saved some 100,000 lives by avoiding gunfire, he reckons. “The number of gun deaths every year is a huge societal problem. I figured if it could be solved in a way that creates value, it would be a big business.”

And it is. In the latest 12 months the company netted $17 million on $148 million in revenue, but the problem is that stun gun sales aren’t as shocking as the company would like, up only 17 percent year to date. What Smith would rather talk about over airplane pretzels is Taser’s new growth business: Body cams and digital video storage. It has a pinky-size camera that attaches to an officer’s glasses for $599 and a deck-of-cards-size chest version for $399. Body cams have been around for years—Taser started making them in 2009—but fewer than 15 percent of police departments have them. That number is now headed toward 100 percent, say Smith and scores of law enforcement officials, in the wake of the fatal shooting of Michael Brown by Officer Darren Wilson in Ferguson, Missouri this summer. “I have changed my opinion on cameras,” said Seattle Police Officers’ Guild President Ron Smith, a longtime camera holdout, to the Seattle Times. “I believe that if there had been a camera on Officer Wilson we probably would not have had the riots and disturbances.”

Sales of body cams are only 10 percent of Taser’s revenue, but its stock popped 50 percent in the weeks after Ferguson. Smith saw a huge spike in interest but not much in camera sales—yet. Meanwhile, his archrival, the privately held body-cam maker Vievu, says it broke its own revenue record in the September after Ferguson, with a double-digit increase in sales and a 70 percent increase in requests for test units.

For Taser the hardware is the front door to the real revenue play: Its cloud storage service, called Evidence.com, which can run $15 to $55 per officer per month. Some 75 percent of the agencies that bought cameras in the last quarter signed up for Evidence.com, as opposed to storing the video on their own servers. The New Orleans Police Department, which deployed 420 of Taser’s Axon body-cams earlier this year, has budgeted $1.4 million for five years. The cameras cost less than $300,000; the bulk of what it’s paying is for data storage.

Cops don’t like being recorded any more than the rest of us. But the few studies on the eﬀect of body cameras show a significant reduction in citizen complaints. In partnership with Cambridge University, the police department in Rialto, California, using cameras from Taser, found that in the first year, 2012, use-of-force incidents by officers declined 60 percent and citizen complaints against police fell 88 percent. Rialto Police Chief Tony Farrar tells Forbes that in the cameras’ second year of use, progress was less pronounced but still impressive, with use-of-force incidents down by 46 percent and citizen complaints down 83 percent from the baseline. Another one-year study by the Mesa Police Department found that 50 camera-wearing officers had a third as many complaints as those without them and that those officers had 75 percent fewer use-of-force complaints than in the prior year.

Taser designs and assembles everything it sells at its futuristic headquarters in Scottsdale, Arizona. The 100,000-sq-ft shrine to the brand is a round, gleaming silver tower flanked by two glass walls with 40-foot-tall retractable shades featuring Goliath-size photos of Taser-toting cops. Metal doors swoosh open and close immediately, leaving the visitor in front of an iris scanner in a silent, blue circular room. Past this portal is a soaring 40-foot atrium with silver-grey catwalks crisscrossing overhead. When the Training Academy is in session, electric pops fill the air from customers and employees who want to experience being tased. PR head Steve Tuttle describes the eﬀect of diﬀerent models the way a sommelier describes wines. “The M26 had a bite. It was painful,” he says. “But the new models are clean. The shock is efficient.” Taser has been selling video cameras since 2006, when it started putting them on its weapons to provide evidence for then-rampant lawsuits against overzealous police officers. Unfortunately it mostly just provided a highlight reel of people being tased.

In 2007 Steve Ward, a former Seattle police officer who headed marketing at Taser, broke oﬀ to start Vievu, which debuted a $900 pager-size camera that clipped to an officer’s uniform and was activated by sliding a plastic panel down. Taser sued him for misappropriating trade secrets and for breach of contract. The case was ultimately settled. When Taser came out with its own body camera, it was a clunky three-piece system and cost nearly $2,000. “People hated it,” says Smith. “We sold maybe 200.” Vievu was far more successful. The 16-person firm has sold 44,000 cameras, or an estimated $30 million worth, over seven years. Taser didn’t come out with its tinier Axon models until 2012. It has since sold 20,000 of these.

Taser is trying to make its cameras more attractive than Vievu’s by engineering solutions to human fallibility, namely cops forgetting to turn them on or turning them oﬀ when they shouldn’t. Taser’s software keeps activity logs that a supervisor can review to determine whether a camera ran out of batteries or was manually turned oﬀ. Other companies don’t make these attributes as accessible.

In October Taser announced a feature that remotely activates cameras in a 30-foot radius based on triggers such as a cop car’s lights being switched on. Someday an officer’s accelerating heartbeat could be the “on” button. “The policy when you become an officer will be you get a gun, a Taser, a badge and a camera,” says Smith. He hopes that camera is made by Taser.