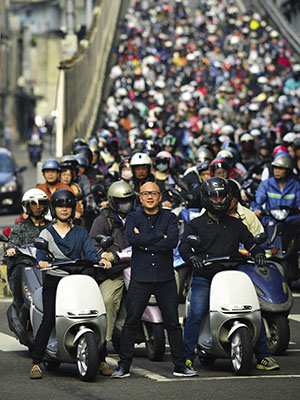 Horace Luke wanted to be the first person in Taiwan with a Tesla Model S when the gorgeous electric sedan debuted in 2012. Luke, the former chief innovation officer at smartphone maker HTC, is obsessed with beauty and function in all things. But his beloved Teslas were not sold in Taiwan (and still aren’t). He thought about importing one, but his girlfriend talked him out of it. With no home garage to charge it in, he’d have to juice it at the office and thus wouldn’t have use of it on the weekends.

Teslas and other electric sedans may be gaining ground in the US, where roomy garages are the norm, but Asia’s booming urban centres present a hostile environment for the clean car revolution. The cost of a Tesla is way out of the reach of the masses, and for the rising middle class in cramped apartment towers, there are few good places to charge the cars, let alone park them.

Four years ago, Luke and his former HTC colleague Matt Taylor set out to do just that. They left the corporate world and launched a startup called Gogoro that brings to bear design, technology and marketing experience also honed at Nike and Microsoft to create an electric motorbike called the Smartscooter. Debuting this summer in Taiwan, Gogoro’s bike is what you’d get if you mated a Vespa and an iPhone. With an electric motor equivalent to a 125cc engine, it accelerates to 30 mph in 4.2 seconds and maxes out at 60 mph, producing a futuristic whirring sound as air moves through the frame. You can open the trunk, start the motor and pick from 129,600 headlamp lighting combinations as well as custom horn sounds via Bluetooth from a smartphone app. Gogoro hasn’t decided on a price, but Luke says it would be in the $2,000 to $3,000 range of Honda and Yamaha bikes ubiquitous in Asia.

The Gogoro scooter would cost quite a bit more than a normal bike, given all its bells and whistles, but Luke has made it affordable through a clever business-model twist. Riders won’t own the batteries. Instead, they’ll pay a low monthly fee to swap portable batteries as needed from a network of charging stations. Batteries eat up a huge chunk of an electric vehicle’s cost. Luke plans to make the bike even cheaper, possibly with an eco-subsidy from the Taiwanese government.

Gogoro itself has plenty of financing, having early on raised $40 million from Samuel Yin (estimated net worth: $4.2 billion), CEO of Ruentex Group, which holds interests in retail, financial services and real estate, and $10 million from HTC co-founder Cher Wang. Luke is still closing on another $100 million round that will likely value the company at more than $400 million.

The battery-swap vehicle business model has been tried before—and failed spectacularly. Better Place, the Israeli electric vehicle startup backed by billionaire Idan Ofer, burnt through almost $1 billion trying to build a network of hulking robotic battery vending machines that were supposed to cost $500,000 each but ended up costing closer to $2 million. Better Place went bankrupt in 2013, but its charismatic founder, Shai Agassi, still remains convinced he was in the right. “The concept and the technology worked extremely well. In the long term, switching is actually cheaper than setting up charging stations.” Better Place’s bigger problem, besides the fact that the cars were ugly, was that it tried to expand to multiple countries before nailing one market. Luke studied Better Place closely to avoid its mistakes. His battery-charging GoStations, roughly the size of a snack vending machine, can be screwed into place anywhere there’s an AC outlet, and cost less than $10,000 apiece. In less than a minute, riders can pull up, yank out the 20-pound battery from a compartment under the scooter’s seat and be on their way. The batteries won’t work unless they’ve been authenticated to the rider via their smartphone app.

Luke is focusing on getting the Taipei launch right this summer before expanding to other megacities. Gogoro is targeting about 1.6 stations per square mile to make its battery-sharing scheme work and is getting prime real estate for its GoStations in a deal with the Taiwanese government, which owns about 75 percent of the country’s gas stations. Taiwan makes for an ideal proving ground, with 15 million scooters in a country of 23 million, one of the highest scooter-to-human ratios in the world. Around Taipei you’ll see entire families packed atop a Honda or loads of propane tanks strapped to the back seat of a Yamaha, all of them spewing lung-choking fumes.

“This product could be very promising,” says Taiwan’s premier, Mao Chi-kuo. “Not only could it be a good solution to solve our domestic transportation problems—I think they could be adopted in other markets.”

Born in Hong Kong to two accountants, Luke moved with his family to Seattle when he was 13. He went to the University of Washington in Seattle, where he studied industrial design with a focus on furniture. He made conceptual jewellery pieces and sold them to art collectors to pay for college. After graduation, he worked in marketing at Nike but soon left for the tech world at Microsoft. Luke started a project inside Microsoft called GoPC with the idea of shrinking down the PC to fit in your pocket. But the technology wasn’t there to make it small enough. “I learnt that timing is everything. You might have the brightest idea or be the most ambitious person and have all the funding you want, but the world may not be ready for it.” He later joined the team that began working on the Xbox.

In 2006, he moved back to Asia to be chief innovation officer at HTC, where he could continue his dream of trying to fit the internet in a pocket. The iPhone, introduced a year later, would change everything, and pretty soon, he found himself collaborating closely with Andy Rubin, the creator of the Android operating system, after he joined Google’s mobile team.

Luke lived for phones while at HTC. He carried around six at a time. But by 2011, he was burnt out by the smartphone race. “Every industry at a different time requires a certain type of talent,” he says. “It has entered into its evolutionary stage instead of revolutionary.” Since Luke left HTC, the company went into a steep financial decline from which it is only now recovering.

The need for the new is palpable with Luke. Over dinner at a soup dumpling restaurant in Taipei, he gets up from his seat and goes over to a window where customers can observe workers carefully constructing each dumpling to have exactly 18 intricate folds. “I couldn’t do that. It’s too repetitive,” Luke laughs. “I’d try to innovate, but they’d kick me out. If I wanted 19 folds, fired!”

Throughout the late 2000s, Luke and Taylor, HTC’s chief technology officer, had started talking about putting a company together. “Horace had been talking about the idea of super-efficient transportation,” said Taylor. “And he’s always been a car nut.” Everywhere they went in Asia, they saw cities choking on clouds of scooter exhaust. The two Gogoro co-founders looked at what Tesla had borrowed from the department of energy to get Model S on to the market—$465 million—and thought they could build a scooter for a tenth of that.

After raising $50 million from Wang and Yin, the two thought they’d be able to fast-track a new bike using off-the-shelf components from Taiwan’s massive manufacturing base. But Luke soon realised that few suppliers would be able to meet their performance demands. The biggest supplier of electric motors, for example, was more attuned to building motors for washing machines and blenders. So Gogoro had to set about building almost everything itself. Crucially, it scored a partnership for its batteries with Panasonic, Tesla’s choice of battery supplier as well. All the design and prototyping work has been carried out in secret in a 266,800-square-foot space in a dusty industrial suburb 20 miles south of Taipei. Luke had the windows covered in white paper to block out curious onlookers. Inside, the floors, walls and ceilings have been stripped to bare cement, and its 364 employees all work in the open. Sprinkled around the office are expensive Robocop and Iron Man toys Luke has collected that cost a couple of hundred dollars apiece. Plans call for another 400 hires this year, many of whom will take up space in a building across the street with another five storeys and 89,000 square feet of space.

The Gogoro Smartscooter’s sleek, simple design has won plenty of favourable comparisons to Apple products since its unveiling in early 2015. “The world has become more software-oriented, making things simpler,” says Luke. Clean transportation might as well be push-button, too.

Tweets by @forbesindia
Running out of buildings to name after yourself?
Randstad CEO: There's a surge of hiring activity in India