A. Damodaran: The Despair of The Ganges

The Ganges has sustained a civilisation, including the world’s oldest continuously populated city of Varanasi. It has now become the victim of the same civilisation that bloomed in its bosom. In many ways, the majestic Ganga symbolises one of the biggest conflicts of our times — protecting the environment and biodiversity without compromising growth, development and economic progress 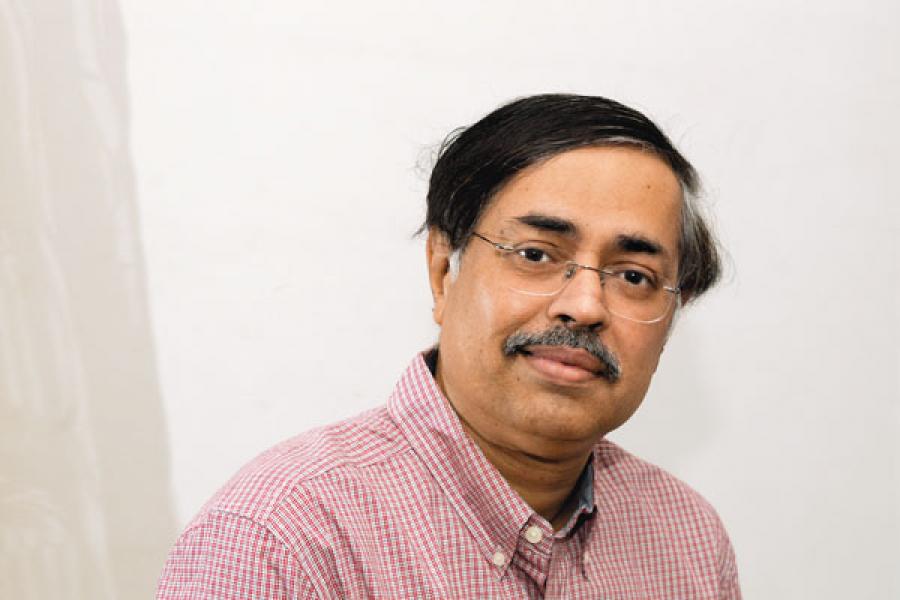 A. Damodaran
Teaches economic and social sciences at the Indian Institute of Management, Bangalore. He has been on an advisory group of the ministry of environment as well as environmental fellow at the US Environment Protection Agency. He is also the author of Encircling the Seamless — India, Climate Change and the Global Commons

The Ganges has never been in greater despair! For many years she ungrudgingly provided a watery grave for half burnt human corpses. But now the immense strain on her long, windingly beautiful body is palpably evident. Trying hard to live up to her reputation of being a sin cleanser, the toxic sin of pollutants poured on her by industrial units situated along her banks seems to have weighed her down. The assault continues in spite of ambitious action plans to restore her to her prime. Her famous sisters, the Narmada, Mahanadi, Brahmaputra, Godavari, Krishna and Cauvery who nourish and nurture human settlements in Central, North East and Southern India lie parched in critical stretches, choked with silt, thanks to relentless deforestation and unsustainable projects on their catchments. If some of us have our way, we would even stifle the natural course of the seven sisters to the sea by positioning our industry, tourism and real estate complexes along critical outfall points.

India is the latest showpiece in the world, a democracy that has sloughed off her developing status to rise as an emerging economic power. The latest gossip making rounds in world’s finance capitals is about the Indian economy steadily posting a 10 percent plus annual growth rate in the current decade. In reality, the Indian economy is left with no other option. Our tremendous demographic dividend of ‘quality human capital’ is also our liability. It compels us to churn out more and more ‘quality jobs’, not just for one or two years but for at least three decades at a stretch. We need more power projects, transport infrastructure, services and manufacturing units that do not tax our environment. All the same we have our responsibilities towards large communities of forest dwellers and poorer sections of the society who, despite the country’s economic miracle, eke out a miserable existence.

The chasm between the educated class and the poor communities of India is not easy to manage. For sections of prosperous India that dream of driving Ferraris on superhighways, the key concern is to have their deep fuel tanks full and brimming. They do not hear the gasp of the Ganga. They see nothing tragic about gigantic land gougers, comically branded ‘Caterpillar’, breaking lush green landscapes to feed CO2 guzzling power plants. However, we also have many others with us who would like to resolve the environment-economy pull off. In the preceding three years many Indian companies have voluntarily come forward to declare their carbon trail.

In reality, we have our share of imagined trade-offs. Let us take illegal mining in the Western Ghats. Today, things have come to such a pass that we deploy aerial vehicles (our version of ‘snoopy’ drones) to detect convoys of trucks carrying contraband minerals. Where is the trade-off problem here? All that we need is the will to crack down by drawing in the support of local communities.

The real challenge lies in resolving trade-offs that rise from environmentally sensitive projects that seek regulatory nod. In the past two years India’s Union Ministry of Environment and Forests has, by saying nay to certain classes of projects, attempted to indirectly guide our trajectory of development. However for this indirect message to gain mainstream acceptance, we need to bring in a philosophical shift of policy in at least two directions. First, by having a clearer definition of what constitutes ‘economic progress’ and secondly by bringing in principles of environmental governance, which Oliver Williamson terms as ‘fiat and forbearance’.

The term economic progress suffers from multiple connotations that are conflicting in nature. For many of us economic progress is about livelihood. For others it means improvements in standards of living. Indeed there is a fringe that considers progress to be capabilities to enjoy high-end, effulgent lifestyles.

As citizens of an emerging economy that has taken on voluntary commitments to mitigate greenhouse gas emissions, Indians should not pursue opulent lifestyles. Projects that facilitate unsustainable lifestyles do not necessarily involve high economic progress. They tend to waste energy and water resources. More fundamentally, they retard flow of investments to ventures that generate jobs for our quality human capital. Therefore, we have a strong case to eschew unsustainable forms of lifestyles with zero social value from the lexicon of economic progress. Once this is done we find the trade-off problem to be less opulent.

Thus, to resolve the tiger problem in an inclusive manner will be delightful to  some of us who zip off to tiger reserves for a break. It also serves to enhance the economic welfare for poor sanctuary dwellers. Likewise India’s sensitive coastal belt that is home to unique mangrove and coral reef ecosystems and traditional fisher communities is threatened by swanky tourism complexes, luxurious real estate projects and polluting industrial ventures. These developments have created social and environmental tensions on our shorelands which can be overcome by imaginative siting of enterprises that give precedence to livelihoods and greener lifestyles over effulgence.

Let me now get to my last point about ‘fiat and forbearance’. In the 1980s and 1990s, India’s Central Government ran its writ on environmental matters. Today one sees a clear weakening of the regime of ‘central government environmental fiats’ on critical matters. More than resistance of State Governments, it is the alternative viewpoints of local communities that forms the real challenge. The spread of the anti-endosulfan movement from Kerala to Karnataka symbolises horizontal mobilisation of alternative viewpoints on key environmental problems affecting local communities. In the absence of a platform for sustained dialogue and debate, these movements fester, grow vociferous and ultimately succeed in changing entrenched macro-policy positions on key environmental issues.

It is obvious that such developments open up new complexities in national environmental decision making. They shock and shake regulators and government formations for right or wrong reasons. More fundamentally they foretell winds of change that seek local level action and dispute resolution. In the days to follow, local communities will seek enlightened fiats and oversight. They will also pine for forbearance which allows them to be arbiters of their destiny. There is a bonus here. Forbearance as a principle has the ability to facilitate informed local damage assessments and lessen the torture that socially conscious industries have to put up to wade through centralised regulatory channels.

Joseph’s Lelyveld’s volume on Mahatma Gandhi is the latest buzz. Before I conclude, let me take you to the buzz we miss. It revolves around a 1928 article in Young India. The Mahatma wrote ‘Have true industrialisation. Do not rob the poor millions of the only means of honorable life and call it industrialisation.’ The message cannot get simpler than this. Today we need progress sans mindless lifestyles. We also need livelihood avenues for the poor. We require clean technologies that exploit our natural resources the least while providing vocations for our burgeoning young population. We need a favorable investment climate for clean projects. We also desire to see mother Ganga in her traditional splendor. And for all this to come true we need fiats that go with forbearance.