Matthew Barney: Engineers Are To Indians What Rock Stars Are To Americans 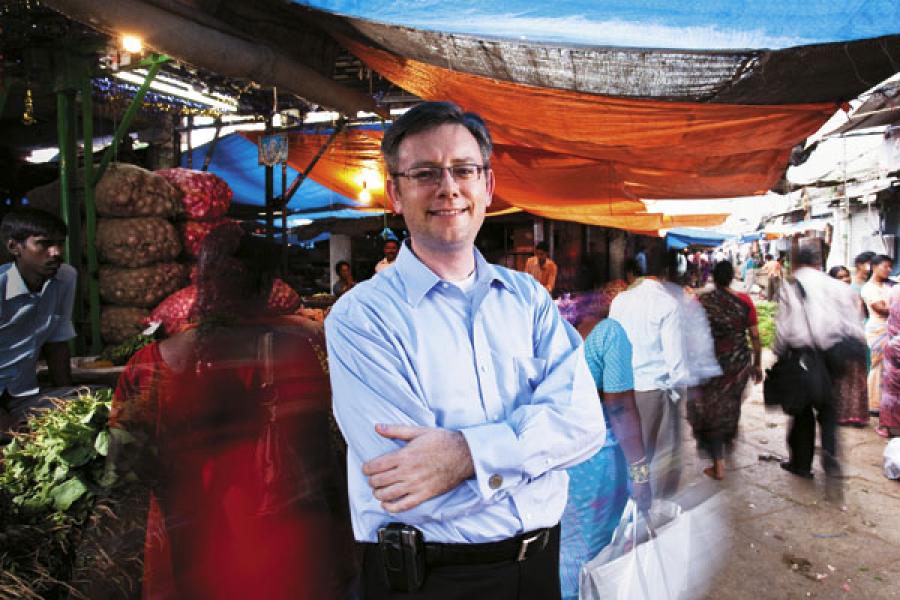 Image: Mallikarjun Katakol for Forbes India
BLENDING IN Mathew Barney at the biggest fruit and vegetable market in Mysore

I have been married to an Indian for many years, but it is different living here. My wife thought I was nuts when I wanted to apply for Person of India Origin (PIO) status, but I want to be a role model for my children. They should learn to respect all cultures. Whenever I go to a new place, I always try to learn the local language as a sign of respect for the people and culture of that place.

My kids were born in my country [the US] and now they live in their mother’s country. The reference to education here is unlike anything in the US. If you look at any American newspaper, like the Wall Street Journal or the New York Times, you will never ever find premium advertising space for education. Instead you will find car or drug ads. Here it is common to find MBA programme ads and a separate section for education in the main newspapers.

In some companies I worked for [abroad], people advised me not to tell others that I had a PhD. Here, people like to call me Dr. Barney. My wife, who has studied cross cultural differences, says that in India, hierarchy is fine. In my culture, it is much less okay. So what if I am a geek, I am no better than you. To de-emphasise hierarchical difference is very important [there]. In the US, it is more about what I can do, than what pedigree I am from; but in India, it is about whether I am from the IITs or the IIMs. I was hoping there would be an opportunity for me to come to India someday because we — my wife and I — are industrial psychologists, and India has so many people at work. Industrial psychology follows the same science that is in engineering. We are not software people, but psychologists, who speak to customers on leadership, and this adds value to our customers. Also, at Infosys, my team looks at the top leadership team, and we have a one to one ratio of a trainer to the leader, so that both of them are familiar with each other. I find Indians more receptive to an evidence based approach than the average American. I guess that Indians are slightly more intellectual, whereas Americans are pragmatic business people.

Indian leaders are much more open to science than European or US leaders. They do not shy away from complexity, which is refreshing. When I made my pitch for the position to head Infosys Leadership Institute [ILI], Narayana Murthy turned to Nandan Nilekani and said ‘he speaks like an engineer’, and I thought that was such a big compliment because engineers are to Indians what rock stars are to people in the US. Although industrial psychology follows a science-based approach, not many people in India know anything about our science. Also, higher studies for psychology in India are lacking. When my wife finished her under-graduation in Pune, she had to leave the country to pursue her dream. What happens is that most students leave to study abroad and eventually work abroad.

I am trying to encourage more people to come back here to work. I am looking to recruit more people, and we already have one Indian who has a Ph.D in industrial psychology who has agreed to come back to India to work. We came at the height of recession in the US and after 26/11, so there was a lot of checking that happened with our baggage; they had to open every bag. Also, initially when I came, it was hard as I had come without my family. I missed my younger son’s birthday and he kept hearing of ‘My’sore. One day he turned and asked me, “Daddy, when are we coming to daddy-sore?” There have been challenges for my kids, but the embarrassing thing is that they have adjusted so well that when their American friends call and say they miss them, the kids will not say anything. We are busy coaching them, saying it is nice to tell your friends you miss them too. They are genuinely happy here. It was okay to go from daddy’s country to mummy’s country as we kept visiting India, ate Indian food regularly, and also had their grandparents come and visit us in the US.

The way of working here, however, is different. There is this expectation to always pick up your phone, which is not something you are used to in the US. In the US, I had one landline and one cell phone. If ever a call was missed, you left a voicemail and you would get back to someone. Over here I have three phones, and no voice mail.

I knew India was diverse, but I did not understand how diverse. For example, I never knew there was a community called Coorgis, and that they ate pork and traced their ancestry to Alexander the Great. Also, I was not nuanced on why there were so many holidays in the Indian calendar. I dare you to find any country more diverse than India.

Tweets by @forbesindia
eBay: E-Commerce To Be $1bn Biz In India By 2013
Being Beckham