"The Line Between Work and Social Life is Blurred in India"

Whether it is in business meetings or in social life, Indians don’t hold back, says Mark T. Robinson, CEO, Citi South Asia 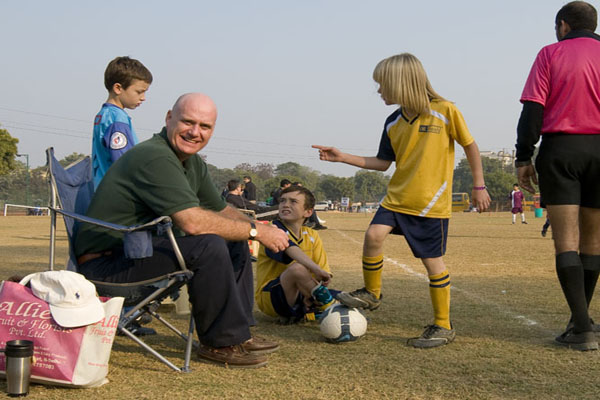 One of the great things about travelling with children is that you get to see everything through their eyes. When we moved to India, my wife and I had a lot of fun seeing our children’s reactions.

My first trip to India was in the mid-1980s when I was working in Pakistan. Coming from Karachi which is a dry city, the first thing that struck me was how green Delhi is. I think everybody who visits India for the first time feels a massive sensory overload. There is so much to see. Just standing on the side and watching life go by can often be pretty interesting.
Before Russia, we were in Turkey, Hungary and Hong Kong. Settling down in India has been quite easy. We meet many people with similar backgrounds, through work and through the children’s schools — by meeting other parents. My wife also joined some international women’s organisations which are both great ways to meet people and very helpful in settling in.
We had just come to India and were already receiving invitations from people, not for corporate functions, but to their homes! Indians include you in their social life, they have big parties and big weddings.
The line between work environment and social life is blurred here, which I really like. I find the closeness of the family here and the multiple families living together here pretty cool. I know our kids would love it if their grandparents could live with us — I’m not sure my wife would always find that equally positive!
In India, you meet people with similar career paths. You bump into the MD of a company and say, ‘Oh you were in China then?’ or something. For decades many talented people here have been going to university and then joining companies that offer them careers in different markets.
In countries like Hungary and Russia, the commercial environment is relatively new. These economies are still going through a very big political and economic development. Turkey and India have a little bit more in common: They have been open to international trade and business for a long time.
India is unique in some aspects like the size of the economy, the large domestic market with strong local brands and the large amount of aspiring consumers. In contrast, Russia is more about exports, which are mostly natural resources.
Here people leading companies have decades of experience. There’s much that they can teach people in other countries about business. In that sense, India has a very well-established commercial environment. While the country accelerated its international business in the last 20+ years, before that people were travelling and working all around the world and were well exposed internationally.
People in India don’t hold back. In meetings, everybody wants to contribute intellectually — without hierarchy. When I arrived and we were having meetings to discuss things, I realised that no one wanted to end the meetings till we absolutely nailed all issues in detail. In other places, if you got it roughly right, you’d leave it to the teams to take it on from there.
In India, many people spend a lot of time in the office — and this is not related to a deal or a project. Some people assume that we need to spend long hours in office. There is an expectation from young managers that their best people are those that spend the most time in office. I wish we could do a better job at managing time and productivity. That may be a reflection on the manager or maybe we don’t have the right processes in place.
But I do think that there is always going to be a lot of hard work in the economy that is growing at 7-9 percent. We are going to spend more time looking at how we train our people. We need to hire people more for their personal characteristics and teamwork rather than their report cards.
There is a heightened sense of hierarchy that particularly relates to when people join the firm. People generally think that their careers should have an upward curve all the time, 24 hours a day.
The challenge is: How do you take something that is extremely healthy (i.e., ambitious people) and make sure that that ambition is not causing distraction and demotivation? Because if you bring on people and they all think that in four years, they will have my job, 99.9 percent of them will be disappointed.
The question is: Do you want a superstar team or a team of superstars? I’d rather have a superstar team. You need everybody to work together and you got a team of people who are, maybe not Number 1s — but Numbers 2 and 3 or 4 in their specialisation. But if they all work together more successfully than the Number 1 guys, they will beat the other one. This goes back to spending more energy figuring out how to have a recruitment process which identifies soft characteristics of an individual and places equal weight on them as some of the intellectual characteristics. I don’t have the answer for this yet.
I have some people who view their success or perceived success by their boss as the most important thing rather than the team’s success. That’s something which has to change if we are going to be as good as we can be
(As told to Neelima Mahajan-Bansal)