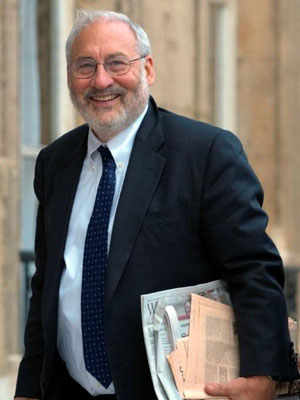 Image: Philippe Wojazer/REUTERS
Joseph Stiglitz, University Professor at the Columbia Business School, the Graduate School of Arts and Sciences (Department of Economics) and the School of International and Public Affairs

Even though the signs of recovery from the financial crisis are strongest in Asia and the region is touted to be the most likely source of economic growth globally, rural poverty remains rampant.

“The focus on agriculture is absolutely essential,” says Nobel Laureate Joseph Stiglitz, referring to developing agrarian countries in Asia, in particular Myanmar (Burma), where he was invited by the United Nations Economic and Social Commission for Asia (ESCAP) to advise on the country’s economic policy and rural poverty alleviation.

So why then has Myanmar, once touted as the ‘rice bowl of Asia,’ failed to achieve the growth that was predicted by many? Stiglitz believes it’s partly because they’ve succumbed to what he calls the ‘natural resource curse’.
Most countries with large (production) of natural resources do more poorly than those without, which is an irony,” he told a press conference in Singapore organised by the Foreign Correspondents’ Association. And he attributes this to “very big failures in the development and management of natural resources, (and) in agricultural development.”
“Quite often, countries with large amounts of natural resources suffer from exchange rate appreciation and the result is when they sell the natural resource, the value of currency goes up – they produce natural resources but no jobs. You can see this all over the world where you have rich countries and poor people. That’s why it’s so important to manage the natural resources from a macro-economic point of view,” he explains.
Emerging economies which fail to exploit the potential of the assets they have below the ground – such as oil and natural gas – are likely victims of the ‘curse’. If you can’t “re-create” these assets above the ground, he says, “you’re poor, because you’re destroying your asset base. If you squander your assets, you’re jeopardising the future of your country.”
The problems are further exacerbated in the agricultural sector, with farmers currently facing interest rates of up to 10 per cent per month. According to Stiglitz, this has resulted in many farmers not being able to get the credit they need to buy fertiliser and high-quality seed, so the full farming potential is not realised.
Trade finance has been a problem for emerging economies in Asia following the financial crisis, but has since ‘ameliorated,’ Stiglitz told INSEAD Knowledge. “Capital flows more broadly are down very markedly. And when I say capital flows, particularly foreign direct investment, and in some cases reverse capital flows. You saw that at the moment of the crisis, where money was flowing into the United States. Why? Because we had basically underwritten all our banks. If the government guarantees, where is it going to be the most strongest? They’re going to be the strongest from the US government than a smaller developing country, so money flowed into the United States.”

“More generally and more long lasting – foreign direct investment, trade in general. The lower economic growth means that trade is lower. The impact effect of trade finance is now being ameliorated. That is part of the reason why Asia is recovering. Another part of the reason Asia is recovering is that China is engaged in much stronger policies … and had prudent policies beforehand. So unlike the United States, which had a huge deficit as it went into the crisis which became bigger, China has built up a large reserve, so that they can engage in much stronger counter cyclical fiscal policy.”
Another key issue for developing countries relates to remittances which are a major source of income for most emerging economies. “When the economy goes down, the first people to lay off are your immigrants, your migrant workers. So that is having an impact on many countries ... One of the interesting things is the complexity. Nurses don’t get fired, people still get sick. So the countries that are exporters of nurses have been relatively insulated. Construction – some countries that send migrant’s workers in construction – they’ve been devastated. So that’s an example of the varied patterns.”
To stimulate development, Stiglitz, a former chief economist of the World Bank advocates that the economic and political processes of a country must be viewed not as separate entities but as interlocking parts. “If one wants to achieve economic security, economic stability, sustainable development, one has to engage in participatory processes in trying to absorb some of the lessons that some of the (other resource-rich) countries have absorbed.”
Investment in human capital and education, he adds, is also needed to keep the growth engine running. “You get older one year at a time, and no matter what innovations have occurred, that process of ageing has not stopped. So therefore if you don’t renew your human capital, it depreciates just like physical capital depreciates … In economies, you have to run to stay still; that the world is changing, and you have to change even if nothing else is going on.”
Stiglitz is hopeful though that for a developing country like Myanmar – which has never been integrated with the global economy, but unwittingly became an “innocent” victim of the financial crisis nonetheless – the tide is turning.
Perhaps it’s the wake-up call that Cyclone Nargis induced. Not only did it obliterate entire villages, killing some 140,000 people and destroying 800,000 homes last year, it also devastated the credit system, destroyed fertiliser and livestock. In short, it ruined what was left of the economy.
“Globalisation has opened up their eyes at this point,” Stiglitz says of Myanmar. “Once you get your eyes opened, you can’t close them again … In general, there is the hope that this is the moment of change for the country and there is a hope that it would be a mistake to miss this opportunity at the moment in which things might work out.”

Tweets by @forbesindia
"The Line Between Work and Social Life is Blurred in India"
Web 2.0 Innovation in the Banking Industry