Web 2.0 Innovation in the Banking Industry

Technology innovation is at the forefront of BBVA's business strategy. The bank is Spain’s second largest and part of the Fortune Global 500 list, where it is close to the 200th biggest company in the world. In 2007, the bank began a Web 2.0 innovation and transformation journey to fuel growth and expand current offerings in financial services. As a strategic imperative, the bank decided to improve its technology architecture with world-class banking solutions. Francisco Gonzalez, BBVA’s Executive Chairman summarized the company’s vision: "Our aim is to transform BBVA into a winning player in the global banking industry of the 21st century. We need to think of different approaches to serve customers, and technology is a key element in our business model.”

A new organization was created within the bank to set the pace and reinforce this vision. New units looked at innovation with a focus not only in regards to technology platforms but also business development. Most surprisingly, the bank decided to embrace Web 2.0 tools as a means to support its Innovation and Transformation journey. The bank managers began promoting blogs to open new channels of communication in a spontaneous and non-supervised form. This was a radical change from the strict regulations and supervisions found in a traditional bank like BBVA. 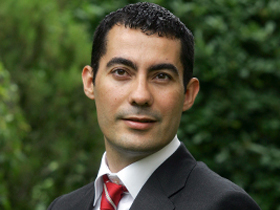 José Esteves – Chair and Professor of Information Systems Department
A INNOVATION AND TRANSFORMATION JOURNEY
The area of innovation and development (I+D) was created in 2003, marking the first time a large financial institution in Spain decided to create such a structure with the aim to spread the internal message that innovation is the engine for differentiation. BBVA developed innovation in three main areas: 1) traditional business, 2) new business models, and 3) innovation in technology. Then, in 2006, innovation was extended to the bank’s various business units since it was believed that after three years the organization would fully embrace innovation’s advantages. The business units were also becoming increasingly responsible for their own activities. An innovation area was created for each business unit, as well as for HR and IT.
The Corporate Innovation area was created for the leadership and governance of innovation across all business units. In May 2007, the bank was ready to initiate its most aggressive strategic plan to date: the innovation and transformation plan. The plan detailed a number of performance objectives for the bank, such as 20% growth in customers, and the allocation of €5.6 billion to the period 2007-2010.
THE RIGHT LEADER
The decision about who should be the person to lead this cross-corporation innovation was crucial. Manolo Castro, with an extensive career at BBVA and experience in directing several units was an obvious choice – not to mention his attraction to new technologies. By late 2007, a newly refurbished palace in the heart of Madrid became BBVA’s Centre of Innovation and home to the corporate innovation team. It is here where BBVA established and developed, led by Manolo Castro, its Web 2.0 strategy. In an effort to cultivate an environment where innovation could thrive, the Center established a culture receptive of failure. Thus, performance was not measured with traditional business figures, but projects were kept or dropped based on their capacity to make significant improvements in customer experience, accessibility, and usage. BUILDING A WEB 2.0 BANK
In a board committee held in November 2007, the bank made a firm decision to work with a flag service: Tú Cuentas. The tool used personal finance management technology to help the bank better understand its customers’ financial behaviour.

BBVA observed that while people could manage their short-term view of finances (a few days or a week), most did not keep strict control of their overall spending. For instance, they did not compare their spending on dining out with others who had similar financial, demographic, or geographic backgrounds. Tú Cuentas enabled a new experience for BBVA’s on-line customers built on five Web 2.0 traits: aggregation, auto categorization, personalization, collective intelligence from the community, and recommendations.

The rollout, however, posed significant challenges in regards to integrating the new technology with the bank’s information systems. The first challenge was to gather all the relevant information in a single place. BBVA created an Aggregation System that would let the bank store information from third party bills such as gas/mobile as well as information accounts customers held at other banks in addition to BBVA. On behalf of its customers, Tú Cuentas hit the websites of companies that were part of the aggregation system and retrieved the relevant information. A periodical synchronization between the customer websites and Tú Cuentas allowed for BBVA to skip changes in the layout of these websites.

In order to improve the customer experience, BBVA focused on site usability implementing the different capabilities of the tool via “widgets,” which a customer could easily personalize in his or her Tú Cuentas homepage. In addition, the tool included capabilities that allowed users to “tag” information about their expenses as well as a recommender function that helped users better manage their payments.

Customers of BBVA on-line banking services have embraced Tú Cuentas. Four months after its launch, Tú Cuentas reached 250,000 active users – representing 16% of BBVA’s total online banking customer base. Furthermore, customers of Tú Cuentas spend 2.5 times more time on the BBVA portal than other online banking customers and the service adds new opportunities for cross selling of other products, financial, and non-financial.
SHIFT HAPPENS
An innovation and transformation plan such as the one the BBVA initiated is associated with business and organizational change. To embrace Web 2.0 strategy, BBVA focused on rollouts that set examples of how to make the necessary changes to corporate culture, including “investing a little, learning a lot.” By focusing early on those examples, the bank was able to gain valuable insight in addressing the key assumptions and risks behind the strategy of the new rollout.

This Web 2.0 change could not have been realized with the existence of project and business champions. An innovation champion simply can’t exist without the right actions from a company’s very top managers and BBVA’s senior managers clearly communicated the strategic importance of Web 2.0 vision. They created a separate pool of resources for growth initiatives and fiercely protect that pool. It was critical for senior management to change the way they interacted with project teams. The legal department played an important role in this process. Initially, the legislation was a big barrier to the development of the whole Web 2.0 initiative and BBVA soon converted the legal department into an enabler of change.

BBVA has made a strong commitment to collaborative innovation with the adoption and development of web 2.0 tools – a clear challenge to those who claimed innovation was impossible for such a traditional industry as banking.