For more than 50 years, Fabergé was nearly synonymous with Forbes. A story of eggs, empires and enthusiasm 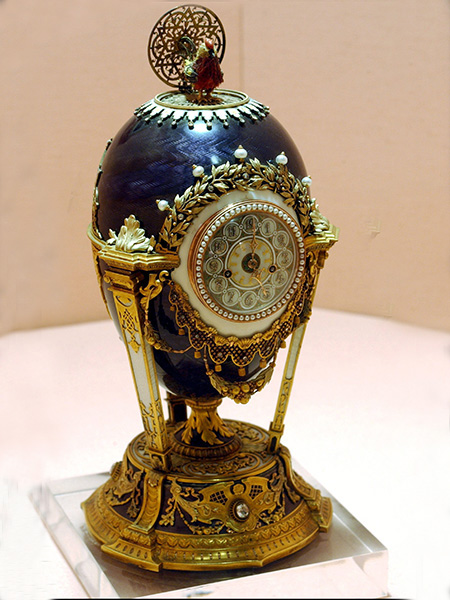 Cuckoo for Fabergé: The Cockerel Egg was presented as a gift in 1900 from Czar Nicholas II to Empress Maria Feodorovna
Image: David Lefranc /Gamma-Rapho via Getty Images

Yes, there were his motorcycles. And yachts. And homes on three continents. And, of course, there were the hot-air balloons, including one shaped like his palatial estate in Normandy. But as trophies of capitalistic triumph, nothing topped Malcolm Forbes’s glittering collection of Fabergé eggs. He posed with them, hunted them with czarist zeal and built a substantial part of Forbes’s aura around these ovoid wonders.

Forbes purchased his first Fabergé egg in the 1960s, a jelly-bean-size treasure emblazoned with a red cross to mark the role of Russian noblewomen with the Red Cross during World War I. From there, he began purchasing full-size Fabergé eggs, including the most coveted of all: The eggs created by the Russian art house for the imperial family. In all, Forbes owned many more Fabergé pieces than just the eggs—a collection of hundreds of objects that ranked “second only to Queen Elizabeth”, says Géza von Habsburg, a former Christie’s executive, Fabergé expert and a Forbes collecting consigliere.

Forbes was determined to possess more imperial eggs than the Soviet government. “It became essential for him to outdo the Kremlin,” recalls von Habsburg. And, in 1985, he appeared to have accomplished that goal when he purchased the eight-inch, pearl-encrusted, violet-coloured Cockerel Egg—which includes a functioning cuckoo clock—for $1.8 million (some $4 million today). With that acquisition, by Malcolm’s count, he owned 11 Fabergé eggs—a number that would grow to an even dozen by the time of his death in 1990—while the Kremlin had a mere 10. “Forbes was started in September 1917,” notes Malcolm’s son Christopher. “The Soviet government started in October 1917. They were two ecosystems at war.”

Forbes almost lived long enough to see the Cold War end and capitalism’s victory over communism firmly secured. But his triumph in the Egg War turned out to be short-lived. Further research on the eggs’s provenance led to an uncomfortable discovery: Malcolm had actually owned only nine imperial eggs, not 12. (The Forbes family eventually sold them all to Russian billionaire Viktor Vekselberg for an undisclosed amount in 2004.)

Still, von Habsburg says, Malcolm’s gleeful and highly public Fabergé quest unquestionably elevated the collectibility and value of the pieces. He purchased the finest eggs—the Coronation and the Lilies of the Valley—for roughly $2 million combined (about $6.5 million today). Now they would “probably sell in excess of $30 million”, says von Habsburg. “Each.”