Digital transformation is about outcomes, not change for the sake of change

Leaders from startups and local centres of multinational corporations discussed the importance of end results in going digital, in a Forbes India LeaderSpeak discussion in Bengaluru 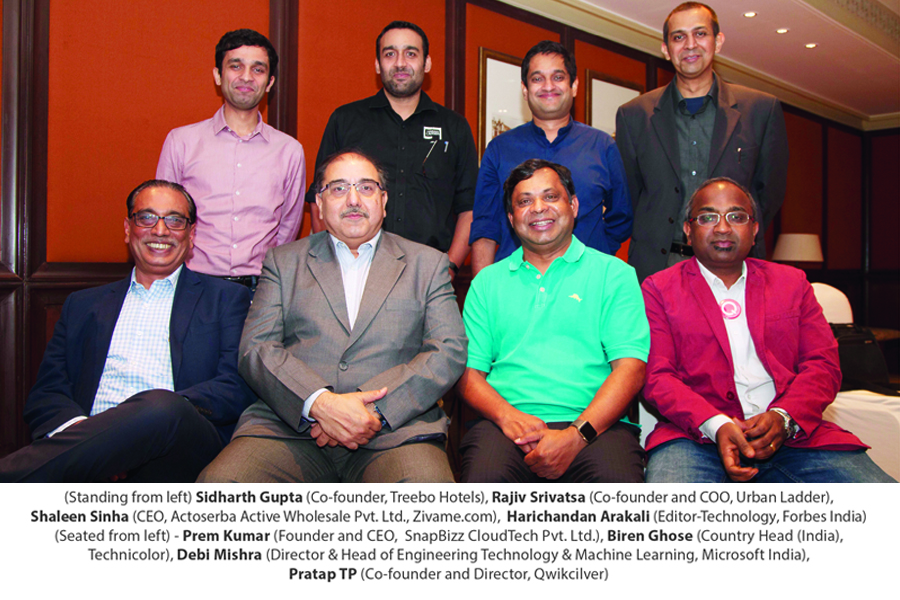 Leaders of some of Bengaluru’s well-known startups, as well as multinational companies with established centres in India’s tech capital, came together for a thought-provoking discussion on ‘digital transformation’ recently. The result was an elevating exercise in demystifying the much-abused phrase, and among the ideas that came out was that digital technologies were to be harnessed for highly desirable outcomes.

At the heart of the changes that are upon everyone, be it an individual, touched by the digital technologies by way of a smartphone, and the resulting choices in her hand, or a multinational company grappling with faster obsolescence of technology, is data, the panellists agreed.
“Data is going to drive a lot of business decisions or optimizations and things like that. Digital transformation is here to stay for sure, it is going to be a game changer,” said Prem Kumar, founder and CEO of SnapBizz Cloudtech, which is helping thousands of small retailers go digital, with its simple in-store solution.

“The challenge seems to be how do you do this in a very inclusive fashion and how do you impact large numbers at scale to be part of this whole change,” Kumar added.

For Rajiv Srivatsa, co-founder and COO of Urban Ladder, which has pioneered sales of high-quality affordable furniture on its online platform, there are three aspects to tapping the huge volumes of data his business generates. The first is about taking the data from the quarter of a million visits the website gets a month and translating it to the best offline store experience possible, as Urban Ladder begins to go brick-and-mortar as well.

The second is, “how do we track every single thing in across not just one warehouse, but 20 other places like retail stores and selling through multiple channels like we sell through Amazon and Flipkart, we sell through our interior designers, so we need real time access to our inventory at a level which is not seen before even by us because we are selling multiple channel and selling real time and live.”

And finally, it’s about harnessing advances in technology, such as virtual reality and augmented reality to elevate the customer’s experience and boost online conversions: “Can we create an infinite store inside of the VR experience for you to actually see pretty much any product live and we actually have a working live VR on Oculus which is far better than what an international retailer has done out of India, done with modelling here. And use cases like that which can drive customer to convert not something just for the sake of gimmicky, marketing stuff, but real use case that a customer wants to convert in our store.”

The idea of using data from the online experience to drive sales in the offline environment resonates with Shaleen Sinha, co-founder of Actoserba Active Wholesale, which is a popular online lingerie seller under the brand Zivame, as well. “I think fundamentally we are saying this. When she walks into a store, in digital stores over last five, six years, we have figured out a lot of things to do in terms of bringing a personal experience to our customer. How do I build the same thing in an offline environment?”

Beyond that, Sinha points to how his Bengaluru-based venture is attempting to push the envelope in terms of design. For example, if a certain design is historically seen to be successful, Zivame’s lingerie designers will work on innovating further on it to create new products, while retaining the functional aspects that contributed to the popularity of the particular lingerie products.

The theme of digital transformation for outcomes was picked up by Sidharth Gupta, Co-founder, Treebo, which is raising the bar on quality hotel experience at affordable rates in 61 cities in India: “we use technology extensively in quality assurance because that is the key component that we must deliver as a hotel brand, as a hotel chain,” Gupta said. One of the basic things they have done as part of that is to actually create a virtual replica of each and every one of their hotels in the so-called digital world.

This helps Gupta keep track of anything that might impact the quality of the stay for any guest in any Treebo hotel. From wifi to water temperature in the bathroom, every small, but important, detail is part of this virtual replica.

So, there is a combination of both IoT and some amount of manual feedback, and if one of the sources of feedback shows for instance that the water isn’t getting heated in a given room, in a particular hotel at a specific location, for example, that data is registered on Treebo’s backend systems. This information flow is automated, which gives Treebo the ability to take proactive action.

“I can put that room on stop sell, it will not be sold to the next customer,” Gupta said. While that is one example, the systematic collection and processing of relevant data in an automated manner means that quality aspects can be measured accurately, and benchmarks can be set and met. “It ensures that guests will not face disasters,” he added.

At Qwikcilver, Pratap TP and his co-founder started out thinking they would be building a business-to-business cloud software company, with the now well-established tech-platform-as-a-service model. They wanted to popularise electronic gift cards, businesses engage with their end consumers in this novel way.

Little did they realise that they would have to roll up their sleeves and get into everything from ways of “driving sales” for their customers to figuring out optimal warehousing solutions, Pratap recalls. Not to mention working with the central banker, the Reserve Bank of India, in figuring out what regulations applied and ensuring compliance of those rules.

The effort paid off, however, making Qwikcilver one of the few really profitable cloud software startups in India, with customers across verticals – from Amazon’s Indian unit to the Tata Group.

The need to tackle multiple demands also resonated with Biren Ghose, (Country Head (India), Technicolor), Image resolution, for instance has moved from SD to HD to 1K to 2K and now 4K, and soon “the next K will come around,” he pointed out. Therefore, even within the same project in the same location with the same people, the toolset, the technology, the specifications change dramatically, he said.

The big-picture was eloquently summarised by Debi Mishra, director and head of engineering technology and machine learning at Microsoft India: “Today, the transformation isn’t just possible to achieve by large corporations such as a General Electric or General Motors, but by young startups as well,” he said.

Further digital transformation isn’t just CEO-talk or a CTO’s agenda, but at the information worker’s level, affecting every employee down to their emails and chat conversations, documentation and calendar scheduling, he pointed out.

“And on another dimension, it’s not just being applied in building hi-tech or high-end solu-tions, but it’s being used in farming, in irrigation … it's becoming as pervasive.”

Tweets by @forbesindia
Ten interesting things that we read this week
Wealth, narcissism, and leadership