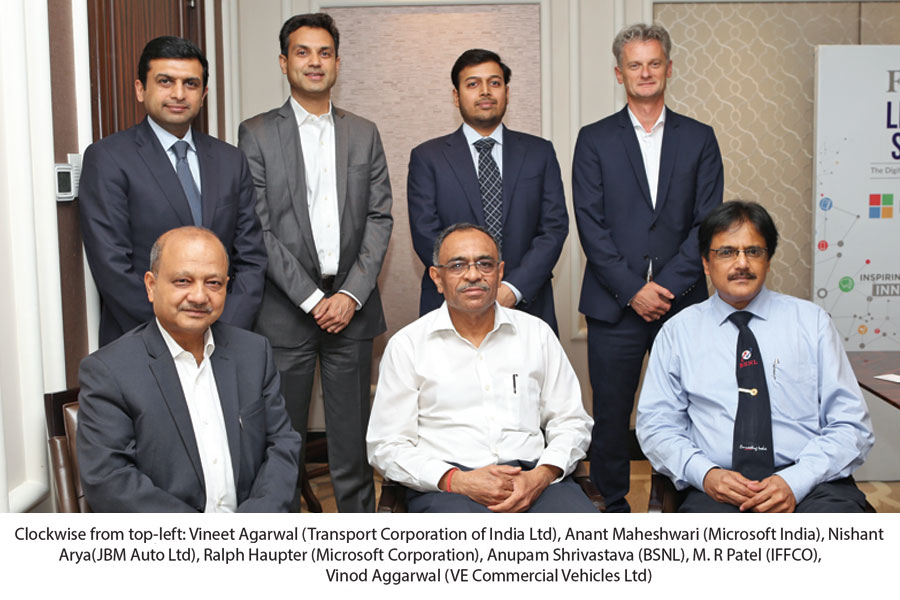 State-owned telecommunications company BSNL was once implementing a project in a far-flung rural area close to Ajmer in Rajasthan, which involved the laying of optic fiber cable. A young village boy, dressed in tattered clothes, a few shirt-buttons missing, looked on intrigued. When a company official asked the boy if he knew what was going on, the boy simply replied: “Yes, I do. Now I can use Facebook and make more friends.”
This is the extent to which digital technologies have become ubiquitous in India. Just like our social interactions, digital transformation has pervaded every aspect of doing business in India as well. And it isn’t just the e-commerce companies that stand to benefit from increasing adoption of digital tools. Leading companies from the core manufacturing sector, logistics services, telecom and communications sector, etc. are embracing a digital transformation agenda wholeheartedly to remain relevant and competitive.

The first roundtable discussion with which the second season of Forbes India LeadersSpeak – the Digital Transformation Series, powered by Microsoft, commenced in Delhi provided ample food for thought vis-a-vis the power of digitalization. The deliberations revolved around understanding how digital is an enabler of manufacturing businesses, how is it disrupting some of these businesses and what companies in these domains can do to stay current with the times.

Advantage India
The discussion began with Haupter offering an ‘outside-in’ perspective on how ‘digital ready’ Indian companies are, in comparison to their global peers. He believed that India would be ahead of many other countries in its digital transformation journey due to the Indian developers’ capacity to build software and applications. Also, India’s size and magnitude put it in a unique position in terms of the amount of data generated. “If you consider these two factors,” he concluded, “I am looking at this market really driving digital transformation.”

Bringing an ‘inside-in' perspective to the table, Anant Maheshwari observed that mindsets are changing. He pointed out that today, people are more ready to store their information and data on the cloud. There is a growing confidence in the ability of cloud companies to keep information secure. “It’s all about data and information and what one can do with it,” he said. “There is much more awareness of the value that exists in data.”

Digital Connect
On the subject of internet connectivity, Anupam Shrivastava opined that connectivity in India was still an issue, especially in rural India, where 70 percent of its population lives. Although connectivity has improved, it is still the biggest challenge in the rural areas. “Both BSNL and the government of India are focused on providing solutions. Bharat Net, our project which aims to connect 250,000 Gram Panchayats in the country using optical fiber technology is very ambitious. In fact, I don’t find any parallel to it anywhere in the world. Digital infrastructure in India is being built up and I believe it will truly transform India,” Shrivastava said.

Patel, however, had a different experience with respect to connectivity. He explained that with more telecommunication companies entering the fray, connectivity wasn’t an issue anymore. “Even we have remote stores and today we are able to execute online billing, online invoicing and other activities,” he shared.

Enabling Value-Addition
Patel explained further that IFFCO has a database of 1.5 crore farmers to whom it sends various relevant messages, on issues like the weather, fertilizers, crop diseases and prices through its IFFCO app and IFFCO Bazar app. “We provide a lot of valuable data to the farmers and now they are able to use it. We have call centers though which we initiate over 1 million communications a year to farmers,” he said.

Aggarwal of VE Commercial Vehicles stated that digitization was impacting every facet of his business, right from design to manufacturing and supply chains, to customers, sales and marketing. “If we have to retain customers or compete effectively, we have to constantly minimize costs for them and digitization plays a very important role in managing the costs,” he explained. “With Internet of Things and telematics, we can achieve better fuel management, more efficient trips and improved uptimes. All these have led to a considerable reduction in cost for consumers,” said Aggarwal.

Adopting Innovation
Moving to the subject of disruption, Agarwal of TCI said that, often, external pressures were instrumental in making companies contemplate embracing changes visible around them. Illustrating the innovative approach taken by his company, Agarwal elaborated that TCI had a mandate from its board of directors to invest in promising startups in the field of logistics. “That gives us a deal pipeline, which lets us see how we can actually adopt certain new things that are coming up,” Agarwal says.

Explaining how digitalization has progressively been permeating the auto component manufacturing sector, Nishant Arya said, that robotics and automation were progressively replacing manual processes for some time now. “Now we are focusing on machine-to-machine learning and Internet of Thinigs. Information and communication are the two key areas of essence. We are trying to capture these in our businesses,” se said.

Adopting Digitalization
While the need to go digital is felt across companies, organisation still find it a challenge to convert legacy mindsets and get employees, especially the older ones, to adapt to the new reality. “If an individual with a larger vision for the organization is able to appreciate what digitalization can do for the company, the process becomes easier,” Arya explained. Aggarwal added that the attitude of the top management of a company towards digitalization was most important, since if the agenda is pushed through from the top, it was likely to be implemented more successfully.

Cyber Security
But just like new-age digital technologies bring benefits, they also bring risks. And perhaps the biggest of these red herrings is cyber security. Shrivastava stated that his company had already invested Rs100 crore to strengthen its digital security system. “This has to be the top priority in the country as a whole. It’s like putting a lock on your house; it has to be as strong as possible,” Shrivastava said. Maheshwari of Microsoft agreed: “Somebody famously said that there are only two types of companies, the ones who know they are hacked and the ones who don’t know that they are hacked. Research suggests that the average time taken to discover a (cyber) threat is 220 days after it happens.”

Tweets by @forbesindia
Products that don't use AI or machine learning will die a natural death: Manish Singhal
How can we create an economics of hope?