Botticelli vs Basquiat: Auction houses pull out the big guns to conquer the art market

Sandro Botticelli and Jean-Michel Basquiat are separated by more than five centuries, but both will be among the stars of winter's cultural calendar 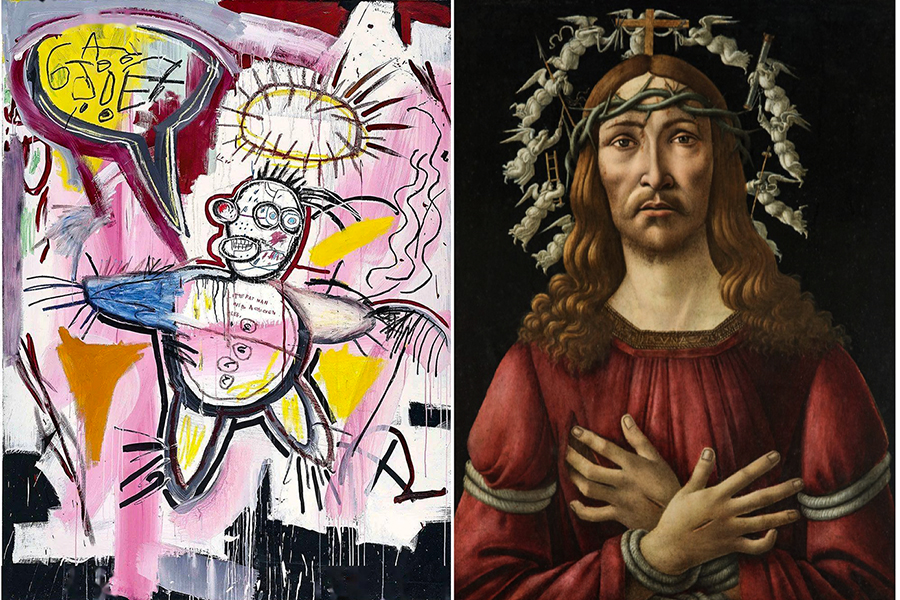 Donut Revenge" by Jean-Michel Basquiat and "The Man of Sorrows" by Sandro Botticelli are both coming up for auction.
Image: Courtesy of Christie's and Sotheby's

Collectors will be spoiled for choice this winter when artworks from two major names go under the hammer. Sotheby's is set to auction "The Man of Sorrows" in January, one of the last late period works by Botticelli to remain in private hands. Meanwhile, rival auction house Christie's is banking on several Basquiat paintings to draw in art lovers.

More than five centuries separate the two artists, but both will be among the stars of winter's cultural calendar. Sandro Botticelli and Jean-Michel Basquiat will soon be honored with major sales at Sotheby's and Christie's.
,

A painting by the Renaissance master, titled "The Man of Sorrows," will headline Sotheby's next annual "Masters Week" sales series, taking place in January 2022. It was painted in Botticelli's later period, in the late 15th or early 16th century. When creating this portrait of Christ resurrected, the Italian artist adopted a style steeped in Christian symbolism and spirituality. Indeed, at the time, he was greatly influenced by the fanatical Dominican friar, Girolamo Savonarola.

While Botticelli's paintings are extremely rare on the market, those from his later period are even rarer. "The Man of Sorrows" is no exception. During the 19th century, it belonged to a British opera singer, before being sold at auction by her granddaughter in 1963. Since then it has remained in the same private collection, leaving it momentarily for a few months in 2009 to feature in a major Botticelli retrospective at the Städel Museum in Frankfurt.

Christie's estimates that "The Man of Sorrows" could fetch more than $40 million at auction. Bids could quickly rise, however, given the popularity of Botticelli's paintings on the market. One of them, "Young Man holding a Roundel," sold in January for $92.2 million at Sotheby's—a record for the Italian master.

For its part, Christie's is betting on "Basquiat mania" to draw the crowds at its next Hong Kong sale—the "20th and 21st Century Art Evening Sale" in December, where "Donut Revenge" goes under the hammer. Jean-Michel Basquiat made this large-format painting in 1982, a pivotal year, in which the artist said he "made the best paintings ever."

These works are highly popular among collectors, who are often ready to spend astronomical sums to acquire them. One collector paid 323.6 million Hong Kong dollars (about $41.7 million) for "Warrior" at a Christie's auction last March, making this Basquiat painting the most expensive Western artwork ever sold at auction in Asia.

"Donut Revenge" could see similar success when it goes up for auction, December 1. It is estimated at between 140 million and 190 million Hong Kong dollars (approximately $18 million to $24 million). Such sums underscore the auction house's desire to "bring [the artist's] legacy to Asia," according to Elaine Holt, Deputy Chairman and International Director, Christie's Asia Pacific.

"Basquiat's impact and appeal transcends time and geography," she commented. "We are delighted to offer such a significant work in our Hong Kong Evening Sale this autumn and are committed to presenting the most significant artworks by the artist here in Asia."

Tweets by @forbes_india
Air India goes home to Tata: Rs 18,000 crore, 120+ planes, 7000+ airport slots
'Our Olympians are our role models, they will change the sporting culture in the country'