In November, Sotheby's will auction off a rare self-portrait by Frida Kahlo during its "Modern Evening Sale" in New York. A painting that could set multiple new records 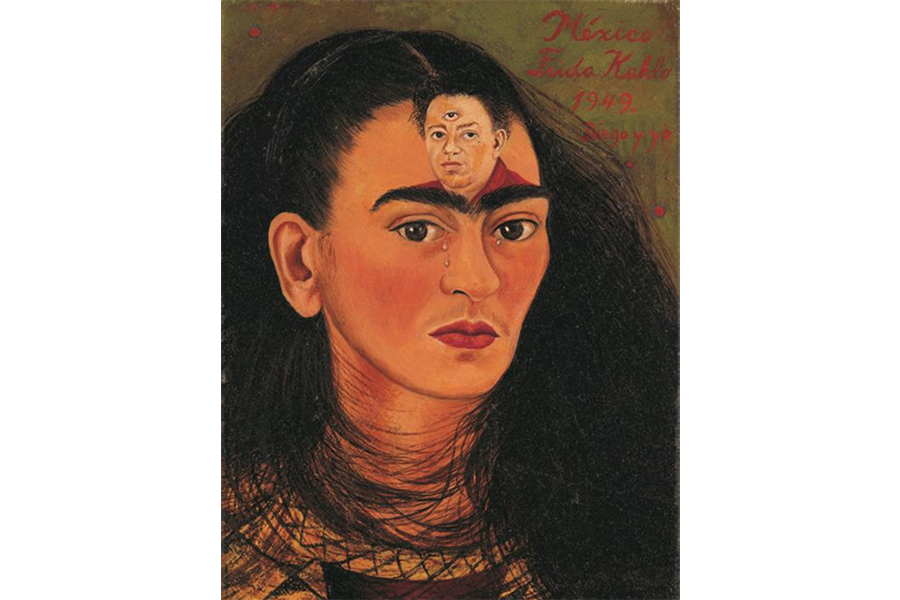 The last 'bust' self-portrait of Frida Kahlo will come to auction in mid-November at Sotheby's.
Image: Courtesy of Sotheby's

No doubt about it: this painting coming to market is a historic work. In November, Sotheby's will auction off a rare self-portrait by Frida Kahlo during its "Modern Evening Sale" in New York. A painting that could set multiple new records.

Frida Kahlo completed "Diego y yo" ("Diego and I") in 1949, five years before her death. The painting depicts the tear-stained face of the Mexican artist, whose forehead is adorned with an image of her companion, muralist Diego Rivera. As Artnet News points out, art historian Gannit Ankori associates the painting with a quote from Frida Kahlo about her relationship with the man she considered the other "accident" in her life. "Within my role, difficult and obscure, of being an ally to an extraordinary being, I have the compensation that a green point has within it a great quantity of red: the compensation of equilibrium," she was quoted as saying in the 1940s.

While "Diego y yo" is a testament to the strong bond between Frida Kahlo and Diego Rivera, it is also the Mexican artist's last 'bust' self-portrait. A characteristic that makes it an exceptional lot in the eyes of Julian Dawes, Co-Head of Impressionist and Modern Art at Sotheby's New York. "When I look at this painting, the phrase 'abre los ojos,' Spanish for 'open your eyes,' immediately comes to mind. In the literal sense, it refers to the penetrating stare of Kahlo as the sitter of the portrait (and the double portrait of Rivera), but I think it also symbolizes the incredible moment this painting will surely usher in for Kahlo, as the market opens its eyes to Kahlo in a new way and secures her place in the auction echelon she belongs."

Fridamania on the auction block

"Diego y yo" will be put up for sale for the first time in over 30 years this November, at Sotheby's great "Modern Evening Sale." The auction house estimates that it will be sold for more than 30 million dollars. An impressive sum that could set a new auction record for Frida Kahlo. The record is currently set at $8 million  following the sale of "Dos Desnudos en el Bosque (La Tierra Misma)" at Christie's in 2016.

And that's not all. "Diego y yo" could also become the most expensive piece of Latin American art ever sold at auction, potentially even approaching the record for a painting by a female artist. It may indeed surpass the $44.4 million that Georgia O'Keeffe's "Jimson Weed/White Flower No. 1" fetched at Sotheby's in 2014.

The popularity of Frida Kahlo works in the market has been growing for several years and has even been referred to as "Fridamania."  "Fridamania shows no signs of relenting," Graham W. J. Beal, director of the Detroit Institute of Arts, told the New York Times in 2015. Six years later, that remark is more relevant than ever.

Tweets by @forbesindia
Firmly in the Saddle: How Shadowfax emerged as the lord of the on-demand delivery marketplace for enterprises
Billie Eilish, BTS, Elton John unite to raise awareness for climate change, vaccine equity