The theatre community, based on the fundamental ethos of human gatherings, is faced with uncertainty in a world of social distancing 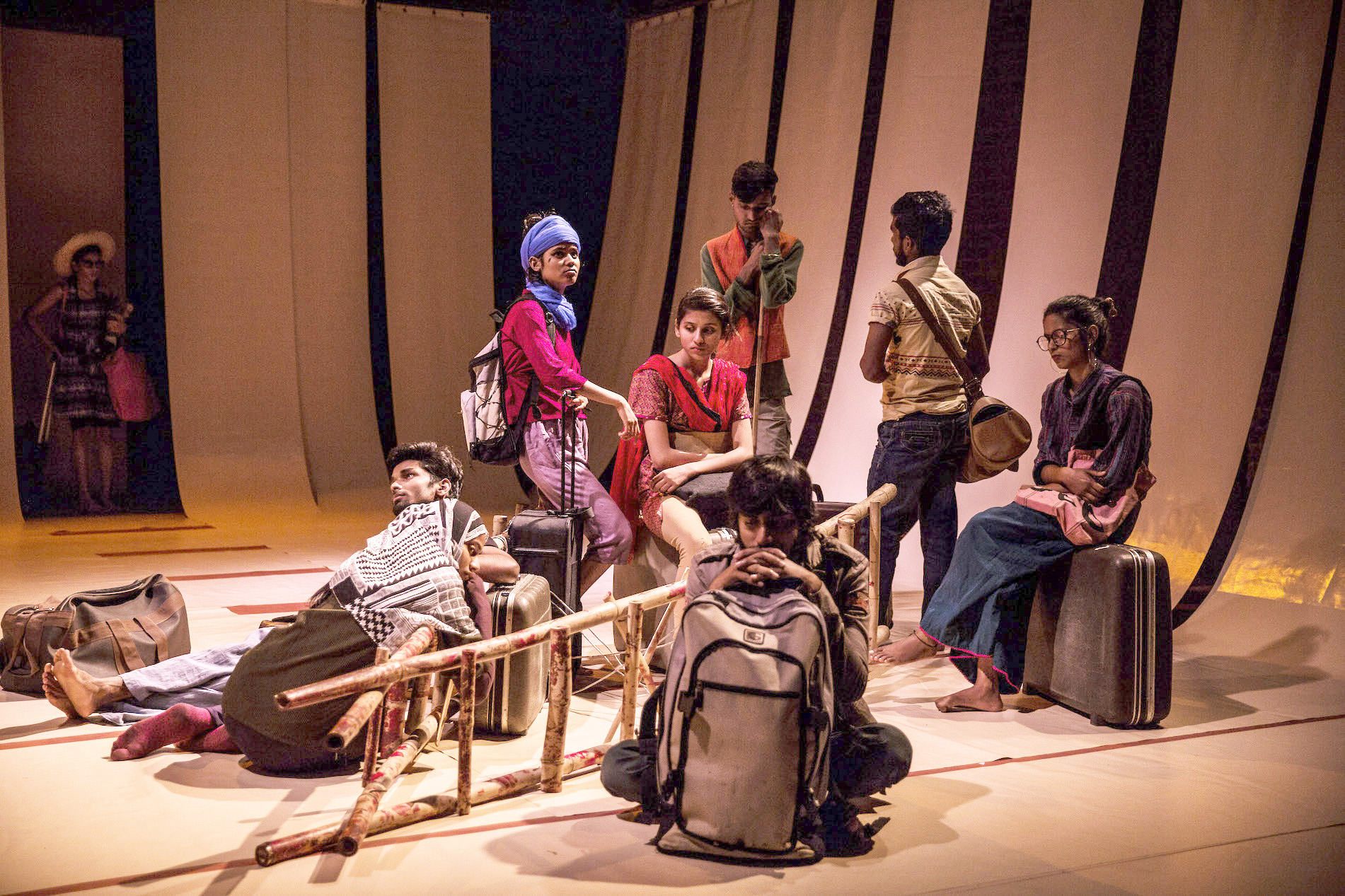 Like everything else, the world of creative arts has taken a hit in an economy brought to a standstill by attempts to contain the spread of the novel coronavirus, including strict lockdown measures nationwide. For some, this might take on the guise of an extended sabbatical, with books and charms at hand’s reach, while for others, it is nothing short of cataclysmic.

The theatre ecosystem in India is a microcosm of society. It is far from monolithic, with people from vastly different backgrounds coming together to participate in models of artistic collaboration that range from the hierarchical to the egalitarian, with a skew towards liberal values. These differences have perhaps never been more in evidence than now, when the cultural landscape reveals a spectrum of maladies. One group for whom this strikes particularly close to home is the Delhi-based Aagaaz Theatre Trust, a community-driven collective founded by Sanyukta Saha with young Muslims from Nizamuddin Basti, an epicentre of the pandemic. They have created plays like the critically acclaimed Bhagi Hui Ladkiyan, on young girls coming into their own despite their conservative surroundings, and Rihla, a take on how the disenfranchised youth might claim a notional country for themselves. The lockdown has put a halt to Aagaaz’s activities—which partly sustains the livelihoods of its repertory members—and has also brought it to the edge of an existential precipice. On the surface, they’ve regrouped with the help of technology, like many other theatre companies. While video conferencing was a non-starter, given connectivity issues in the area, they’ve settled on a system of synchronised voice notes over WhatsApp. Checking in with each other has provided some succour at a time of imposed severance. “For the girls especially, the group was a safe space that gave them a life away from their cloistered homes,” explains Saha. “Now, all of them are voicing their fears and anxieties about this time, and the uncertainty clouding Aagaaz’s future.” The prognosis is clear: Cultural spaces are likely to remain closed for the rest of the year. The actors have also been caught up in the maelstrom of events surrounding the Tablighi Jamaat in March. In mid-April, Aagaaz launched a drive that raised funds to support the families—eight households in all—of their repertory members for two months. “It has bought us time, but going forward, we want this to not be purely charitable, but a means to keep our practice alive,” says Saha. 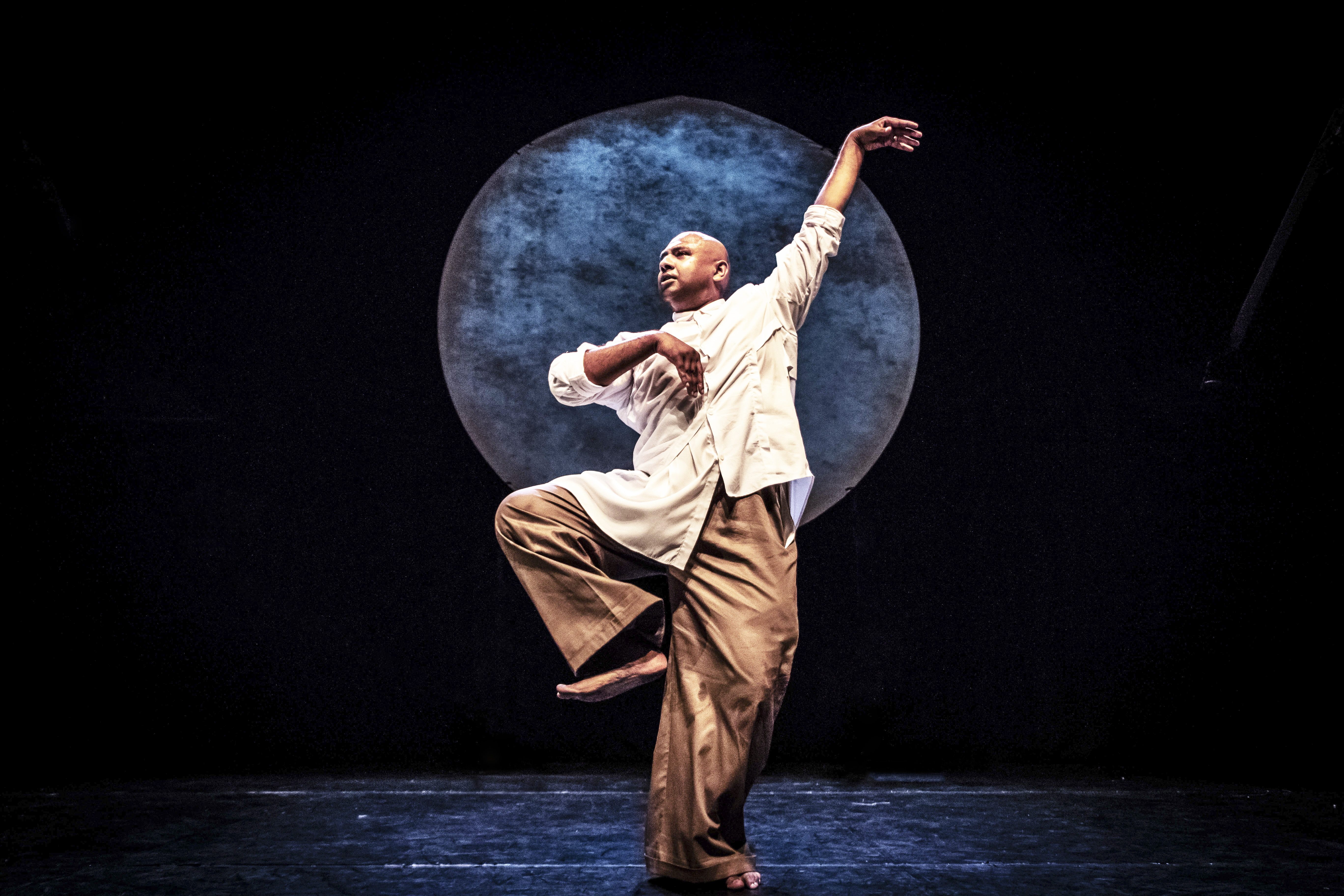 Shane Shambhu in Confessions of a Cockney Temple Dancer
Standing out among the many Covid-19-related crowdfunding campaigns is the Assistance for Disaster Affected Artistes (Adaa), set up by Hindustani classical exponent Shubha Mudgal, among others. In 40 days, Adaa overshot its target of Rs 35 lakh by more than 20 percent, and will support 150 homes for six months, with the beneficiaries selected by groups with a long history of working at the grassroots level—from the Rajasthan-based Pehchaan Lok Sangeet Sansthan and the Manipuri rockband Imphal Talkies to the radical theatre outfit Chennai Kalai Kuzhu. Questions of sustenance have prompted Puducherry’s Indianostrum Théâtre to initiate discussions with theatre groups across the country regarding a financial support system for artistes, along the lines of France’s intermittence du spectacle, a system of compensation designed for professionals who alternate between periods of employment and unemployment. 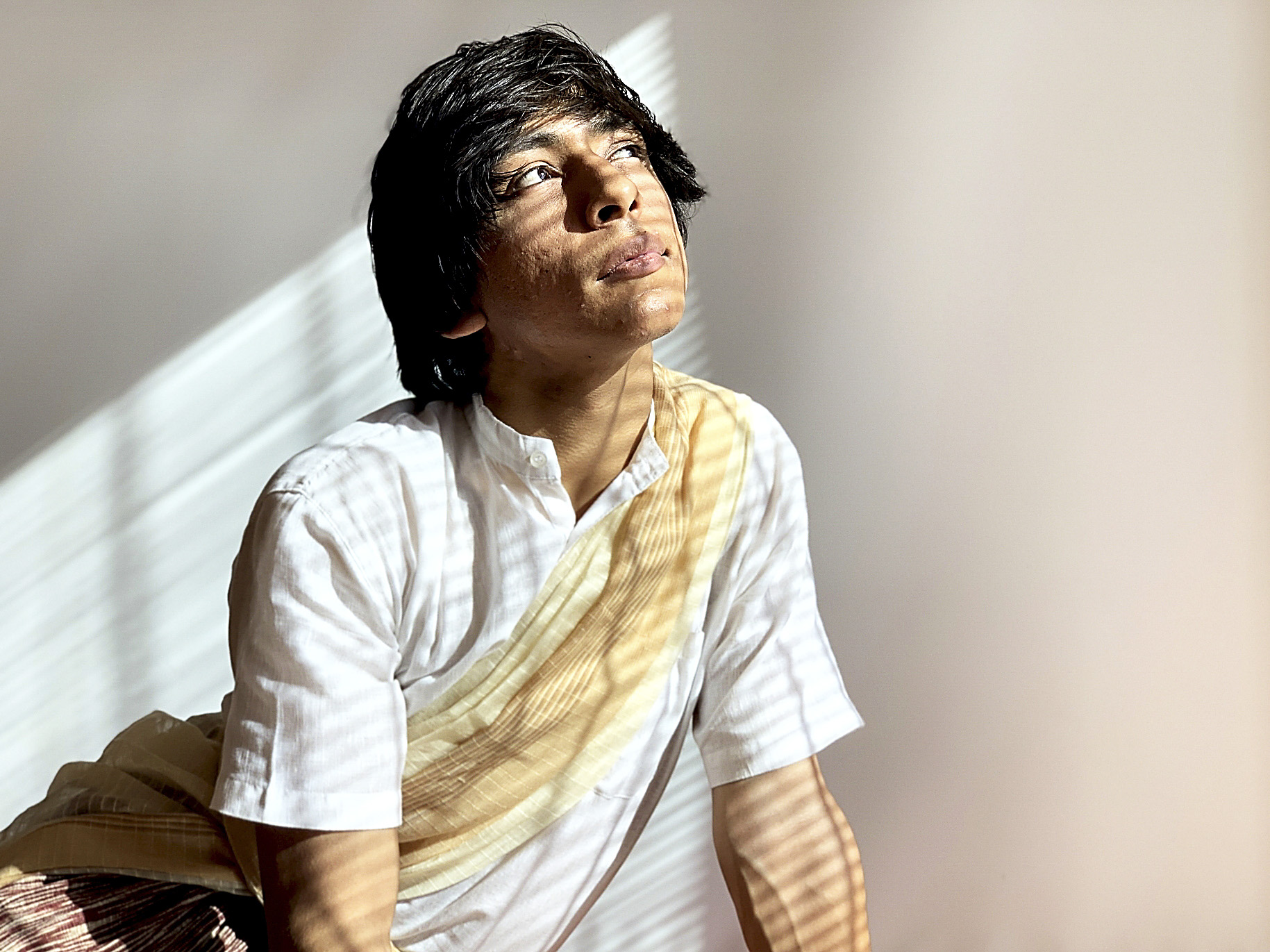 Shubham Chaudhary in Mahesh Dattani’s Snapshots of a Fervid Sunrise

Black Box Okhla (BBO), a three-year-old theatre venue in Delhi, is one of the capital’s upcoming cultural centres. It provides residency support and performing fixtures to experimental projects like Anuradha Kapur’s ambitious Indo-Australian venture Daughters Opera, which opened in January; last November, it hosted the premier and several shows of Rihla, directed by Neel Chaudhuri, and based on the open script, I Want A Country, by Greek playwright Andreas Flourakis.   Very early into the lockdown, BBO created a strong digital presence with an interactive ‘graphic play’ on Instagram, before Mumbai groups like D for Drama and Kommune further opened up the digital domain. BBO followed with exhaustively curated lists of theatre-related digital content and details of grants and commissions. “It is our way of engaging and knowing our audiences better,” says founder Nikhil Mehta. “There’s a lot of talk about just how much content is now available, and what it even means to have theatre online.” BBO is usually closed over the summer, so it wasn’t hit with a slew of cancelled shows like venues with chock-a-block itineraries, but the uncertainty is something it is dealing with head-on as much as any other venue. “We have good days when we feel positive and excited about prospects, but often it is hopeless and confusing,” says Mehta. “I think it’s okay to admit that there is no clarity at the moment.” 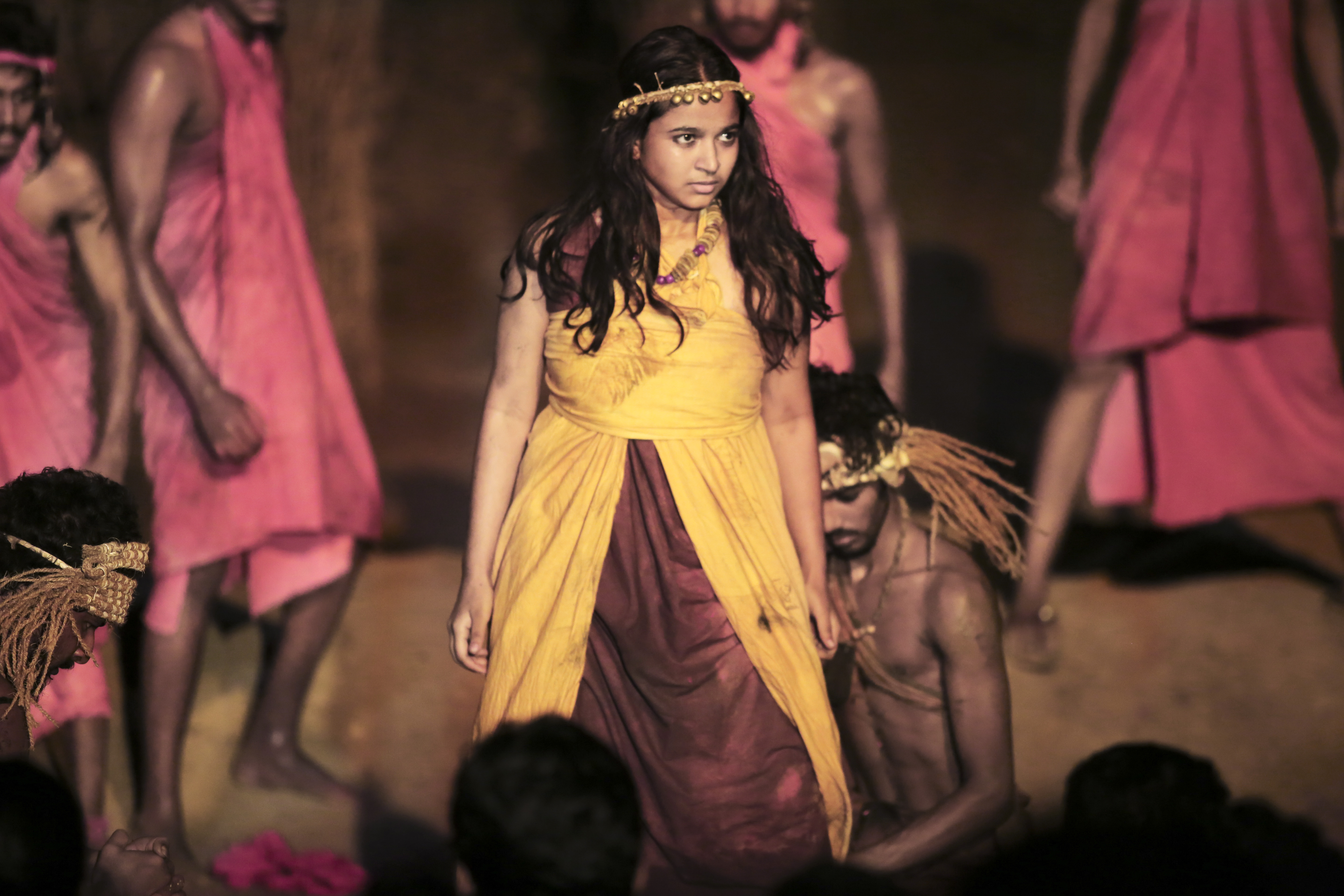 A scene from Sreejit Ramanan’s Misty Mountains of Mahabharata
Grappling with a similar uncertainty is the Mumbai-based QTP, a theatre group that doubles as an events management company. In March, it had to cancel performances of co-founder Quasar Thakore Padamsee’s production of its hit one-man show Every Brilliant Thing with Vivek Madan, as well as abort the India tour of British performer Shane Shambhu’s Confessions of a Cockney Temple Dancer, organised by the British Council. The blueprint to a prospective reopening or ‘going back’ isn’t as forthcoming as one might think. “The lockdown might be relaxed in a tiered fashion, but there’s also the moral question of how do we ask people to come within close proximity of each other in good faith,” explains Padamsee. This call for assembly, with its ethical implications, applies equally to both rehearsals and performances. Logistical parameters, like ensuring social distancing and proper sanitisation procedures, could be figured out—for instance, by selling only a third of tickets perhaps—but getting audiences back would be a hard sell. “This has effectively taken us back 10 years, in terms of audiences, infrastructure and creative manpower,” says Padamsee. The past decade has seen a democratisation of theatre in Mumbai, with scores of alternative spaces setting up a parallel, if fringe, economy of arts practice, while larger venues pushed the envelopes in terms of big-ticket ventures that attracted large audiences. In a post-lockdown risk-averse climate, most of these gains would’ve been frittered away. Months of quarantine might also push audiences towards easily accessible digital content, which Padamsee feels might warrant a drastic change in the content theatre-makers create to win audiences back. “We need to reinvent our idiom, and create a community experience, because I believe it is the live performing arts that will ultimately bring back a culture that relies on social engagements in person,” he says. 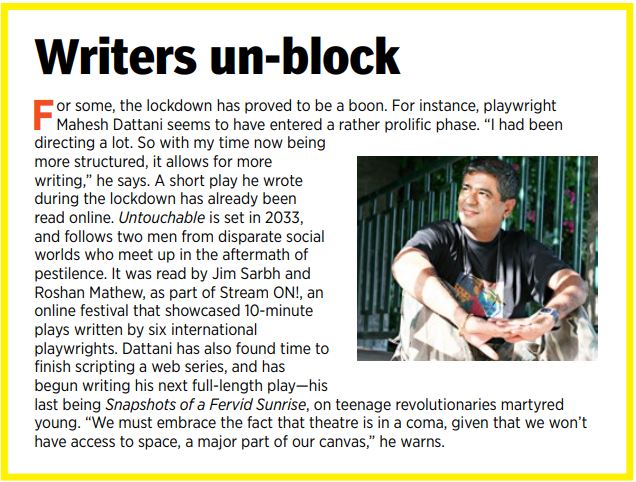 Elsewhere, despite Kerala’s ‘flattening of the curve’, cultural centres there are no closer to reopening than anywhere else. Thinking ahead is Malayalam director Sreejit Ramanan, faculty at the University of Calicut’s School of Drama and Fine Arts in Thrissur. His dream is that of an agriculture-based training model that would help sustain the course and individual practices, monetarily as well as creatively. “Even before the setback, funds for the school were hard to come by,” says Ramanan, whose process for the play, Misty Mountains of Mahabharata, involved his actors working in paddy fields each morning, imbuing them with a natural physicality that worked magnificently with a rendition of the epic set in the veritable outback. Ramanan’s back-to-basics model, in which life is reduced to its essentials, might prove challenging for students not conditioned to privation, self-imposed or otherwise, but this radical scheme does have antecedents in Kerala. The Aranguttukara Pataasala near Palakkad and Ramanan’s former colleague Prabhath Bhaskaran’s Anandam space in Japan, both rely on a ‘farming theatre’ ethos, in which harvest rituals, community kitchens, and an intense physical theatre regime intersect in ways that are complementary to one another. Delhi’s Aagaaz performed the last show of Rihla at Pune’s Yashwantrao Chavan Natyagruha in late February. It was around the time that rioters rampaged in North-West Delhi. Saha remembers the team being perturbed: “We didn’t know whether the riots would reach Nizamuddin; they were fearful about the homes they would return to.” The play, which deals with uprootment and statelessness, therefore acquired a larger-than-life poignancy. The lockdown has, in effect, uprooted Aagaaz’s actors from a way of life they had taken for granted, shutting down the escape route from their usual lives. The safety net of their arts community is suddenly proving to be facile. This might be the case with others in the theatre sector as well, as they step into a period that could see them evolve in order to exist.

Tweets by @forbes_india
Covid-19 economic package: Farmers' turn to get relief
McDonald's details what dining in will look like