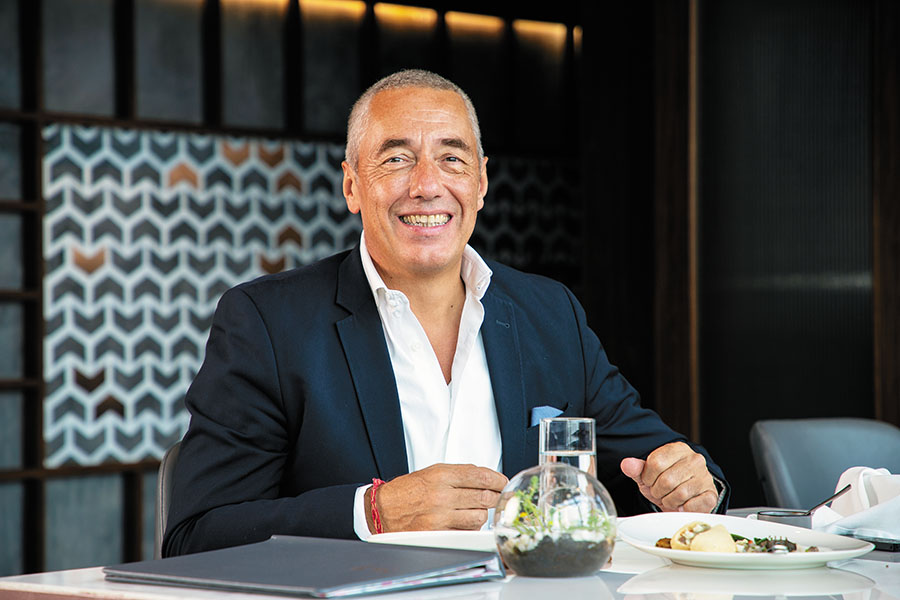 After India, Guillaume Girard-Reydet is now the MD of the liquor company for Espana and Iberia
Image: Bhupinder Singh for Forbes India

It is, ironically, a no-alcohol day in May when I head out to meet and eat with Pernod Ricard’s Guillaume Girard-Reydet at Gurugram’s innovative new restaurant called Together At 12th, sprawled across the top floor of Le Meridien, presenting a bird’s eye view of the green cover that still dots the glass-and-concrete sub-city in bits and pieces.

His India stint has been significant not just for the tremendous growth the company—the world’s second largest wine and spirits seller—has been able to notch up, but also for the fact that he helmed it through a very interesting period in the evolution of the business. India—where taboos around alcohol have always belied strong consumption—has been in the midst of change, with an emergent bar culture and alcohol playing a significant role in socialising for urban millennials. This is what I hope to talk about with Girard-Reydet, who I have known as an affable Indophile quite at home in Delhi’s whimsical society.

Since it is a no alcohol day, mixologist Nitin Tiwari, who helms Together along with young chef Vanshika Bhatia, decides to tempt us with some interesting mocktails. Tiwari, one of India’s leading bar professionals, who has consulted at many restaurants such as The Bombay Canteen, The Olive group and others, pays equal attention to ‘grown up’ non-alcoholic drinks at Together.

It is with some trepidation that we decide on the mocktails, but the kokam and orange (kokam shrub, fresh orange juice, lemon and soda) and the green peas and celery soda (green peas, guava puree, lime, pinch of salt) that are brought to the table are absolutely stunning and refreshing.

Together At 12th is a new restaurant sprawled across the top floor of Le Meridien in Gurugram
Image: Bhupinder Singh for Forbes India


“My wife and I like to try new restaurants, we are very open to experimentation. In fact, she likes to shop at local vegetable markets and very often on weekends, we have small parties for friends where I cook,” Girard-Reydet says. “For a Frenchman, cooking is of course a prerequisite!” he adds with a grin.

It is also a prerequisite while dining with the French that lots of interesting food be ordered for the table! So instead of ordering just a starter apiece, we land up ordering three—because instead of having to choose between these inventive, unusual dishes, my guest suggests we try all.

Bhatia, a Kanpur girl trained at Noma, the Michelin-star restaurant in Copenhagen, Denmark, sends out Kolkata betki tartare with mustard and poppy, a nod at once to French and Bengali cooking; celery root and sweet potato salad that is reminiscent of the roasted sweet potatoes sold on the streets of north India; and prawns in rice crepes, the prawns having been sautéed in kokam. 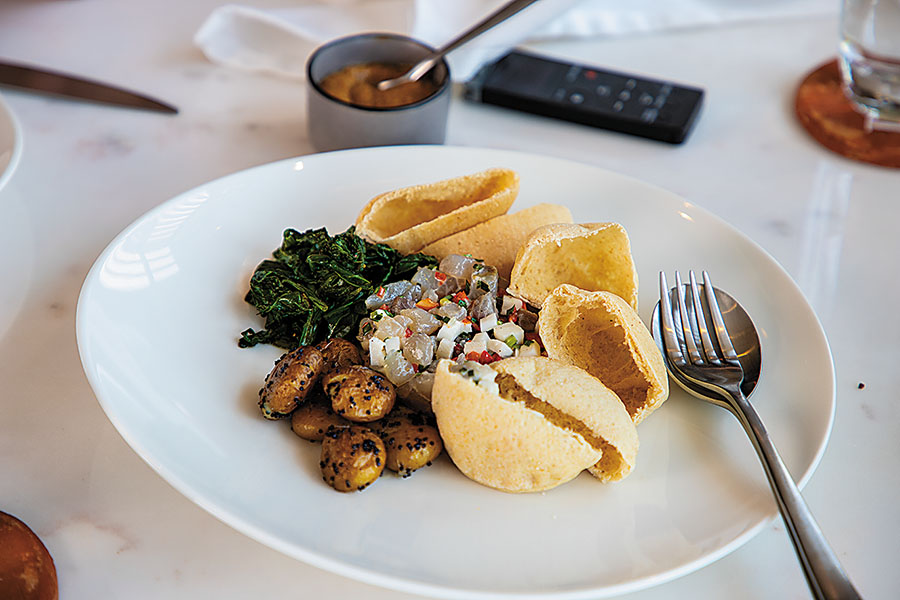 
As we go through these, we get into a discussion on Pernod’s India business. In 2015, Girard-Reydet headed Pernod’s business in Poland and was ensconced in Europe. He was then asked to take charge of India and almost instinctively said yes to the new assignment. The four years that have followed have been a whirlwind of learning about the country, which is the second largest market for the French major internationally, behind the US and ahead of its home market France.

Liquor consumption in India, we discuss, is growing by leaps and bounds instead of stagnating as it has in the US and Europe. There is a strong trend towards premiumisation, as my guest points out, though he adds that if there is Chivas Regal (a brand that a huge number of Indians, at least of a certain generation, readily associate with prestige) in the company’s portfolio, there are also brands like Royal Stag, the semi-premium blended whisky that drive numbers for the company. Pernod Ricard India has nine whiskies and one vodka (Absolut), in its portfolio, all of which are available in the country.

In India, under Girard-Reydet, Pernod posted an impressive revenue jump of 23 percent and an increase in profit by 28 percent in FY18, with whisky as the largest selling category. This was a sharp rise from the year before, when the company posted a sales growth of 6 percent, while profit declined. The challenges in that year were sudden policy changes, such as the highway liquor ban. 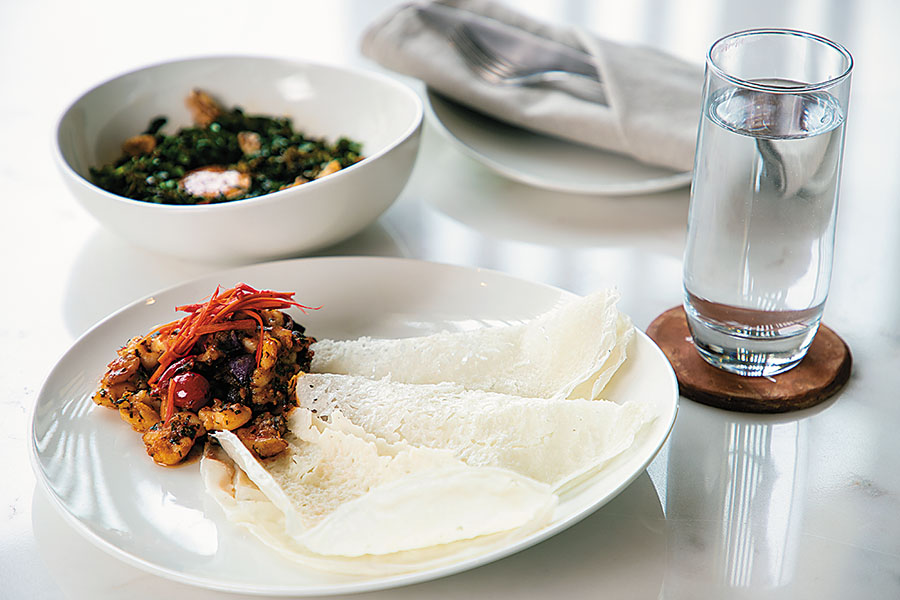 Challenges in a volatile market notwithstanding, Girard-Reydet says the key to the business in the country has not just been empowering managers at various local levels, but also a company ethic where India’s diversity is appreciated. Instead of keeping a highly centralised operation, he navigated the challenge of understanding his markets by constant travelling. “Real India does not just lie in the metros, but in the many small towns that I have been to,” he says.

We start talking about food in these small towns and the diversity of Indian cuisine too. It is fitting therefore that our choice of mains reflect this diversity. Bhatia’s cooking is freewheeling, marrying European techniques with some hyperlocal ingredients, cooking and preservation techniques. My guest, unfamiliar with these, asks for recommendations and I choose pork ribs and belly for him. It comes cooked with a Himachali apple glaze along with the mountainous spice timur (a cousin of the schezwan peppercorn) and with hemp seeds, another tribute to a common Pahari ingredient that most Indian diners remain unaware of.

For my part, I choose a chicken marinated with fermented bamboo, smoked inside a bamboo hollow and served with Manipur black rice. I had fallen in love with its strong flavours when I had first tasted it, and this time too it lives up to expectations. We sample each other’s food and are happy with the choices, except for the lack of wine, so much a part of the French dining tradition.

Wine would have gone well with both these dishes. But today, we must do with sparkling water instead. It does not stop us from talking about it, however. For Girard-Reydet, being from a country where wine is ingrained in the culture of the people, it is a personal passion. He says he has seen the wine market in India grow quite a bit during his stint. “India is a whisky country, but you will find wine culture too growing tremendously. Young people are looking for easy-to-drink quality wines,” he says, as we discuss how with the category of imported wine doubling in the last six years, huge import barriers notwithstanding, the market will be a substantial one in the next decade.

Pernod Ricard globally also owns Jacob’s Creek, the wine most Indians drink when asking for anything imported. In India, the company launched the Campo Viejo wines from the Rioja in Spain and two varietals from Brancott Estate in Marlborough over the last few years.

As we are finishing off the meal, I spot a red sacred thread on my guest’s wrist, associated with Hindu poojas. “Where is that from?” I ask him. “From our office pooja,” he says, and then volunteers, “I know how to do pooja, I can even tell the pandit what to do!” I don’t know whether this is said in jest or earnest, because after all, as an Indophile, Girard-Reydet immersed himself in the culture of the country in a way that all his friends back home will continue to remember.

We finish off with panna cotta and coffee, and my guest leaves without mentioning that he will be ready to take on another country, another market, in just a few months—albeit with learnings from India.