A prolific architect, urbanist and critic curates his top picks for Forbes India, direct from the world's largest design fair

Milan, the design capital of the world, witnesses the highest flux of creative milieu in the spring of each year. At the Salone del Mobile, the world’s largest design fair, prominent design brands, visionaries and studios showcase their annual collections and indulge in new launches, exhibits, parties, pop-ups and cutting-edge installations spread out in the city. About 375,000 attendees from 181 nationalities made it to this year’s edition of Salone (as it is popularly called) at the Rho fairgrounds, held from April 9 to 14.

Here are our picks of the most inventive designs from the mega-fair. Raw Material by Hermès Hermès comes back to La Pilota this year, entrenching itself thick into materiality. Charlotte Macaux Perelman explores materials in their raw state to create branches of dry stone walls as she plots the layout of the exhibition space. Out of this year’s Hermès collection, what has left a mark includes the beautiful bulbous Hecatre and Halo lamps by designers Barber & Osgerby in black granite, and super white Limoges porcelain respectively. The cable is sheathed in velvet cow hide.

The Coulisse is another geometric lamp by designer Tomas Alonso. With the use of materials such as bamboo, Japanese paper screen and copper with an embedded LED source, the delicate assembly is reminiscent of modernist sensibility. The gorgeous throws and plaids showcased are creations of Studio Hermès, which are hand spun, hand woven and hand overdyed cashmere and yak wool. They appear in immersive colours of indigo, mint, charcoal, fuchsia and coral. Interlude by Apparatus The New York-based studio, headed by former fashion designer Gabriel Hendifar and a public relations professional Jeremy Anderson, came about in 2012. Apparatus seems to take a measured approach to pick their material palette –often offbeat in its choices, like with matte python, horsehair and patinated brass. “Things feel modern, but not modern for the sake of being modern,” quips Handifar, who draws creative inspiration from his personal life as a first-generation American born after the Islamic Revolution in Iran.

‘Interlude’ forms part of ‘Apparatus Editions’—a run of limited production, which indulges in craft to produce a suite of furnishings for an ‘imagined modernist concert hall’. Musical references inform the aesthetic and design sensibility of the collection. Interlude uses exotic materials with restraint like alabaster, hand embroidery, Carpathian burl, and eel skin, lending an intricate light and shadow charm to the collection. FAR at Nilufar Depot Nina Yashar is often seen exploring new territories that push the traditional limits of design. This time around, the large exhibition space at the Nilufar Depot gets curated by Valentina Ciuffi and Georgia Cranstoun of Studio Vedèt – a Bologna-based visual identity practice. The project got initiated in 2018 and culminated in April 2019, and attempts to showcase emergent designers in what it describes as a temporary ‘collective of collectives’.

The inflatable installation celebrates the radical trajectory that design undertook in the 20th century in architectural and design disciplines. The materiality of the objects on display is futuristic, with the use of 3D velvety polymers to second skins of silicon and car body sprays, to interact and communicate with the audience in a visceral manner. The exhibit design is by Italian architectural practice Space Caviar. Knoll celebrates Bauhaus The exhibit marks the centenary of the celebrated German school of design, The Bauhaus. Envisaged as a series of four interactive clusters, they encourage the audience to participate in the spirit of the German school’s tenet of ‘Learning by Doing’. Entering the four settings, visitors can have a direct experience of the objects and furnishings that take the leading roles, creating narrative compositions that vary in the experience of each participant. The show is curated by OMA- the celebrated Dutch design studio headed by Rem Koolhaas. The work of icons of design like Marcel Breuer, Mies van der Rohe and Florence Knoll are showcased as three clusters. The fourth cluster offers an analytical look at the legacy of the Bauhaus in contemporary design.

Gae Aulenti’s open house FontanaArte was founded by the creative trio of Gio Ponti, Luigi Fontana and Pietro Chiesa in the year of 1932. At that point, Milan was turning into a design capital of the world with the creative community making the city their home—the home of migrants who had an affinity towards cultural evolution. Gae Aulenti, a provocative Italian architect, became FontanaArte’s art director in the early 80s. She is best known for her project to turn the 1900 Beaux Gare d’Orsay train station, originally designed by Victor Laloux, into a museum of French art: Musée d’Orsay. Her practice oeuvre includes private villas, showrooms for Fiat, pens and watches for Louis Vuitton, shops for Olivetti, amongst others.

This year, FontanaArte’s creative director, Francesco Librizzi, focusses on three individuals from history who have contributed to taking this movement of design and architecture forward. This includes Gio Ponti, Gae Aulenti and Stefano Boeri. Aulenti bought her house in 1973 and reconfigured it to make her residence and studio space via a doorway on top floor. She lived here from 1973 until her death in 2012. This year, they decided to do an open house for Aulenti’s residence, so that the public could experience this culturally rich space. The house is full of eclectic pieces from history—some of which she designed for well-known brands, such as the ‘April’ chairs for Zonatto in 1964; ‘King Sun’ lamps for Kartell in 1967. A limited-edition Roy Lichtenstein carpet tapestry adorns one of her living room walls.       In 2001, a jazz and pop album, Casa, was shot in this house setting, by Ryuichi Sakamoto and Morelenbaum.
Volcanic Ash Tiles from Formafantasma and Dzek The Dutch design studio of Andrea Trimarchi and Simone Farresin collaborates with Dzek (founded by Brent Dzekciorius in London), to focus on original architectural materials and products. Three years of research into using volcanic lava as a building material led to developing the volcanic ash as an ingredient for creating breathtaking surface claddings in hues of caramels, ochres and earth browns. They say that numerous trials resulted in a careful balance of porcelain body and ash glazes at appropriate firing temperatures. 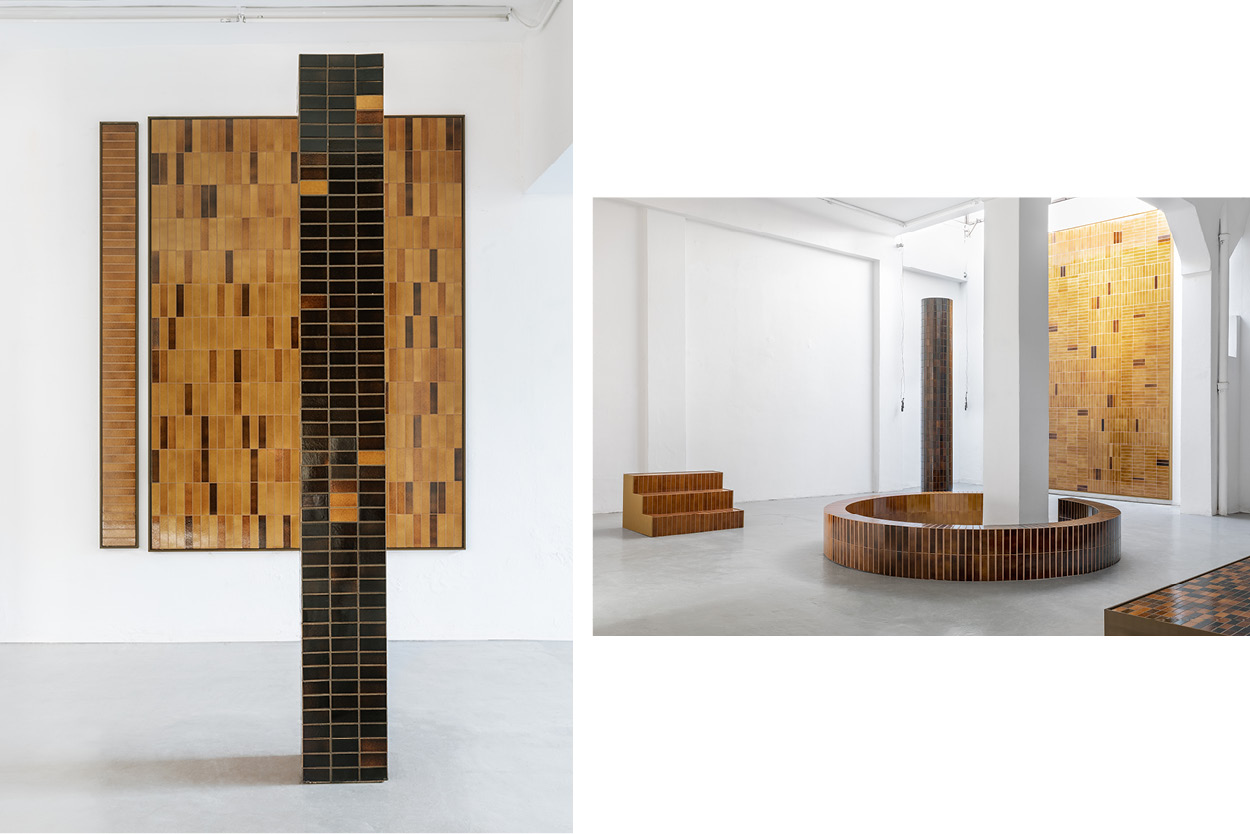 The successful batch of tiles, christened ‘ExCinere’ (‘from the ashes’ in Latin), is available in two sizes and five volcanic glazes. Dzek explains that “These various surfaces are created by mixing varying quantities, particle sizes and densities of volcanic matter, resulting in surfaces that are evocative of the dynamic landscape from which they come.”    Bethan Laura Wood’s Wisteria Sconce Bethan Laura runs a multidisciplinary practice driven by material investigations, artisan collaboration and a peculiar passion for colour and details. Apart from displaying her works at the V&A and Museum of Contemporary Art Tokyo, she has worked alongside Nilufar Gallery since 2011 to create one-off projects. Currently displaying at Spiga 32 as part of the Salone, is this delicate creation called Wisteria Scone. A fair bit of technology and artistic collaborations has resulted in this design, which creates a play of atmospheric shadows. The depictive wisteria petals are individually hand dyed, with gentle curves fabricated in aluminium. The stained glass-like amber of the petals is inspired by the Art Nouveau glass work of Emile Gallé. For the branches, a palette composed with anodising specialist, Neal Feay, includes the soft rose and amber tones found in the changing colour of champagne during the aging process.

The colours grow vibrant as the evening sets in, creating a perfect atmosphere for an intimate evening of champagne. Wisteria sconces are part of a continuing collaboration with Perrier-Jouët, supporting Bethan’s work as part of the ‘Artisan of the Wild’ programme.

Tweets by @forbes_india
Big money, little kids and a grand experiment
Why should you work with a creative star?