The Chinese Wall Around Bangladesh

Two very contrasting scenes along Bangladesh’s western and eastern borders with India show the love-hate relationship between the two countries. The first is a conveyor belt that begins its journey in the beautiful Himalayan terrain along the East Khasi Hills in Meghalaya. It crosses over to Bangladesh, to feed a factory set up by French cement maker Lafarge and Spain’s Cementos Molins.

The second is the Petropole-Benapole border crossing, where hundreds of trucks carrying merchandise, including medicines, wait for days to be allowed across the line. Bureaucracy looms large on both sides. They are asked to unload the goods, go through complex paperwork and then reload on the other side. Naturally, smuggling flourishes.
Relations between India and Bangladesh are filled mostly with examples of the second kind. For a country that played a key role in Bangladesh’s independence movement, India has done a pathetic job of cultivating its neighbour. Bangladesh, on its part, has not been able to rise above the petty anti-India sentiment that a vocal minority promotes.
Why is mending fences with Bangladesh important?
One word: China. The communist regime has gone on a charm offensive in South Asia, aiming to surround India with its sphere of economic and strategic influence. “China is trying to gain strategic regional supremacy,” says political researcher Sandeep Bharadwaj, of New Delhi-based Institute of Peace & Conflict Studies. For a country that refused to recognise the formation of Bangladesh for four years and used its first veto in the United Nations to block the new nation’s admission in 1972, this is a smart turnaround.
But now is the best time for India to regain the initiative in Bangladesh. A friendly government headed by Sheikh Hasina has taken over. Analysts on both sides expect bilateral relations to gain traction now, but only if our bureaucrats allow that to happen. “Our bureaucracy thinks they should be our satellite country,” says Bharadwaj. This approach isn’t just immature; it’s also counter-productive if India’s aim is to win back lost goodwill and protect its sphere of influence. 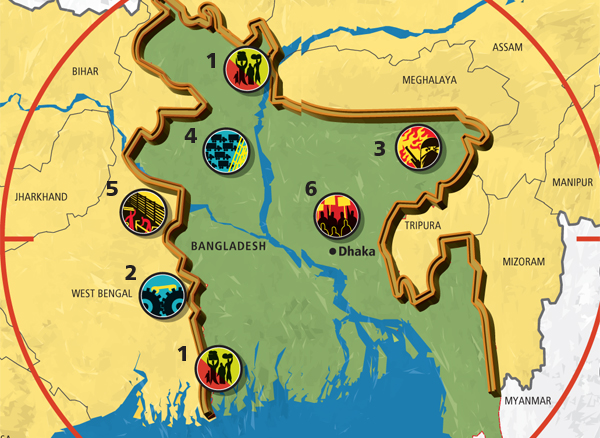 1) EASY COME, HARDLY GO
For the poor in Bangladesh looking for some way out of their misery, the border with India is just an academic notion. At least two crore Bangladeshis live in the country illegally. One in 20 Bangladeshis who comes to India with a visa doesn’t return.

2) COME TOMORROW FOR TRADE
It is not easy exporting goods from one country to the other. Both India and Bangladesh have amassed so much bureaucracy that it takes more than a week for a truck-load of goods to cross the border either way. Corruption and smuggling thrive.

3) SCHOOL OF TERROR
Bangladesh is home to at least 140 terrorist training camps. The Harkat-ul-Jihad-al-Islami, with links to al-Qaeda and Pakistani elements, deserves special mention. Sheikh Hasina has promised she won’t let her nation be a base for terror against India.

4) INVEST AND BE DAMNED
India’s ban on investment from Pakistan continued to apply on Bangladesh even after her freedom in 1971. The anomaly was corrected only last year. Of late, things have become tough for Indian firms in Bangladesh too.

5) QUARREL FOREVER
When India proposed a free trade agreement to help soften the trade imbalance, Bangladesh rejected it. The two countries just can’t agree on providing international transit to each other either. Water sharing is jinxed. Territorial disputes? Don’t even ask.

6) INDIA, MY FAVOURITE VILLAIN
For some politicians in Bangladesh, India is to blame if their pet falls sick. Sadly, some citizens believe them. A vocal minority has built its political relevance on an anti-India platform, which makes it difficult for India to improve relations with Bangladesh.

(This story appears in the 19 June, 2009 issue of Forbes India. To visit our Archives, click here.)