Harish Thawani: My company's motto - Find a way to do things faster & better 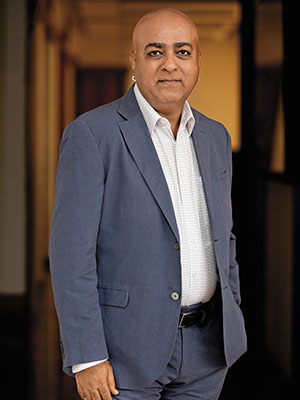 Image: Prasad Gori for Forbes India
Harish Thawani is the founder and chairman of Nimbus Communications. After working in advertising, he began selling sponsorship for hit TV shows like Superhit Muqabla and Fauji before focusing on sports with the 1992 Cricket World Cup. He built Neo Sports from scratch in three months and managed to bag BCCI’s TV rights in 2006 to successfully challenge ESPNStar. He lives in Mumbai and is an avid golfer. He’s a big fan of a Tiger Woods, Steve Waugh and Bayern Munich

The old lesson from david ogilvy that we all learnt was if you can be your client’s best friend, you’ll have the client for life. So, it’s a good sign when a client is calling you on a weekend  for advice on a family crisis. It shows how deeply he trusts you. Trust is at the core of all interaction, business or otherwise. Among my first customers was Brooke Bond and the head of marketing  was Sanjib Chaudhuri. This was 20 years ago before faxes and mobile phones—cold calling meant typing out letters and asking for a meeting. What is now Whitefield in Bangalore was a village and Brooke Bond was the only building for miles around.


They even had a three-digit phone number because it was a village exchange. To get through to Uma, the secretary, was a pain because phones didn’t work well and a call cost Rs 30 a minute—today that would be equivalent to Rs 1,000 a minute. Perhaps the single largest expense in the company was long distance phone calls, even more than salaries! I was selling TV programming sponsorship and Sanjib asked me to meet him. It was a show called Fauji, which launched Shah Rukh Khan, but we didn’t realise then that he would be such a superstar.

I wanted Rs 30 lakh in sponsorship. He said he didn’t have the budget but would be happy co-sponsoring it at Rs 15 lakh. Back then, all payments were in instalments per episode. He made me an offer that startled me. “What if I write you a cheque right now for Rs 13 lakh, all up front?”

This was 1989: The cost of that money would be at least Rs 4-5 crore today. I told myself we could launch three new shows with that Rs 13 lakh, so the multiplier was huge—the total capital in my business was just Rs 50,000. I’ve never seen a cheque that big. How could he trust me? A guy whose office he’s never seen, who’s home he’s never been to—I could be just some scamster. No contract, just a letter.

Over lunch, he read my expression and said to me, “You’re asking yourself how come I’m giving you such a big advance?” He said that every transaction is finally constructed on trust. Even a contract is based on trust. He trusted me to deliver and he knew the big cheque would motivate us to value him even more as a customer. He said, “To trust somebody, you need to be secure. I am secure. I know you will work hard to repay this trust.” That was the single biggest motivational speech in my life.

Fauji became a sensational hit. Six months later, I went back to them with a clutch of other shows, and this time around they wrote me a cheque of Rs 75 lakh (valued at Rs 20-25 crore today). Same formula: A handshake, a letter and the cheque.

I started viewing the whole world through the prism of trust. What is a brand’s single largest asset? Trust. The moment a brand loses your trust, it has lost you forever. You’ll go and tell your friends about how the brand betrayed your trust. Everything else is secondary. The price and the convenience doesn’t matter if you’ve been to a restaurant and gotten a stomach ache: You won’t go again.

I went to Gillette thereafter and met Sachin Gopal, who was the brand manager then. They paid me in advance for a TV show, which got stuck in production. I flew to Delhi to return the cheque. Their finance guys even cashed it and cut me a new one the following quarter once the production was back on track. It was my gesture that cemented the trust between us.

Our third customer was Pepsi, and Vibha Paul Rishi was their marketing head. I went to sell them the sponsorship of the 1992 Cricket World Cup on TV and their agency JWT (HTA in those days) fought bitterly with her. We had done a couple of TV shows with them and won her trust. She told the agency, “I’m going to do this deal with or without you.” They paid Rs 50 lakh for one of the eight co-sponsor slots. That was their first big entry point into TV sponsorship of cricket. And the rest is history.

Shortly thereafter, we went on to produce and launch a show called Superhit Muqabla on a new network called DD Metro, which nobody wanted to touch because Zee had arrived by then. Vibha liked it and came in as the first sponsor.

That show was No. 1 for six years in a row on Indian television. Trust is a two-way street and you’ve always got to pay back what you’ve been paid.

But keeping someone’s trust is about execution, and that’s something I really see has been done well in the Far East. I went to Hong Kong in 1992 and stayed in a hotel room, which had a view of an empty lot. I went back exactly a year later and the empty lot already had 50 floors built. In India, it would take 10 years.

My friends in the Indian construction industry would say, “Ek slab, ek month”, which means only six floors, including the foundation, would get built in a year. Execution and time-to-market is a huge competitive edge. In 2006, we launched Neo Sports from scratch in three months. A fundamental motto in our company is “find a way to do it faster”. Is there a faster and better way to do this without increasing costs?

When DD Metro got launched, we had a week to start shows. The nature of the industry then was disorganised and last-minute, and you had to have that ferocious ability to execute.

We worked hard to execute faster: There were 250 advertisers on Indian TV those days and we had managed to map out their management structures and get all their office and home numbers so that we could get them at a moment’s notice. Our execution was why we were trusted with big contracts.

We were given the sales contract for the 1994 Four Nations tournament in Sri Lanka literally 48 hours before it began, because the agency that was hired messed up and got fired. We had five hands in the office and we made a profit.

We won the 1999 Cricket World Cup sales contract and TV customised feed contract in the midst of a litigation battle between contractors. The World Cup was less than a week away. We had to generate sales, mount a production and send the crew there in four days.

I remember calling a late night meeting in the office and asking my team if we could pull this off. They said, “This is what we were born for!”

And there was absolute bedlam but we got it done. We hired Navjot Singh Sidhu as a commentator for the first time and had to give him his ticket at the airport. The emphasis on time-to-market execution in India isn’t strong enough and Hong Kong was an eye-opener.

In 2000, we as part of a consortium were pitching for the ICC’s commercial rights for 2000-2007. It was the first time they were issuing an eight-year deal and my partners and I had the ability to execute but inadequate capital.

We knew a guy who represented NewsCorp, who had lost out in the shortlisting race, and he trusted us to deliver. He trusted our execution capabilities. After the shortlist was announced, he sat with us in the restaurant in Paris and in just 30 minutes agreed to recommend to the NewsCorp bosses to back us financially and obtained the go-ahead for $500 million.

Given the short space in which the deal was sewn up between the parties in principle, the element of trust on both sides was vital as there was no time to do detailed contracts at that stage. Everything else becomes secondary to trust.

After successfully winning the contract as part of the consortium and thanks to the backing of NewsCorp, the eight-year execution was pulled off successfully largely due to the trust between the parties.

Which is not to say that I haven’t made my fair share of mistakes. There was a production manager who I was grooming for big things. He violated my trust, took a lot of trade secrets and went over to a competitor.

But I continue to trust people because I’m secured in my capabilities to judge people and I believe that trust begets trust. The lesson I’ve learned is that those who violate your trust, eventually don’t make it to the summit of their professions. Even brands that take shortcuts, don’t make it to the top in the long term.

You would have noticed brands that have got hurt from our industry when the pesti-cola crisis took place. The average consumer stopped trusting aerated drinks and consumption and volumes fell dramatically till consumer trust was regained.

More recently, the suspicion and lack of faith in the IPL brand due to recent incidents have dramatically reduced people’s belief and interest in the tournament. Perhaps, irrevocably so. We’ve been deeply concerned because we own and distribute the IPL’s international TV rights. We’ve had alarm calls  from international customers and Indian sponsors who’ve called up to seek our opinion. At this point, ratings are down a further 13 percent compared to last year, which declined compared to the previous one.

I began with Rs 5,000 and we saw 20 years of growth up until 18 months ago. Multiple small victories built on trust combine to contribute towards a winning culture in an organisation.

Tweets by @forbes_india
Anand Deshpande: My employees asked me, was it my company or our company?
Naveen Tewari: We want to change the world of advertising