John Bird: I hadn't given up and I didn't feel sorry for myself 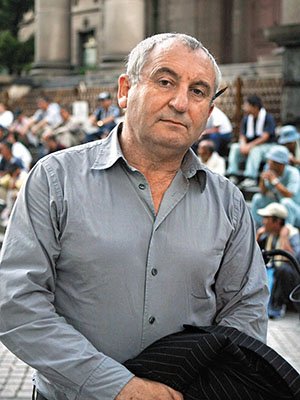 Image: Koichi Kamoshida / Getty Images
John Bird was born into poverty, brought up in care, and has lived through a lot. His life’s journey has included spells as a thief, prison inmate, artist and poet. Now an established iconoclast, activist and publisher, Bird is the force behind The Big Issue, the world’s most successful street magazine. He is an inspirational business leader with an outstanding record of using business as a tool for social change

I was born into an irish family in london after world war II. We lived in Notting Hill in enormous poverty. We had two rooms, it was dirty and drafty. There were rats and flees. We used a toilet on the floor above which we shared with 12 families. We lived two or three miles from the centre of the British Empire, the Houses of Parliament. So there I was, homeless at five, taken into a Catholic orphanage at six. Every day for three years, we were reminded by the nuns that we were social failures. It put me off charity a bit. At 10, when my family got a council house, I came out.

I met Gordon Roddick, who later married Body Shop founder Anita, when I was hiding from the police in Scotland. We became friends.

When I was 45, I re-met Gordon Roddick, who was by now a multimillionaire. I was finding it difficult to settle down. I was psychologically damaged. Unfullfilled, very aggressive.

Mentally and physically, I was an incredibly powerful person. I was able to start a job on Monday morning that finished Thursday night and never go to sleep, which is what I did every fortnight for a publishing house I worked for.

If you said to me I need this in 24 hours and if it meant me printing for 22 hours, I’d do it—so long as there was a profit in it.

I was a walking wounded, but living through it. I hadn’t given up and I didn’t feel sorry for myself.

When Gordon Roddick met me again, he said, “You’re like a time bomb about to go off. You’re tough, you’re ruthless, you’re unsentimental, but you’ve got passion.”

I struggled to contain the demons.

I would go and stay with Gordon for social occasions but after about a day or so he would say, “Can you go now?” I would say, “But you’ve invited me for three days!”

And he would reply, “You just wear me out. You talk all the time about all sorts of stuff that nobody should talk about, you’re very rude to my wife Anita, you’re rude to my children, rude to my friends, and to me. You think you have the answer to everything. If you don’t get yourself something big, something that’s going to wear you out, you’re going to go mad.”

Gordon asked me to start a street paper in London so that we could mop up a lot of people who were living on the streets but not able to earn; there wasn’t anything available for them. He said, “Why don’t you do a feasibility study?” It was 1991, I was 45.

All the people in the homeless world in London were being given something for nothing. They could go to soup kitchens, get a sandwich, get their clothes washed, be entertained, get counselling.  There were 501 homeless organisations in London.

But there was nobody in homelessness, in social business or even in business itself that was giving these people something legitimate to do, a way of making their own money. I came up with this idea of a hand up, not a hand out.

That to me was an entrepreneurial, a Road to Damascus moment, though other people saw it as a social moment. When I suddenly went “wow!” that “wow!” to me was a commercial moment because I thought that these people were in desperate need of legal work; I can produce a product that they can sell and out of that I can create a social business.

So the big event in my life was when I realised there was a hole in the market.

I went to the police and to homeless organisations and told them what I was doing. I talked to hundreds and hundreds of homeless people and said, “Look, I’m going to create the product that you’re going to sell on the streets of London and if it goes well, you’ll make money and we’ll make money.”

I knew that the public would be able to see that these individuals were workers, tradespeople, mini-businesses. If you’re an entrepreneur, you try to develop products or services that are of use to people, are sustainable, and are going to lead to profits and longevity.

I launched the magazine with money from the Body Shop. I started to get together a group of homeless writers, homeless activists; people who would help us distribute the paper. The problem was that they’d been destroyed by the social security system. They knew that everything could be given to them free, and there I was, making them work!

They said one thing, did another, and lived a very chaotic life.

Gradually we got together a very small team of honest and true vendors and then I made many dummies. That was easy. What was most difficult was getting the homeless to sell it.

On launch day we had five people selling, but we had to make it look as though we had 50. We were moving them around for the BBC and TV companies and dressing them differently.

We had to convince the camera teams that we had a really vigorous organisation! We had to do a little bit of cheating; if you talk to a lot of entrepreneurs, they also had to do the same.

The second day we didn’t get any, the third day two or three people started to sell and by the 10th day we had 100 vendors.

By the end of the month, we had 500 selling thousands and thousands because the public could see that this person wasn’t begging, wasn’t asking for something for nothing. They could see our USP.

The sellers were saying, “Read this magazine or newspaper; it will inform you, entertain you, give you some fun. At the same time, you will be giving me a way of earning my own legitimate income, so I don’t have to beg or get involved in prostitution or crime.”

In a short space of time, we had a bestseller, but we grew too quickly. We got carried away.

What grows too quickly takes a long time to fix. So we had to keep reinventing ourselves. We were losing £25,000 a month. After nine months, Gordon Roddick told me, “I’ll give you three more months. If  by three months you haven’t broken even, you’re out the door. I’m not going to give you any more money.”

I cut the staff by 10. I doubled the cost for vendors from 10 to 20 pence. I turned it from a monthly to a fortnightly, went from A3 to A4. I reduced the print cost from 23 pence to 10 pence. I did all sorts of innovations; I didn’t take any advice—I just did it. Twenty-two years later, we still cost 12-13 pence an issue.

On our first anniversary, we’d made a profit of £1,000 a month and ever since then we’ve been quite profitable or broken even and we’ve always paid our way.

Over that first year, we expanded into other cities. We were approached by people in Germany, Italy, France and Russia; all saying, “We have thousands of homeless people who are begging and robbing, who are rent boys and rent girls. We would like to imitate your model.”

We showed them how to do it, we gave them editorial copy, we raised finance for them, and we started to spread the business into Europe. We went to America, we went to the Far East, and now we’re working in India with an orphanage in Delhi called Karm Marg. I visited there a number of years ago.

To help them raise money for the running of the orphanage, they sell The Bag Issue, a readable reusable bag. The bags have been designed by the children at Karm Marg, which gives them a chance to learn about business. The bags are manufactured at the homes of workers in the local village, women who live on subsistence smallholdings and rely on this employment.

Now you can buy a Bag Issue through The Big Issue in the UK, read the bag, go into the supermarket and use it.

We can learn a lot from the most dispossessed people. How do the poorest turn a can of beans into a meal and then into a receptacle for drinking and then maybe into a toy for their children? All this is innovation.

We now turn over about six-and-half million pounds a year. The Big Issue has invested in about 150 businesses in the UK.

In some ways, I think if I was made to be a nice calm reasonable person, I wouldn’t have this intense energy and passion for social justice.

(As told to Rani Singh)

Tweets by @forbesindia
Translating Ideas into Reality
Amish Tripathi: I have enough story ideas to keep myself busy for the next twenty years