Amish Tripathi: I have enough story ideas to keep myself busy for the next twenty years

Author Amish Tripathi’s family background gave him the material for writing his books, while his education and work experience helped him market them 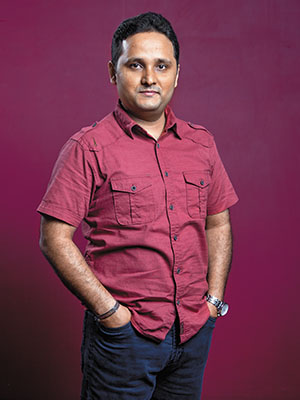 Image: Prasad Gori for Forbes India
After IIM Calcutta, Amish Tripathi spent 14 years in financial services. Around 10 years ago, in his spare time, he began working on a book, which came out in 2010 and quickly hit the bestseller charts. The Immortals of Meluha was followed by The Secret of the Nagas (2011) and The Oath of the Vayuputras (2013). Together, the books are known as the Shiva Trilogy and have sold over 1.7 million copies. Meluha’s film rights were bought by Dharma Productions in 2012, and in 2013 Tripathi landed a r

I grew up in a very religious family: my grandfather was a pandit in Benares and a teacher at the Banaras Hindu University; my parents are very religious. But it is also a very liberal family, which in traditional India is not a contradiction. By ‘liberal’ I mean the ability to accept an opposing point of view, to question. The word ‘Upanishad’ means ‘sitting at the feet of your guru’. You’re supposed to listen to someone and ask questions, because that’s what deepens your understanding. Because we were allowed to ask questions, I understood our philosophies at a much deeper level.

We are a family that is obsessed with knowledge, and I’ve always been a voracious reader. As an author, you need all that knowledge, you have to draw from so many sources. One of my favourite subjects is history.

I come from a middle-class background, so I had to make decisions that would lead to a good job. And there was peer pressure too—you know, if you chose X, people would say, ah, he didn’t have the grades to do Y. So while I was deeply interested in history, I didn’t take it up as a subject. Being a historian in the India that I grew up in was a path to starvation. Doing an MBA was an obvious choice.

I never wanted to be an author. I dreamed I’d be an industrialist; for some time I thought I’d be a scientist. But since I was passionate about history, I kept reading it.

Life followed the path that I thought it would: MBA, fourteen years in financial services. My last job was as national head of marketing and product management at IDBI Federal Life Insurance and a member of the senior management committee.

And like my family background helped me as an author—I already had all this knowledge—my degree, my work experience helped prepare me for the business side of my books.

The Shiva Trilogy began as a philosophical thesis, around nine, ten years ago. My family and I were watching TV, and discovered something interesting: For Indians, gods are devas and demons are asuras; but for the ancient Persians—the pre-Islamic Zoroastrian Persians—gods are ahuras, and demons are daivas. Which triggered an interesting debate: If ancient Indians and Persians had met, they’d probably call each other evil. Who’d be right? The obvious answer is neither; they’re just two different points of view. So, if neither of them is evil, then what is evil? Evil is something that exists beyond this.

An answer occurred to me, partially inspired by what I knew of the Katha Upanishad, but largely my own formulation. I discussed this with my family, and they said it was nice, why don’t you write it down? Which I did. Then, at my family’s prompting, I converted the philosophical thesis into an adventure story, a vehicle to convey that philosophy.

I had written no fiction before that, ever. I first tried to write it in an organised way, which didn’t work. But when I surrendered to the flow and let it emerge, the story started flowing. It took me some five years to write the first book. But before it was released, I had the entire story in mind for the second and third. In my mind, they are not three different books; it is one continuous story divided into three for convenience.

The ideal role model for creative people is Aamir Khan. From all I’ve read of him, when he makes his movies, he makes them with the full courage of conviction. But once he’s finished the movie, he becomes a practical marketer: How do I sell this thing?

You have to work that way. The business part comes once the book is finished, you cannot allow that to interfere when you’re writing. I believe a book is a blessing that has come into an author’s life for some purpose. I was writing for myself and my family, which, I think, is the best way to write.

For six or seven years, I did nothing except work at my job, write the book, and spend time with my family, nothing else. No parties, no television, no time-wasting; writing in the back seat of the car (in Mumbai’s bad traffic, the work commute gave me an hour, hour-and-a-half of writing time). If you want to find time, there is more than enough time.

I didn’t even think I would get published, let alone sell so many copies. Now it all seems like a good ride, but at that point, it was a struggle. I got rejected by every publisher (I stopped counting after twenty rejections). Most of them didn’t tell me why.

One who did said, “Your storytelling skills are good, but you picked a bad topic: It’s a religious book, which won’t do well with the Indian youth, the primary market today, who aren’t into religion; it’s a different interpretation of religion, which older people won’t like; and since it’s in modern easy English, and you don’t want to change the style, the literati won’t like it. You’ve effectively alienated every possible reader segment.”

Finally, my agent, Anuj Bahri, and I quasi-self-published the book. He printed it, through his label, Tara Press, and I invested in the marketing.