With no bullet holes nor removal of tusks, the cause of death has remained a mystery, creating fears among some experts about the future of the mighty mammals in Botswana, where their conservation has largely been a success story 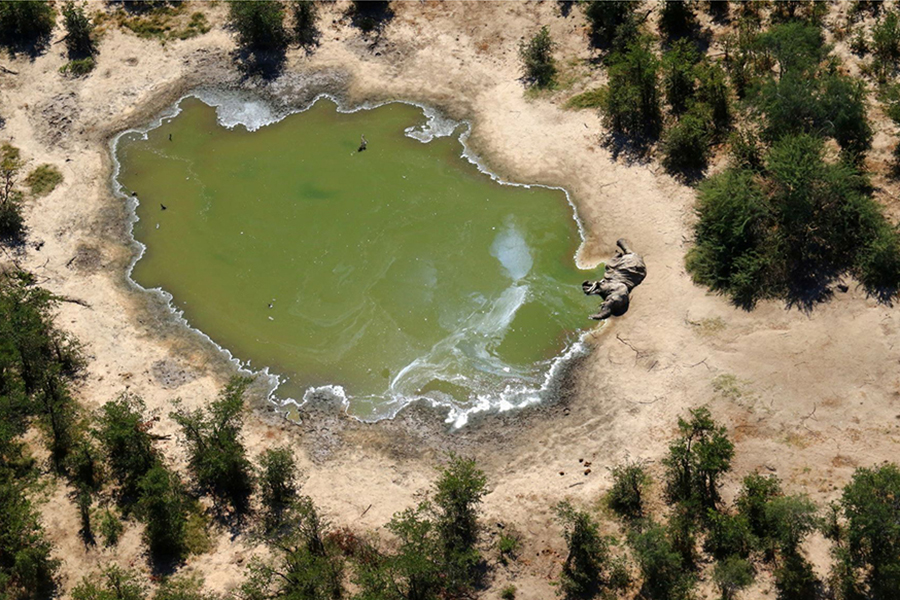 In May and June, conservationists discovered the carcasses of 356 elephants in Botswana’s Okavango Panhandle. Some of the animals appeared to have collapsed and died suddenly, while walking or running. Others seemed disoriented, walking in circles before they died. While the elephant deaths have ceased, their cause has remained a mystery, creating fears among some experts about the future of the mighty mammals in a country where their conservation has largely been a success story. None of the bodies contained bullet holes and no tusks were removed, implying that ivory poachers were not involved. Some experts suspected that poisoning by local people might still be to blame, while others thought something in nature was the most likely explanation. On Monday, Botswanan officials announced their answer: Neurotoxins produced by cyanobacteria, a type of microscopic algae, caused the elephants to die after they drank from large puddles that formed after rains. While some conservationists accepted the explanation, others did not consider the mystery solved and feared that the elephants could again face renewed danger. Cyril Taolo, deputy director of Botswana’s Department of Wildlife and National Parks, announced the government’s findings at a news conference. “There’s absolutely no reason to believe that there was human involvement in these mortalities,” he said. “This is not a phenomenon that was just seen now, it is something that happens quite a lot when there are these environmental changes.” Mmadi Reuben, the government’s principal veterinary officer, added that “there are a lot of questions that still need to be answered,” including why elephants were the only species that died and what caused the deadly outbreak. Some conservationists were also concerned that the government did not disclose the name of the lab that produced the findings, nor did officials reveal how many samples were taken and from where, which tests were performed and which species of cyanobacteria was implicated. Officials did not respond to interview requests. “There’s just so many questions that are outstanding,” said Pieter Kat, director of LionAid, a nonprofit conservation organization, and who has worked extensively in Botswana and researched wildlife diseases there. “They need to be completely transparent about the laboratories the samples were sent to and the lab reports.” Most types of cyanobacteria that produce neurotoxins occur in marine environments, where they can cause red tides. A few species are found in freshwater around the world, and they sometimes kill dogs, cattle and other animals that drink from or swim in contaminated water bodies. “One of the biggest unresolved issues is why there seems not to have been collateral mortality,” said Chris Thouless, head of research at Save the Elephants, an organization based in Kenya. “That is one of the reasons we originally said this was not a probable explanation, because other animals didn’t seem to be dying.” Elephants account for the majority of wildlife in the area, but cattle are also found there, Thouless said. He has not been able to verify, however, whether cattle drink from the same bodies of water used by elephants. That said, he added, “While no suggested cause is a perfect fit to observations, this one is less improbable than the others, so I am inclined to accept it, particularly since this is supported by lab results.” There are several possible explanations for why only elephants died, said Roy Bengis, a veterinary wildlife specialist at the University of Pretoria in South Africa, who formerly served as chief state veterinarian at Kruger National Park. It could be that elephants are “exquisitely sensitive” to whichever particular neurotoxin killed them, whereas other species are more resistant, Bengis said. “We know this happens — different species of animals have different tolerances.” Elephants also drink copious amounts of water, up to 40 gallons a day, so they would be taking in a larger dose of toxin than a smaller animal. Additionally, unlike most other species, elephants “actually go and frolic in the water and roll in the mud and spray themselves,” Bengis said. The neurotoxin might have been absorbed through their skin. Why vultures and other scavengers were not affected is another unanswered question. A neurotoxin would most likely have been concentrated in the elephants’ relatively small and inaccessible brains and spinal cords, making it less likely to be consumed, Bengis said. But not all conservationists are convinced that toxic algae are responsible. “The chance was lost to find out what has really happened to the elephants, because of the government of Botswana’s unwillingness to collaborate with the research community at an early stage,” said Keith Lindsay, a conservation biologist at the Amboseli Trust for Elephants in Kenya. “There remain big questions over whether any useful samples were collected.” Bengis added that without seeing the lab results or knowing more about the samples, “I can’t say yea or nay with regards to whether this diagnosis is correct or incorrect, or possible or impossible.”

Tweets by @forbes_india
Envisioning a future that orbits around digital
Photo of the Day: Is it time for bubble dining?