How Malaysia got in on the secondhand clothing boom

Secondhand clothing is one of the fastest growing sectors in the global fashion marketplace, as consumers seek out affordable, eco-friendly alternatives to fast fashion 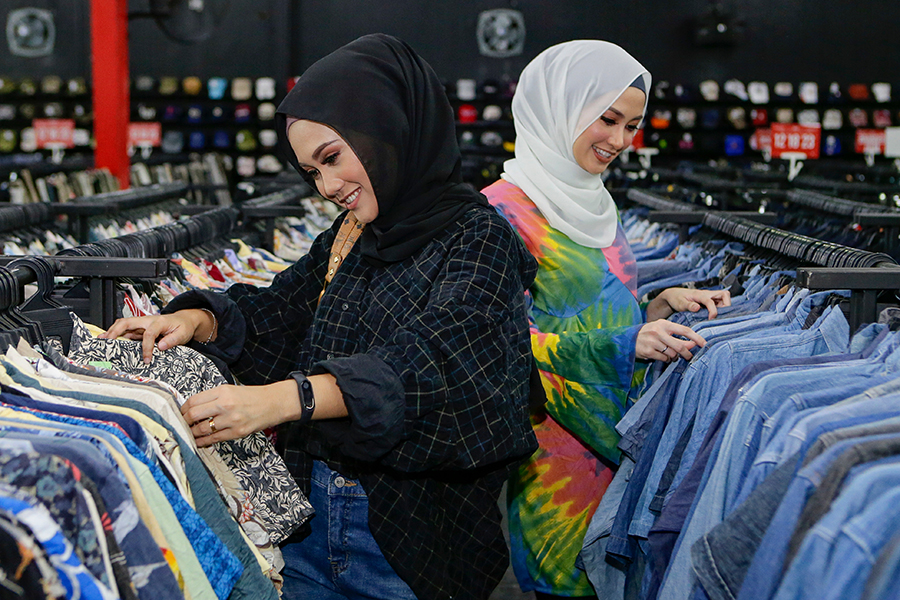 Maybe it was the pandemic, or growing concerns about the environment, or a bit of both, but one thing’s certain: People are doing a lot more secondhand shopping these days.

Secondhand clothing is one of the fastest growing sectors in the global fashion marketplace, as consumers seek out affordable, eco-friendly alternatives to fast fashion. Even celebrities are picking preowned looks for red carpet appearances.

A 2021 report from the resale platform ThredUp and the analytics firm GlobalData projected that used clothing sales would rise to nearly $77 billion by 2025 from $36 billion this year.

Much of that activity is happening online, on resale sites like Etsy, eBay and Grailed. Spend enough time on any of them, and you may find that a surprisingly large number of sellers are operating in South Asia, and Malaysia in particular.

“We’ve all just noticed this, especially when we’re shopping on Etsy,” said Rachel Tashjian, the fashion critic at GQ.

?“I was looking for an Agnès B. cardigan, and all of them were from Malaysia,” said Sarah Brown, a designer for a jewelry company in the New York City borough of Manhattan.

The concentration of Malaysian storefronts has caused some shoppers to wonder: Why?

For the sellers, the answer is obvious: Supply and demand.

Bundles and bundles of discards

Secondhand shopping — also known as “bundle” shopping — is popular in Malaysia. There are thrift stores across the country, ranging from tiny roadside stalls to vast warehouses run by corporate chains. One such company is Jalan Jalan Japan, an importer of Japanese items that operates eight stores in the country, and Family Bundle, a chain with numerous outlets in Kuala Lumpur.

Over the past decade, “there’s been a tremendous rise in doing this kind of shopping, and it’s quite fascinating,” said Naim Azhar, 28, who works at a cybersecurity company in Kuala Lumpur. In 2019, he went viral locally for his luxury fashion bought from thrift stores.

“I spent hours and hours just diving into the pool of unwanted clothes, and I found a lot of cool trench coats, like a Burberry trench coat,” he said in a Zoom interview. Most of his designer finds cost the standard rate for an item of used clothing in the country: 1 ringgit, or about 25 cents. Online, such pieces could easily fetch between $20 and $60 from American secondhand shoppers; rare and collectible items can go for well north of $500. But most Malaysians don’t shop to sell. They do it for the love of clothes.

The term “bundle” refers to the large bales that local merchants buy from wholesalers. “Selam bundle,” which translates as “diving into bundles of clothing,” is used to describe thrift culture.

Amirul Ruslan, 21, a musician in Kuala Lumpur, said in a Zoom interview that Malaysian thrift stores sometimes turn the opening of large bundles into an event. “It’s quite literally one guy climbing on top and tearing it open with a knife, and just like pulling stuff out,” he said, “and people start diving into it, seeing what they like.” He especially loves shops “that don’t have any social media presence, barely have a Google Maps location.”

Recently, Ruslan brought a reporter on a shopping tour, stopping first at a Family Bundle outlet in Kuala Lumpur’s Chinatown. On the racks were Japanese brands like Edwin, as well as Adidas, Nike and Levi’s. The cheapest items cost around $1; the most expensive, $23.

Up next was Ruslan’s favorite roadside stall, Maxstation. Situated in a working-class neighborhood, it consists of four canopy tents with walls made of recycled tarpaulin. A pair of kittens mewed in the corner, and a rabbit sat in a cage on the counter.

Just a few months earlier, Ruslan showed up to the shop to find a crowd gathered outside: Maxstation was burning down.

Its proprietor, Nor Muhamad Mat Nor, 34, is still not sure what happened. “Nobody was in there and there’s no clues from firefighter forensics,” he wrote in a message on WhatsApp. Ultimately, though, the local market is less profitable for him than his business selling designer clothes overseas on Grailed.

“I’m doing this almost 10 years, with passion,” he wrote.

Muhamad got started selling clothing locally after noticing demand for vintage clothing and band T-shirts. He began selling overseas in 2017, and his physical stall followed three years later. Today, he said, he sells about 10-15 items online per month; some of his most profitable sales have been items from Japanese fashion brands: Comme des Garçons, Yohji Yamamoto and Kapital.

Muhamad spends about three hours a day looking for clothes. He buys in bulk from a wholesale outlet that sells bales of clothes from overseas. He prefers American and Japanese clothing, he wrote, “because of the high chance to get the good items.”

After the fire in October, he was able to rebuild, and in December the store reopened. On a reporter’s visit in January, Muhamad wore shorts and a denim apron, ready to open and sort through a handful of wholesale bundles containing 300-400 pieces of clothing each.

“It takes me about an hour to sort out these items. I look at each piece thoroughly, inspecting the threads, the sewing, the zip and if it’s of a valuable brand,” he said, as he cut open a bag and sifted for sartorial gold with the help of his wife, Mariati Muhamad.

“Johnbull, this is a valuable brand from Japan, so this is something I would list online on Grailed,” he said, holding up the label of a vintage leather varsity jacket.

When Muhamad’s store went up in flames, he lost nearly $10,000 worth of merchandise, including a Barbour jacket he’d listed on Grailed for $180 and a Bape jacket, for $590.

“I had sorted all my high-value items to be listed online for sale, so I had them kept in the store,” he said. “But it’s all gone in the fire.”

Do you know where your donation is going?

Most people who donate old clothes assume their garments’ final destination is the racks of Goodwill and Salvation Army, where they might find a second life. However, according to Adam Minter, the author of “Secondhand: Travels in the New Global Garage Sale,” thrift stores are often just the first stop on a circuitous international journey.

“Only about one-third of the stuff that is put on the shelves of an American thrift store actually sells,” said Minter, who has a home in Malaysia but lives in Minnesota. The thrift stores sell the excess clothing to bulk clothing exporters, which then ship it around the world: “Your clothing in Fremont, California, could be sent by truck or rail to Houston, where it’s sorted for Pakistan and India and Malaysia,” he said.

There, sellers can buy them cheaply and list them online. “You buy the bale, you bring it back to the shop, you break it open, and you know, maybe if you’re lucky, there’s a good piece of designer clothing in there that didn’t make it through the screen at the thrift store and the sorting warehouse in Mississauga,” Minter said.

Nowadays, a given clothing item — say, a Nike hoodie — may be made in a factory in Taiwan or Bangladesh, sold to the United States, donated to Goodwill, shipped in a bale to Malaysia, and then sold back to the U.S. on Etsy. It’s simple arbitrage: Buyers in developed countries will pay a lot more for name brands than they cost in the developing world, where wholesalers typically sell huge quantities of merchandise priced by the kilogram.

According to the Observatory for Economic Complexity, which tracks international trade, the largest exporter of used clothing in 2019 (the most recent year for which data is available) was the United States, where exports totaled $720 million. The top importers were Ukraine ($203 million), Pakistan ($189 million), Ghana ($168 million) and Kenya ($165 million). Malaysia’s imports totaled $105 million.

Still, this industry is not without friction. In 2015, Burundi, Kenya, Rwanda, South-Sudan, Tanzania and Uganda jointly announced that they would ban incoming clothing by 2019 in order to protect their homegrown garment industries. The used clothes coming in were just too cheap.

A U.S. trade organization called SMART, the Secondary Materials and Recycled Textiles Association, said the ban on imported clothes could cost 40,000 American jobs and $124 million in exports. In response, the Trump administration threatened to raise tariffs on imports from those countries, and all of them except for Rwanda backed down.

Whether people are able to sell secondhand clothing internationally depends on the state of their country’s shipping logistics.

“Some of the poor countries where you’ll see bales of clothes going in, you know, there just isn’t the infrastructure,” Minter said. “If a bale of clothes ends up in, say, northern Nigeria, and it’s got a really great pair of Levi’s in it, somebody in northern Nigeria is probably not going to try and sell that via Etsy. The logistics aren’t there.”

“But in places like Kenya and in Malaysia,” he continued, “the logistics are there. The familiarity with e-commerce is there. You have a fairly globalized population.”

Minter noted that Malaysia is one of many countries — including Thailand, Indonesia, Ukraine and Latvia — taking part in this trade.

Malaysia, he said, has “a population that’s savvy to global fashion trends and has the disposable income to do this kind of business.” The World Bank projects that Malaysia will transition from a middle- to high-income country in the next two to six years.

The country also has a long history as a manufacturing base for companies like Dell and Intel, which ship huge amounts of products to America. There’s also its proximity to Japan, which exports rare and highly desirable merchandise to the region; most used clothing that ends up in Malaysia comes from Japan originally.

“I’ve noticed a lot of pieces on eBay and Etsy by Vivienne Westwood and Jean Paul Gaultier from Malaysia and Thailand,” Collin James, a founder of the Manhattan vintage store James Veloria, wrote in an email. “Both had a lot of pieces produced solely for the Japanese market in the 1990s and early 2000s with interesting prints and designs that weren’t released for European and American markets.”