Joy in India as Biden and Harris Win, but Questions, Too

Kamala Harris's ancestral village rejoiced on Sunday. But across the country, people wonder what changes the administration will bring, especially in their approach to issues in India such as Kashmir and the CAA-NRC

By Jeffrey Gettleman and Prakash Elumalai 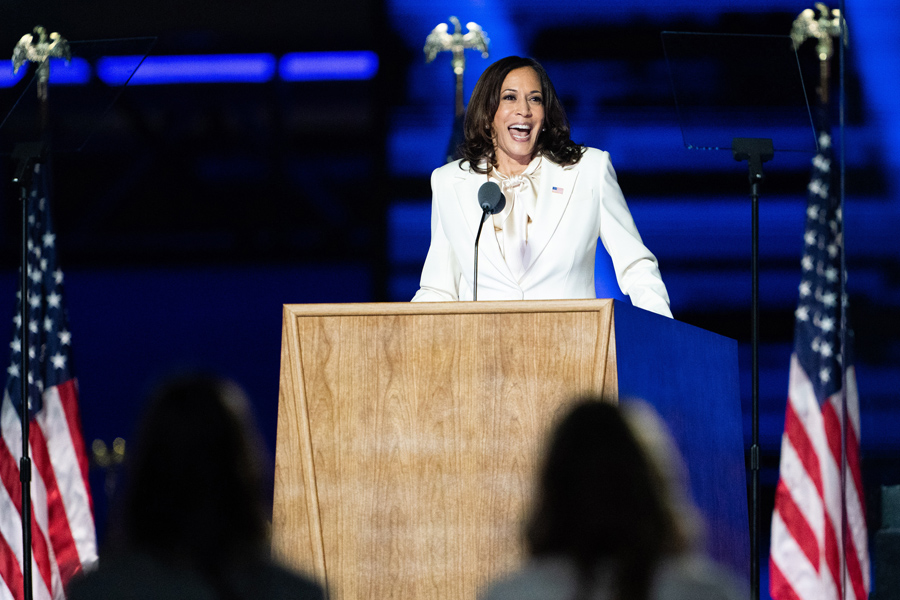 From the moment the sun came up in Thulasendrapuram, a little village in southern India, people started stringing firecrackers across the road. They poured into the temple. They took colored powder and wrote exuberant messages in big, happy letters in front of their homes, like this one: “Congratulations Kamala Harris, pride of our village.”

If there was one place in India that relished the triumph of Joe Biden and Harris, his running mate, in the U.S. presidential election, it was Thulasendrapuram, the hamlet where Harris’s Indian grandfather was born more than 100 years ago. Her name is scrawled on a board by the temple. People there love her and identify strongly with her.

For four days, Thulasendrapuram’s 500 or so residents had been waiting anxiously. They’d been praying at the temple, draping Hindu idols with rose petals and strings of sweet-smelling jasmine, and alternately searching for good omens and checking their cellphones for the latest updates.

On Sunday, a wave of joy burst.

“Kamala has made this village very proud,” said Renganathan, a farmer, who rushed to the village’s main temple. “She’s a great lady and an inspiration. She belongs to this soil.”

Although Harris has been more understated about her Indian heritage than about her experience as a Black woman, her path to the vice presidency has also been guided by the values of her Indian-born mother and her wider Indian family, who have stood by her all her life. In several major speeches, Harris has gushed about her Indian grandfather, P.V. Gopalan, who inspired her with his stories about the fight for India’s independence.

Her mother, Shyamala Gopalan, who came to America young and alone in the late 1950s and made a career as a breast cancer researcher before dying of cancer in 2009, remains one of the people Harris talks about most.

In her victory speech in Delaware on Saturday, Harris said her mother was “the woman most responsible for my presence here today.”

“When she came here from India at the age of 19, she maybe didn’t quite imagine this moment,” Harris said. “But she believed so deeply in an America where a moment like this is possible.”

Indians have been watching this election extremely closely, less because of Harris’ heritage than for what it might portend for India-U.S. relations. In the past few months, the two countries, the world’s largest democracies, have drawn closer.

Part of the reason is China. Since Chinese troops surged across the disputed India-China border in June, sparking clashes that killed more than 20 Indian soldiers, the United States and India have bolstered their military relationship, sharing more intelligence and planning more coordinated training exercises, both sides motivated by a desire to contain China.

How things will change under a Biden-Harris administration is the big question that Indians are now asking. The incoming administration is definitely much more familiar with India. Harris spent a lot of time in India as a young woman, visiting family and developing a fondness for Indian food and culture.

And Biden, even before he was President Barack Obama’s vice president, was a champion for India in the Senate, pushing hard for a nuclear deal between the two nations. Biden has also promised to allow more visas for skilled immigrant workers, which President Donald Trump drastically reduced, and Indian workers could benefit enormously from that.

But foreign policy experts expect that the Biden-Harris team will also be tougher on India. They say that the policies of the Indian prime minister, Narendra Modi, have made life more difficult for Muslims in the country, and while the Trump administration has kept quiet about changes in Kashmir and the passage of a new, blatantly anti-Muslim citizenship law, Harris and Biden are likely to be more critical.

Harris has already indicated that she is concerned about the way that India has tightened control over Kashmir, a Muslim-majority territory that is disputed between India and Pakistan. People who know her well expect her to speak up more.

“Kamala is a very strong personality who feels very strongly about certain issues, like human and civil rights,” her uncle G. Balachandran said by telephone from his house in New Delhi on Sunday morning. “She may say things if she feels India is going against humanitarian rights.”

Most analysts believe that human rights overall will probably get more attention under a Biden administration, which might make Modi nervous.

Shortly after midnight, Modi tweeted his congratulations to Biden and Harris.

“Your success is pathbreaking, and a matter of immense pride not just for your chittis, but also for all Indian-Americans,” he wrote in a separate message to Harris, using a Tamil term of endearment for aunts that she herself used in her speech accepting the vice presidential nomination in August.

A handful of Harris’ relatives still live in India, including an aunt who has been in her corner for years. She once lined up 108 coconuts to be smashed at a Hindu temple to bring Harris good luck in a race for California attorney general. (Harris won that election, by the slimmest of margins.)

But Harris’ grandfather left the ancestral village of Thulasendrapuram, which is a bumpy eight-hour drive from the city of Chennai, more than 80 years ago. She no longer has close relatives there. Still, that’s not stopping the village from hatching big plans.

Some people are hoping the government will now build a college there, a wish the village has been making for years. Others say that Harris’ ascension might bring a better road — or at least some more donations for the temple.

On Sunday, packs of women in bright saris thronged the temple, carrying buckets of freshly made sweets.

The smell of gunpowder hung in the air from all the firecrackers.

“From the moment she announced that she was a candidate, we have been praying,” said Arul Mozhi Sudhakar, a village councilor. “God has been listening to our prayers.”

Tweets by @forbes_india
News by Numbers: US Presidents by age
Trust & Work Without Doubt— Yik Chan on his journey as an entrepreneur