Juul's sleek high-tech-looking device, advertised in its 2015 launch with young, hip-looking people on billboards and in social media, quickly caught on with teenagers and young adults who had never smoked 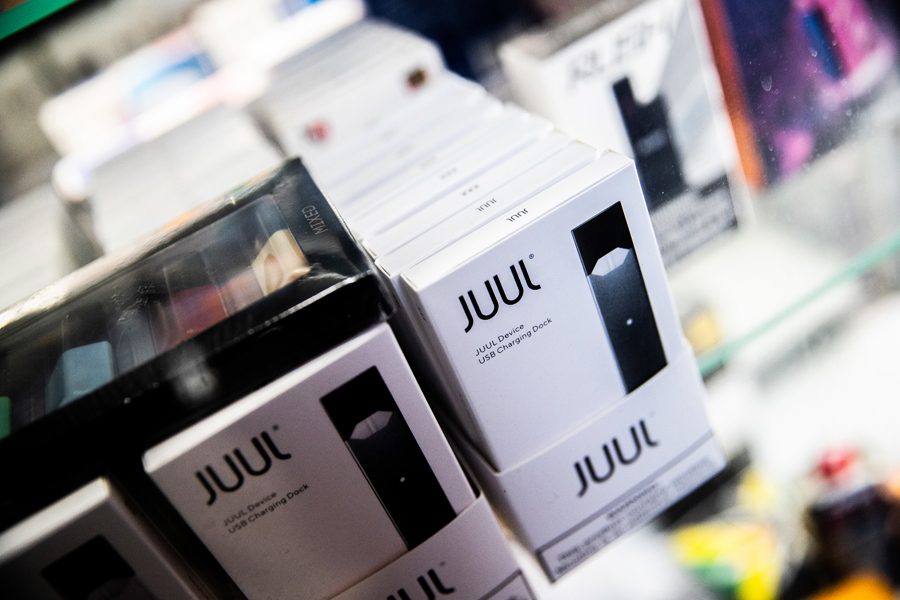 Juul vaping products at a smoking shop in New York on Nov. 10, 2019. In a settlement announced on Monday, June, 28, 2021, Juul has agreed to pay North Carolina $40 million to settle the first of a spate of lawsuits brought by states that claimed the company’s marketing practices fueled widespread addiction among young people to its high-nicotine e-cigarettes. (Jeenah Moon/The New York Times)

Juul Labs has agreed to pay North Carolina $40 million to settle the first of a spate of lawsuits brought by states and localities claiming the electronic-cigarette company’s marketing practices fueled widespread addiction to nicotine among young people and created a new public health problem.

The settlement, announced Monday morning, allows the company to avert a jury trial this summer as the Food and Drug Administration is deciding whether its vaping products can stay on the market.

The company had urgently sought the settlement, but the deal removes just one of numerous legal actions pending against it. Thirteen other states, including California, Massachusetts and New York, as well as the District of Columbia, have filed similar lawsuits. The central claim in each case is that Juul knew, or should have known, that it was hooking teenagers on pods that contained high levels of nicotine.

Nearly 2,000 other cases filed by cities, counties, school districts and other plaintiffs in federal courts have been combined into multidistrict litigation overseen by a single federal judge, similar to what has been done with cases against prescription opioid makers, distributors and retailers.

Beyond the litigation, a group of 39 attorneys general from both Republican- and Democratic-led states, led by Ken Paxton, Texas' attorney general, have been investigating Juul’s marketing and sales practices for over a year.

“For years, Juul targeted young people, including teens, with highly addictive e-cigarettes,” Josh Stein, North Carolina's attorney general, who sued the company in May 2019, said in a statement announcing the settlement. “It lit the spark and fanned the flames of a vaping epidemic among our children — one that you can see in any high school in North Carolina.”

But the company was able to reach the settlement deal without admitting to the allegations, one of its chief goals in the face of the other lawsuits and the FDA review.

In Juul’s statement, Joshua Raffel, a company spokesman, said: “This settlement is consistent with our ongoing effort to reset our company and its relationship with our stakeholders, as we continue to combat underage usage and advance the opportunity for harm reduction for adult smokers.”

E-cigarettes and other vaping products were initially conceived to be a less harmful alternative to combustible cigarettes, which are linked to the deaths of about 480,000 people in the United States each year. But Juul’s sleek high-tech-looking device, advertised in its 2015 launch with young, hip-looking people on billboards and in social media, quickly caught on with teenagers and young adults who had never smoked.

Over the next few years, e-cigarette use among high school students began to soar, and in 2018, the FDA commissioner declared an epidemic of teen vaping in the United States.

Although e-cigarettes do not contain the carcinogens that burning tobacco creates, scientists and public health officials worry about their potential health effects on young people. Some research shows nicotine could impair the developing brain, for example, and addiction to it could lead users to move to regular cigarettes, some people fear.

Juul had urgently sought a settlement in the North Carolina trial, which was set for July 12 and would have put Juul in court, dealing with testimony from parents and children, while the FDA was deciding its fate, which must be done by early September.

The money, which will be paid out over six years, will be used to fund programs that will help people quit e-cigarettes, prevent e-cigarette addiction and research e-cigarettes.

The settlement also requires Juul to sell its products from behind the counter in North Carolina stores, and to use third-party age-verification systems for online sales. The order commits Juul to sending young “mystery shoppers” to 1,000 stores each year to check whether they are selling to minors. It also bans the company from using models younger than 35 in advertisements and states that no advertisements should be posted near schools.

Carl Tobias, a law professor at the University of Richmond, who teaches product liability, said the settlement bodes well for the other states suing Juul.

“This opens a similar possibility to every state going forward,” he said. “North Carolina has been in the vanguard and deserves some credit. I think this has huge financial and other implications.”

Tobias said he was not surprised that Juul did not admit to wrongdoing.

“That almost always happens in these kinds of settlements — that’s a standard clause,” he said.

Juul has not begun other serious settlement talks, however, because none of the other 2,600 lawsuits against the company have been scheduled to begin during 2021. The company is waiting for the FDA ruling before deciding how to move forward, according to a person familiar with the thinking of its top executives. If the FDA will permit Juul’s products to stay on the market to help adult smokers quit, executives believe their negotiating stance will be strengthened.

But settling with numerous plaintiffs would be expensive. Juul has seen sales plummet during the past year, analysts say. The company is private so does not disclose its financial data.

Matthew Myers, president of the Campaign for Tobacco-Free Kids, called the North Carolina settlement a positive step that puts Juul under the same marketing restrictions that already apply to other tobacco companies, with some added sales restrictions and protection against the use of social influencers.

Tweets by @forbesindia
Jay-Z jumps on the NFT bandwagon to celebrate 25 years of 'Reasonable Doubt'
Photo of the day: What a save