Investor interest in fusion energy continues to slowly rise, and the number of startups in the field is multiplying, with an estimated 1,100 people in several countries making their living at these firms 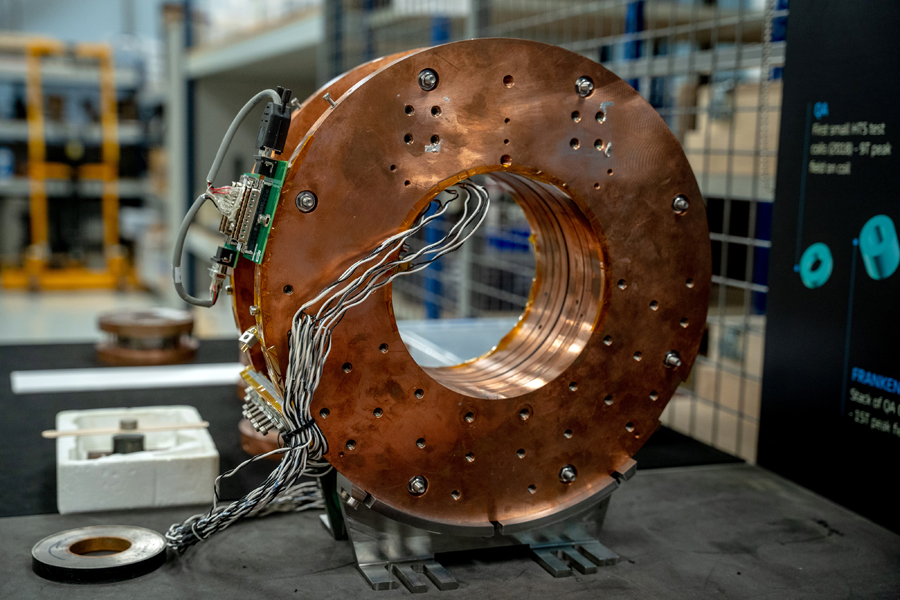 A powerful magnet of the type used in fusion devices in a lab at Tokamak Energy in Abingdon, England, on Aug. 23, 2021. Tokamak is beginning to license the know-how behind its magnets, which it uses to contain and compress the superheated gas. (Andrew Testa for The New York Times)

Harnessing fusion energy into something commercially viable — and maybe, ultimately, a clean source of power that replaces fossil fuels for centuries to come — has long been considered by some as the ultimate moonshot.

But investor interest in fusion energy continues to slowly rise, and the number of startups in the field is multiplying, with an estimated 1,100 people in several countries making their living at these firms. An industry is taking shape, with a growing network of companies that supply highly specialized equipment, like the components of the powerful magnets that fusion devices require.

The British government even recently saw the need to issue regulations for fusion energy — a kind of milestone for a burgeoning industry.

No one knows when fusion energy will become commercially viable, but driving the private investments is a rising alarm about global warming.

“Nobody has a better plan to deal with the climate crisis,” said David Kingham, one of the three co-founders of a company called Tokamak Energy that has raised about $200 million, mostly from private sources.

At Tokamak Energy, a goal is to eventually heat isotopes of hydrogen hot enough so that their atoms combine in a reaction that releases enormous amounts of energy. This is the essence of fusion, often described as the energy behind the sun and stars.

At the company’s laboratory in a business park outside Oxford, there is a warning on the public address system every 15-20 minutes that a test is coming and everyone should stay out of the room with the fusion device, which is 14 feet high with thick steel walls. There is a whirring sound that lasts about 1 second. Then a monitor shows an eerie pulsing video of the inside of the device as a powerful beam blasts into superheated gas known as a plasma.

One of the scientists in the Tokamak control room, Otto Asunta, 40, a senior physicist, said that since he joined the company six years ago, the number of employees has grown 10-fold to 180, while the work has become increasingly sophisticated.

“It is world-class devices that we build,” he said.

The company’s name refers to a type of device first invented in the former Soviet Union and now the main focus in the field. Tokamaks attempt to achieve fusion by using powerful magnets to contain and compress superheated gas — creating a kind of lightning in a bottle.

The company was founded in 2009 by scientists who thought they could achieve more at a small, nimble company than by remaining at large institutional laboratories, like the British government’s fusion research center at Culham, or ITER in southern France, where a very large device — about 100 feet in diameter — is being built at a cost of $25 billion.

At the time, the decision was a lonely one; now they have a lot of company.

Since the early 1990s, the number of fusion startups has been growing quickly. Andrew Holland, CEO of the Fusion Industry Association, said that there are at least 35 companies in several countries, including the United States, Britain, France, Canada and China. They have raised a combined $1.9 billion, largely from private sources, according to a forthcoming study by the association and the British Atomic Energy Authority.

Why put money into a far-out quest that has never made a nickel? Investors say they are attracted to the prospect of an early entry into a potentially game-changing technology: a fusion reactor that produces far more energy than goes into it. Such an achievement could have enormous commercial promise.

David Harding, founder of two investment management firms who has holdings worth an estimated 27 million British pounds, is one of Tokamak Energy’s key backers. He said that he had long been attracted to the idea of “cheap unlimited energy through scientific wizardry” but that now the “whole impetus of global warming makes it seem even more of a no-brainer.”

Investors say they are already seeing gains. Mark White, investment director of the UK Science & Innovation Seed Fund, which gave the Tokamak founders their first 25,000 pounds, said that judging by prices paid during a capital-raising last year, his fund’s total investments of 400,000 pounds were now worth about 7.5 million pounds. By that yardstick, Tokamak Energy’s overall value is around 317 million pounds.

The coming years, though, will require big increases in spending, fusion executives say. Tokamak Energy wants to build a pilot fusion machine at a cost of $1 billion using the powerful magnets it has developed that provide many thousands of times the pull of Earth’s gravity. The device could be the basis for the core of electric power plants or for other commercial uses.

Persuading investors to make the leap from single-digit million-dollar commitments to the $50 million to $100 million chunks needed for another generation of prototypes is not easy.

“People are still measuring investment returns with the usual metrics,” like how much revenue a company is producing, said Michl Binderbauer, CEO of California-based TAE Technologies, which has raised about $900 million, the largest publicly identified amount of money raised by fusion startups.

These pressures have led Binderbauer to try to make a business of some of the technologies that TAE has developed on the road to fusion. A TAE subsidiary is developing treatments for cancer using particle beams. The ventures, he said, are an easier sell for investors.

Fusion’s backers, though, say a tipping point may come when big investors rush to participate. “Once the money starts getting behind things, the sky is the limit,” said Harding, the hedge fund founder. “There aren’t many fusion projects in the world, but there are many investors.”