Countries, including India, are pooling resources to build a plant that runs on cleaner technology and abundant resources 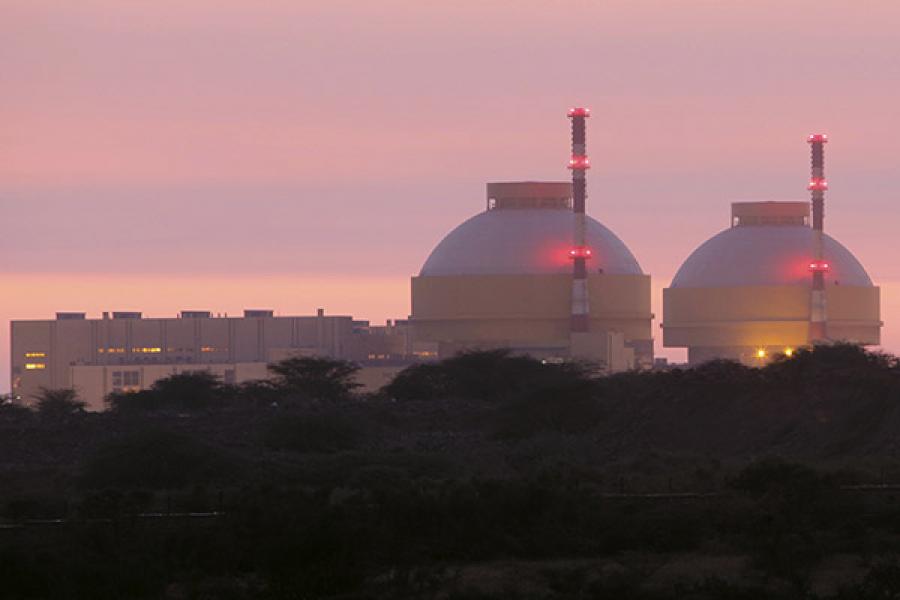 Image: Getty Images
TRACK CHANGE The Kudankulam nuclear plant in Tamil Nadu has a capacity of 1,000 MW. The Indian government is now looking to develop nuclear fusion as a source of energy

In the 1940s, attempts by the UK and the US to build the hydrogen bomb had a few useful byproducts, such as technologies that were able to use the power of the atom to generate electricity. The process of nuclear fission, which produces dangerous waste, was developed, and has been used since then to produce power the world over. Sadly, the other technological byproduct of the hydrogen bomb—nuclear fusion, which uses abundantly available fuel sources and emits no harmful radiation—never quite made the cut.

But this is fast changing. After the Fukushima disaster in March 2011, conventional nuclear plants that use fission technology are being shuttered in many parts of the world. The rush for the Holy Grail has begun. Activity to prove that fusion is feasible and economically viable has picked up, and new breakthroughs are speeding things up.

India, with its huge power deficit, is among the countries that have taken the lead in developing these technologies. The government has sealed its commitment through a sanction of Rs 2,500 crore to seed research of nuclear fusion. The funds are expected to be increased, as the work spearheaded by the Department of Atomic Energy (DAE), grows. At the focus of much of this activity is one reactor being built in the south of France.

The $20 billion project that aims to generate just 500 MW, which could indeed change the world, is called Iter (Latin for ‘the way’). It is being built by a consortium of seven partners—the European Union, the United States, Russia, China, Korea, Japan and India—to demonstrate the viability of harnessing energy from nuclear fusion on the scale of a power station.

Before this project, electricity from nuclear fusion has been produced only in laboratories. As the host-partner of the project, the EU is the largest contributor with a 34 percent stake. India has taken up 9 percent, which will be executed by the Gandhinagar-based Iter-India, a division of the Institute of Plasma Research. The seven partners will contribute in kind by bringing components to the project. In India, a lot of this work will be done by the private sector.

“Indian companies—both in the public and private sectors—with capabilities in nuclear and space industries are being awarded contracts,” says Shishir Deshpande, Iter-India project director. Nine large components, amounting to almost a tenth of the project, will be fabricated and sourced from India. The biggest of these, to build the cryostat—a 3,800 tonne pressure chamber the size of a 10-storey building—was awarded to Larsen & Toubro in August. The component, worth over Rs 1,000 crore, will be built in India and shipped to France in sections. 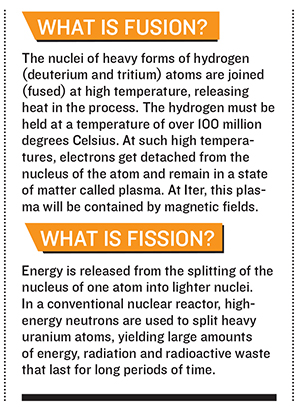 What it means for Indian firms
For L&T and MV Kotwal—board member and head of heavy engineering, who also spearheads the company’s ambitions in the nuclear industry—the Iter-India contract is a chance to establish the company’s reputation. L&T has sunk about Rs 1,800 crore in a forge shop at Hazira through a joint venture with Nuclear Power Corporation of India (NPCIL).

But nuclear projects are few and far between in the post-Fukushima era. Doubts have been raised about the viability of the shop that was set up for heavy forgings needed for nuclear and hydrocarbon reactors. The Iter cryostat will be fabricated at this facility. Kotwal says that with its current energy shortages, India simply cannot afford to stop working on nuclear energy.

Iter-India had awarded an earlier contract for the shielding vessel to Bangalore-based Avasarala Technologies. It is also working closely with TCS and Inox India for cryogenics, ECIL for power electronics, and several other vendors. Deshpande says their work will be subjected to international scrutiny and this will surely help the companies prove themselves and gain confidence. Most are looking for opportunities to step up their abilities to emerge as high-end, global suppliers in the nuclear business.

Over the next few years, more work will be contracted, including the work of building a lab in France for testing the systems.

India has had a nuclear fusion programme since 1986 and about 500 scientists have been working on various facets of it, Deshpande says.

Iter shares IP equally, so the partner countries can use the knowledge gained to set up their own demonstrator reactors at home. Deshpande and Iter-India hope that India can begin work on this as soon as gaps in its knowledge are bridged.

Deshpande says the fusion project could provide neutron sources for fission reactors. This could help fast-forward India’s thorium programme. India’s nuclear power was envisaged as a three-step programme; the final stage involved moving from uranium, of which we have limited reserves, to thorium, which is plentiful.

Fusion is something that was jokingly said to be ‘always the fuel of the future’. Lab experiments have now proved it is a viable concept. But practical problems of building and sustaining the process remain; materials that can withstand the heat and neutron damage need to be developed. But much of it is now in the realm of the possible. Energy-starved India would do well to push the process.