Across the city, parents and elected officials — including many who did not initially support the mayor's push to get children back into schools — registered their dismay and frustration over the closure of all the city's classrooms

By Eliza Shapiro and Juliana Kim 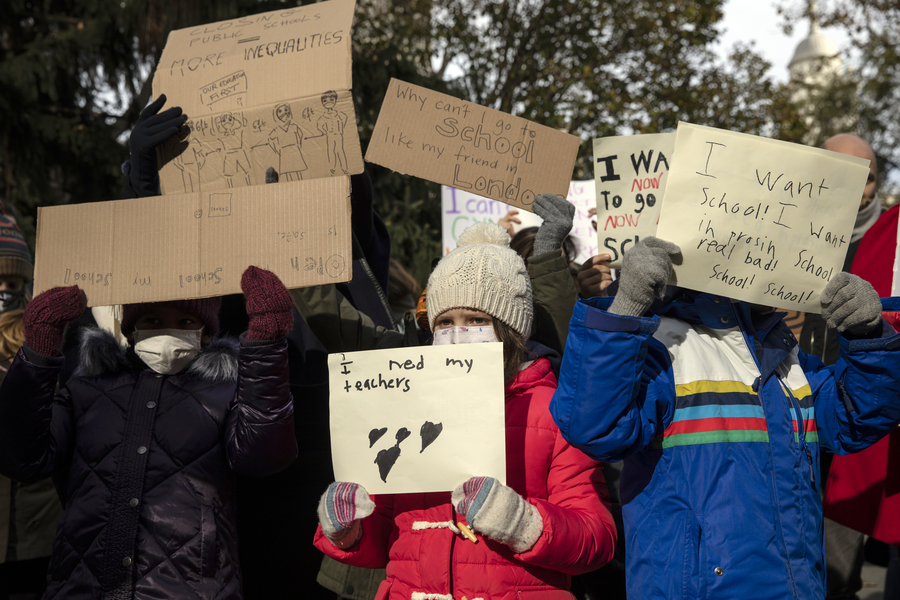 Image: Benjamin Norman/The New York Times Laura Espinoza took an hourlong subway ride Thursday morning from her Brooklyn neighborhood to City Hall, where she joined several dozen families gathered to protest Mayor Bill de Blasio’s decision to shut down the nation’s largest school system as virus cases have surged across the city. Espinoza has 6-year-old twins, both of whom have disabilities. They were attending school five days a week, a rarity for city students, but now they will have classes at home indefinitely. “They don’t adapt to change quickly, all this back and forth has not been good for them,” Espinoza said. She added that remote instruction is also taking a toll on her 15-year-old daughter. “My daughter can’t go to class because she’s helping me with the twins,” she said. “Remote learning is not working.” Across the city, parents and elected officials — including many who did not initially support the mayor’s push to get children back into schools — registered their dismay and frustration over the closure of all the city’s classrooms Thursday. De Blasio was the first big-city mayor in the country to reopen schools for all children who wanted to attend — but faced enormous headwinds and criticism from the teachers’ union, politicians and some parents who said they did not believe schools would be safe and that the city should have started the school year remote-only. At that time, when skepticism about school safety was omnipresent, the mayor set the extremely conservative threshold of a 3% average test positivity rate — among the toughest standards in the country — as a trigger to close the schools. But in more recent weeks, when so many of New York’s businesses and institutions remained dark or at least dimmed, the return of some children to school buildings offered a glimmer of hope that the city was slowly climbing its way back to normalcy. In some quarters at least, the hostility to reopening schools seemed to fade. So when de Blasio refused to revisit the 3% metric this week, it clearly angered parents of many of the 300,000 students who had been going into classrooms for at least part of the week. Some of those parents must now find child care until schools reopen, which could be weeks or even months away. And many worry deeply about the educational toll the chaos of this term is having on their children. “The city is not any more safe today than yesterday because schools are closed,” said Daniela Jampel, a mother of two who lives in Washington Heights and who attended the rally Thursday. “I am no longer content to let four men — Bill de Blasio, Michael Mulgrew, Richard Carranza and Andrew Cuomo — decide whether my children can go to school and whether I as a working mother can have a job and a career,” she added, referring to the president of the teachers’ union, the schools chancellor and the governor, along with the mayor.
Marilyn Martinez of Harlem said she and her wife, who both work full-time, were searching for a babysitter who could watch their 6-year-old daughter while she learned remotely. “Does the mayor think we’re all stay-at-home moms?” Martinez asked. “I ran out of family leave.”

At a news conference, de Blasio defended his decision, saying it was justified by the steady increase in test positivity, which again topped 3% Thursday. “We see a gathering storm, and we’re fighting back the second wave,” he said. “We are pausing. We are resetting the equation.” The mayor vowed to reopen the city’s schools, but warned that it would require “even more stringent rules.” Those would include expanding coronavirus testing in school buildings and possibly mandating that all students who want to take in-person classes provide written consent to receive a coronavirus test. The city has conducted random testing in school buildings once a month, but some educators have said that the testing is flawed because relatively few families have consented. About 117,000 of the roughly 300,000 children who have returned to classrooms have consented to testing. It is also possible that the closure could be lengthy if virus cases continue to surge. The mayor said that the city had not completed a plan for reopening its 1,800 schools, but he promised to release one soon. De Blasio has acknowledged that the 3% threshold is not a purely scientific metric. Instead, he has called the cutoff a “social contract” between the city and its educators and parents, evidence that City Hall was taking school safety seriously. On Thursday, the mayor said that he and his top aides came up with the number at a time when the city’s transmission rate was remarkably low. And most importantly, it was settled upon at a moment when the mayor appeared to have little political capital to actually reopen schools. The teachers’ union was openly threatening to strike, educators were discussing sickouts and other job actions and many parents said they did not feel comfortable sending their children back. “You remember, so many people said, ‘Don’t open schools, it’s too dangerous to open schools,’ ” de Blasio said. “We said, ‘We’ll put together a gold standard, the cleaning, the ventilation, the social distancing, the mask wearing, all these things, the testing, and we’ll prove to you that schools can be safe.’ And we did.”

Yet politicians and parents have pleaded with the mayor to reset the threshold because of how little transmission there has been in city schools since they opened in late September. Random testing in schools conducted over the past several weeks has produced a positivity rate of about .23%. That doesn’t mean there were no outbreaks: 89 school buildings temporarily closed in the weeks when schools were open because of two or more confirmed cases.

Now that the entire system of 1.1 million students is all-remote for an indefinite period of time, parents have raised urgent concerns about the quality of online instruction. Still, the vast majority of city students — about 700,000 — have been learning full-time from home anyway since schools opened, and almost all students spend at least part of their week learning online to allow for social distancing in schools.
But a number of politicians, almost all of whom criticized or opposed the mayor’s push to reopen over the summer, raised concerns about online learning this week. “The ones who will suffer most from a full transition to remote learning are Black and Latino and lower-income families, who have been left behind without needed access to technology and the internet,” said Eric Adams, the Brooklyn borough president and a Democratic candidate for mayor, in a statement. “The de Blasio administration also needs to present the public with a reopening plan,” said Corey Johnson, the City Council speaker. “This has been a disaster for parents and caregivers. The least the administration can do is to be honest about what to expect going forward.”
One group that did not express anger about the shutdown was the United Federation of Teachers. Mulgrew has said he was deeply frustrated that schools were closing so soon but did not encourage the city to change the threshold. “The city established the 3% infection rate threshold to make sure that schools did not become centers to spread the coronavirus,” Mulgrew said in a statement. “Now it’s the job of all New Yorkers to maintain social distance, wear masks and take all other steps to substantially lower the infection rate so school buildings can reopen for in-person instruction.”

The union has received criticism from some parents for supporting the 3% metric. But the mayor made clear Thursday that he and his top aides came up with the figure, not the union. That doesn’t mean the UFT didn’t play a role: The union accepted the number, and its concerns contributed to City Hall’s mad dash to create new safety measures over the summer. But the political back-and-forth means little to parents who said they are devastated about the closures. The shutdown “is a hardship, because now I have to take my kids with me everywhere I go,” said Nicole Subran as she walked to the hardware store where her husband works with her two children, ages 10 and 3, in the Bedford-Stuyvesant neighborhood of Brooklyn. “I consented to the testing, my kid wears a mask all day, I did everything my city asked me to do,” said Natalia Zatay, who lives in Forest Hills, Queens. “Blended learning was the only option given, and now we don’t even have that.”