The pandemic has made many seniors less active 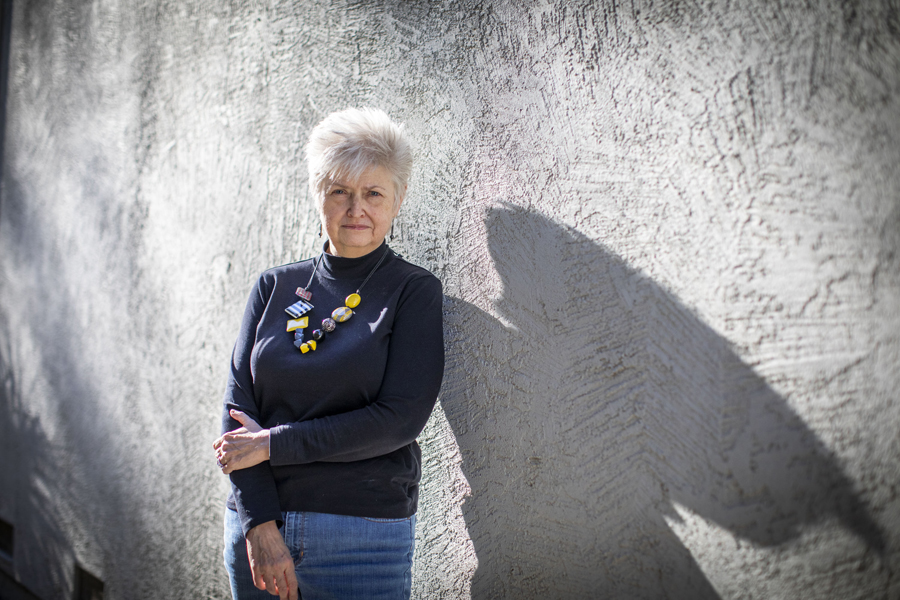 Cindy Myers of Petaluma, Calif., an executive in the Bay Area, stands for a portrait on Feb. 2, 2022. She has been working from home for two years, and the change has taken a physical and mental toll, she said. Health experts are concerned that the pandemic, in upending daily routines, has reduced mobility and physical conditioning in older adults. (Bryan Meltz/The New York Times)

In normal times, Cindy Myers, an executive at a nonprofit organization, is “not a real physical person,” she said. “I work at desk jobs. I’m not a big exerciser.”

Still, before the pandemic, Myers, who is 64 and has a doctorate in organization development, commuted from her home in Petaluma, California, to an office in San Francisco. She met friends for lunch or coffee, and she went to restaurants, theaters and lectures with her wife. “There was so much more variety in my life, more locations, more people,” she said. “You’re not cognizant of all the moves you’re making.”

Like many employees, Myers has now been working remotely for two years, curtailing social and cultural events and forgoing travel. That shift, perhaps exacerbated by a bout of depression in 2020, has taken a physical toll, she said. Her limbs feel weak, her balance rocky; she has fallen several times.

“Basic kinds of movement you take for granted, like walking from one end of the house to the other, are exhausting,” she said. “I’m worried about it.”

Many health experts are worried about worsening physical conditioning and mobility among older adults since COVID-19 upended the daily routine. Recent research indicates that many of those who had mild to moderate infections, even some who have managed to avoid the virus altogether, may be suffering functional declines.

To date, much of the attention paid to the pandemic’s effects on the older population has focused on its frightful mortality rate: Nearly three-quarters of Americans who have died have been 65 or older.

“When you’re hospitalized and you’re older, it takes a long time to get back on your feet,” said Marla Beauchamp, who researches mobility, aging and chronic disease at McMaster University in Hamilton, Ontario. “COVID is still impacting them in a significant way months and months later.”

But less severe disease can also affect their physical ability. Beauchamp led a recent study of Canadians over age 50 who had confirmed, probable or suspected COVID in 2020, when testing was not widely available. The study revealed worsened mobility among those with mild to moderate illness — 93% of whom were never hospitalized — compared with those without COVID.

Nearly half of those 65 and older who had contracted COVID reported less ability to engage in physical activity like walking and exercising than before the pandemic — but so did about one-quarter of those who did not become infected. Smaller proportions of those uninfected said their ability to move around the house, and to do housework like dishwashing and dusting, had also declined.

Although some of that decline might reflect normal aging, the study measured changes over only a nine-month period. In people who did not develop COVID, “the most plausible reason for the decline is public health restrictions during the pandemic,” Beauchamp said.

Declines in physical function are showing up in older Americans, too. A University of Michigan team surveyed about 2,000 American adults ages 50 to 80 in early 2021, asking about their activity levels (but not about their COVID status).

It found that almost 40% of those over 65 reported both reduced physical activity and less daily time spent on their feet since the start of the pandemic in March 2020. In this representative national sample, those factors were associated with worsened physical conditioning and mobility.

“It’s a cascade of effects,” said Geoffrey Hoffman, a health-services researcher at the university’s School of Nursing and the lead author of the study. “You start with changes in activity levels. That results in worsened function. That in turn is associated with both falls and fear of falling.”

Beauchamp added: “It’s really concerning to see this decrease in mobility. This is telling us that the pandemic alone has had a significant impact on older adults.”

Neither of these observational studies, in Canada or in the United States, explored reasons for the self-reported increase in physical decline. But their authors suggested that pandemic-related restrictions could have caused deconditioning, even in people who were not ill.

Not only did gyms, yoga studios, pools, adult day programs, community and senior centers all close for extended periods; many older people also undertook fewer ordinary chores and errands and may have skipped recreational pastimes.

“If you’re limiting visits to the grocery store or having groceries delivered, or not going to visit or help with your grandchildren, if you’re not meeting friends at a coffee shop — those all take a certain level of physical activity,” Beauchamp said.

Physical function is key to living independently — the future that a great majority of older people envision for themselves. A loss of mobility and function across a considerable proportion of the senior population could mean increasing disability, a greater need for eventual long-term care, and higher Medicare and Medicaid costs.

But that is not inevitable, Hoffman said: “You can reverse deconditioning. You can recover mobility.”