Series F round sees $180 million from KKR, but comes as the company struggles with execution issues 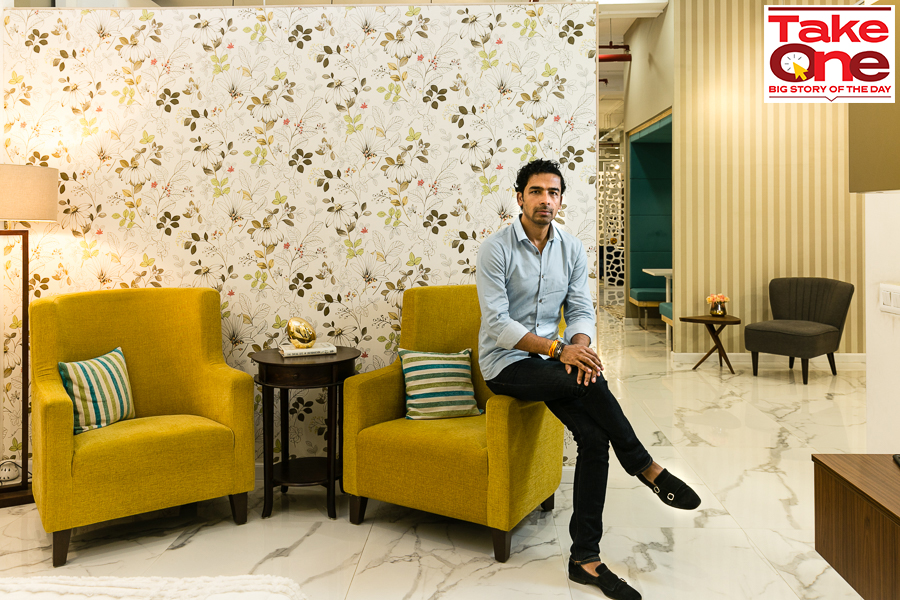 The company plans to use the funds to expand into international markets; Livspace currently operates in Singapore, besides its core market in India. It’s now looking to replicate its playbook across the APAC, MENA and Australia regions. In Saudi Arabia, for example, Livspace formed a joint venture with the Alsulaiman Group, Ikea’s operating partner in the region. Both parties invested $50 million last year to take advantage of the market opportunity presented by Saudi’s booming real estate market, especially the residential segment, says Anuj Srivastava, co-founder and CEO, Livspace. In Singapore, on the other hand, Livspace bought a controlling stake in Qanvast, a home remodelling and design platform.

That potential stems from the massive size of the market: According to industry estimates, the home improvement market in India is worth $30 billion. More than 95 percent of it is unorganised, serviced by independent interior designers, contractors and labourers.

To do away with the ordeal of dealing with multiple vendors, from carpenters to plumbers, opaque prices and erratic timelines, Srivastava, a Google veteran, and his IIT-Kanpur mate Ramakant Sharma launched Livspace in 2015. The idea was to enable an “ecommerce-like, trusted and predictable experience,” says Srivastava. His sister-in-law Shagufta Anurag, founder of Space Matrix, a leading architecture and design firm, also helped co-found the startup. Jungle Ventures, a Singapore-based fund founded by Srivastava’s brother Anurag, was among the early investors.

Livspace’s tech-enabled playbook works as follows: At the outset, an online survey captures the customer’s scope of work, preferences and budget. They are then matched with one of Livspace’s 3,000 interior designers. After online and physical consultations, the designer renders a mock-up for the customer using Livspace’s proprietary software. Once approved by the customer, Livspace brings on board third-party contractors to carry out the job.

Average customer spends are Rs8-10 lakh, 10 percent of which is paid upfront and the balance in two tranches, as and when portions of the job are completed. The company says it has delivered more than 100,000 rooms across India, Singapore and Malaysia, thus far.

Livspace’s gross merchandise value (GMV) is calculated basis the booking amount, not the completed jobs, says Srivastava. In FY21, Livspace’s GMV stood at $140 million. Doubling every year, FY22 will close at a GMV of $350 million, and the projection for FY23 is $700 million. The GMV translates into actual revenue in 4 to 5 months after being booked, says Srivastava. While actual revenue figures for FY21 are unavailable, FY20 revenue stood at Rs 398 crore, according to data provider Venture Intelligence. Livspace chose not share the GMV for FY20, but using the actual revenue figure of Rs 398 crore (around $53 million) as a proxy, it roughly corroborates Srivastava’s claim of GMV doubling every year. 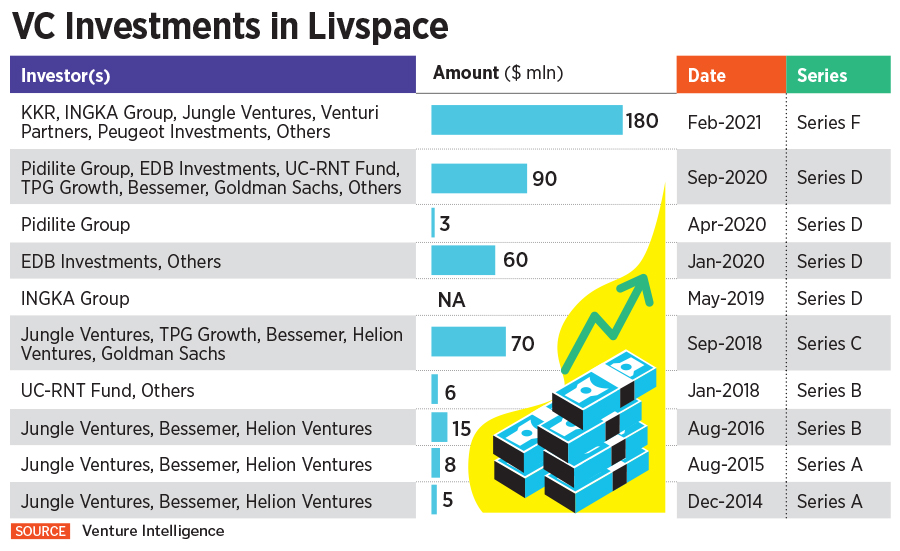 The numbers are impressive, but they belie deeper concerns. Social media is dotted with customer complaints about delayed timelines, shoddy work, increased costs, and a lack of communication. One unhappy customer even set up a website called Livspace-reviews.com, spotlighting his unhappy experience with the company. Interior designers who formerly worked at Livspace told Forbes India, on condition of anonymity, that two out of three projects they worked on every month would result in customer complaints. “Our job was to design the room. The ops team would then hire contractors to get the work done. But these were third-party vendors, so quality was often an issue. I would repeatedly get calls from customers, but I had no authority to help them. The ops team was responsible for that. There was a huge communication gap,” says one designer.

Srivastava, for his part, claims that Livspace has a net promoter score (NPS) of 90, up from 64 when Forbes India spoke with him more than three years ago. Used to ascertain customer satisfaction, an NPS of 50 is deemed excellent. HomeLane, for the sake of perspective, has an NPS of 68. He says, “One needs to appreciate the sector in which we are operating. The contractors who are working in this sector are part of a large unorganised market and the delivery timelines from such contractors would generally vary on account of various factors, including the availability of material and labour.”

“Besides”, he adds, “our investors wouldn’t back us if we had operational issues. Look at our cap table.” The roster is impressive, with big-ticket investors like Goldman Sachs, Ingka Group, Singapore’s EDB Investments, TPG Growth, Helion Ventures, Bessemer Venture Partners and now KKR. The company has raised close to $450 million so far. By comparison, rival Homelane, funded by Sequoia and Accel Partners, has raised roughly $108 million, according to Venture Intelligence.

So what explains the investor love despite the customer feedback?

First, this is not an easy execution category. While customers order products such as kitchen cabinets or wardrobes looking at fancy catalogues, there is a host of allied services and customisation that comes with it. Kitchen fittings, for example, will need carpenters, plumbers, electricians, etc. “Broadly, the number of escalations you get is directly related to your ticket size. More the ticket size, more the customisation. More the customisation, more the chances of failure. More the failure rate, more the chances of escalation,” says one person familiar with the workings of the industry, on condition of anonymity. “So one has to look at it in the overall context of things.” 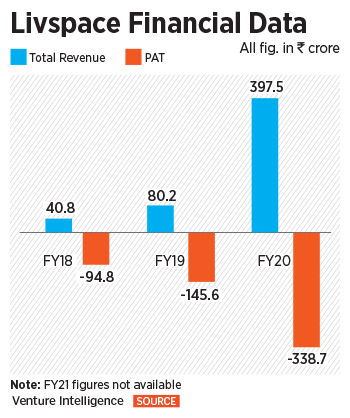 Second, this is a “highly emotional category”, as Nicholas Cator, managing partner at Venturi Partners, puts it. Since this is not an “easy” industry, there will always be people who are unhappy and they will voice their dissatisfaction because emotions run high when it comes to one’s home.

Third, given Livspace’s scale of operations—it completes 1,700 to 2,000 projects a month—says Srivastava, “It is inevitable that about 1 percent of the thousands of concurrent projects may experience delays for reasons beyond our control.” The team hopes to bring this down to 0.5 percent in the next 6 to 12 months, he says.

Yet industry insiders Forbes India spoke with on the condition of anonymity are confounded. “I don’t know how the company is raising such funds, given its execution issues. It really baffles me,” says one such person. “NPS of 90 is virtually impossible in this industry,” says another.

So can the metric be manipulated?

Srivastava claims that Livspace’s NPS is basis “feedback from each of our thousands of customers at booking, order confirmation and handover stage.” And that the response rate is “upwards of 75 percent”.

“If I was an investor, I would dig deeper,” says the industry insider first quoted referring to the 90 NPS claim.

One explanation he offers for the investor love over customer negativity is the fact that interior designing and renovating is a not a high frequency business. “Investors are more bothered about financial performance rather than customer experience because there are hardly any repeat customers in this business,” he says. “So they’re piling in money because the fact remains that it is a good business to be in because margins are high and customer pain points are real.”

Finally, there's the perception in the market that Srivastava, based in Singapore, is focussed on fund raising, while Bengaluru-based Sharma (RK), co-founder and chief operating officer, is distracted by his angel investments. With 10 to 15 startups in his portfolio, in which he plays an advisory role, three people familiar with the workings of the company told Forbes India that it posed a problem. Says one, “If RK refocuses, they would have fewer execution issues.”

In the end, in an execution-oriented business, how customers perceive the solution is what finally matters.

Tweets by @forbesindia
Enjoy Life: Stay Active and Eat Healthy
The pandemic has made many seniors less active