iPhones in India: From outstanding to an outlier

Apple has had lower than its average market share between Dec-2017 and Dec-2018; rather people have increasingly preferred to buy One plus, Huawei and Oppo 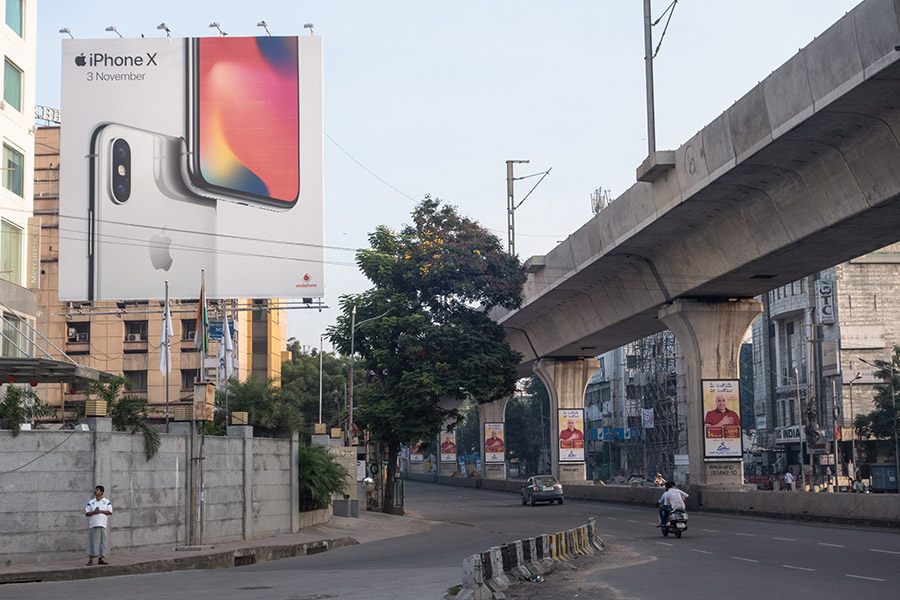 Image: Shutterstock
Much is being talked about Apple’s position in Mobile device market in Asia and India is a crucial market for iPhones in during such time. Tim Cook has himself talked about India being one of the most important drivers of future-demand the way once China used to be. However, iPhone has been losing Chinese market; for one the onslaught of domestic brands in China and the other is the ongoing trade war between China and US. Indian mobile-device market can be a silver lining for iPhones in Asia, however losing this market can also be a disaster for Apple. Sale of new iPhones in India was 20% less YoY in November 2018.

Before we dig deep into the details of Premium Indian mobile handset market let’s understand how iPhone is positioned in India and how it has different dynamics in India when compared with other markets:
1)    Indian customers pay a huge amount in import duty to own an iPhone, had there been a domestic manufacturing/assembling unit in India this would cost them 30%-40% less than the current price.
2)    Indian customers are not offered any buyback facility for the older models

This means every time an Indian customer buys a brand new iPhone she is willing to spend a good sum on an outstanding, high-involvement product. As Apple has consistently increased iPhone’s price with every new upgraded-edition, it has been making good revenues and profits. However, last one year data for volumes sold in India shows that iPhone has been losing market-share to its Chinese counter-parts in terms of volumes sold. As the ticket price breached the psychological barrier of ₹1 Lakh, the value perceived might not have risen commensurately. 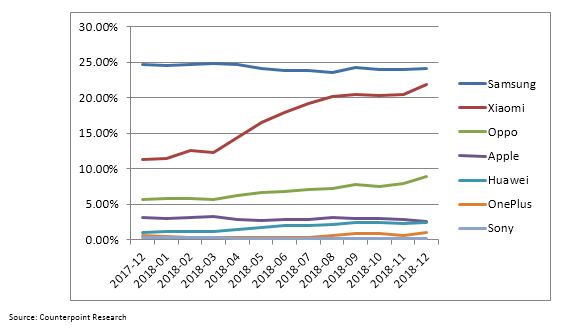 While the percentage numbers of market share, in last one year, may seem high for Samsung and decent for Apple (given it sells iPhones at a large token), what is clearly evident in figure 2 is the rate at which the market share has been eaten up by Chinese manufacturers at an unprecedented rate. What can be seen, very clearly, is that One plus and Huawei seem to have gained larger market share (in volumes) at an increasing pace, around the time of launch of iPhones; apart from Xiaomi, and larger part of Oppo that compete in different (budget) segment, and are the leader there. Oppos and Vivos have done damage to iPhones in China already.

Fig 02: Deviation of market share from their average for respective mobile brands in India (in 13 months) 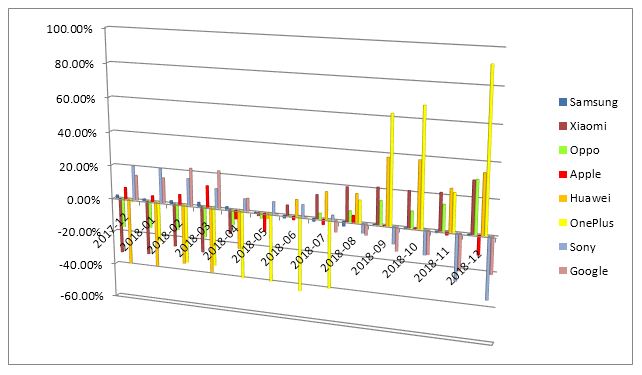 We can clearly see that since the launch of new iPhones (Xs, Xs Max and XR) Apple has had lower than its average market share between Dec-2017 and Dec-2018; rather people have increasingly preferred to buy One plus, Huawei and Oppo. Have these brands really cracked the code?

In 2014, Apple had reportedly doubled its R&D budget to introduce cutting edge tech to their iPhones, the outcome of which doesn’t seem to impress the Indian customers as much. While Value vs Price factor used to be iPhones’ strength earlier, it seems to be taking a hit from other new players. Lesser people perceive a proportionate value in the price they are paying for new iPhones or even Samsung for that matter. People are also tending to hold on to previous iPhone models rather than buying new models. One plus, Huawei and Oppo have made their way in the premium segment when it comes to purchase of a new handset. We can see that One Plus has clearly been able to woo the Indian customers with its high-end specifications, performance, built-quality, Showroom experience similar to that of Apple etc. The iPhones over the years are becoming more expensive than before at a rate of 17%-19% on CAGR basis. 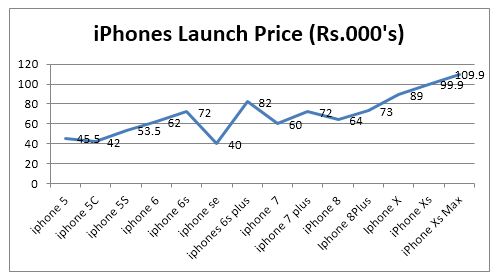 At a starting Price token of nearly ₹1 Lakh, new iPhone models seem to have hit a limit where lesser consumers find the deal worth it. Sale of new iPhones was 20% less YoY in November 2018. Even if Apple is able to setup it’s assembling unit in India for it’s iPhones line-up, the price tag might come to about 65K to 70K (starting range), which is still going to be 25K to 40K pricier than the likes of One-plus models.

It might be the time when Apple repositions iPhones or launches a workable price segment for the Asian markets as a strategic move. The sales figures of iPhones show that iPhone XR outsold the pricier XS and XS Max models. There will always be a segment of customers that is affluent and for it iPhone will always fulfill subtle functional and social needs due to its tactile superiority and novelty.  However, One-plus has come a long way to touch that realm as well, very evident in its new showroom-experience and the success of One plus 5T, One-plus 6 models also. This indicates that more people want a premium phone but at a more approachable price range. Anything beyond Rs 50K-70K might be more of an outlier than outstanding. What could be another strategy, a potential acquisition of One-Plus?