With less than a week to go for the News18 Rising India Summit 2019, a look back at what made news at last year's marquee leadership event, where policymakers and celebrities congregate to define a new India 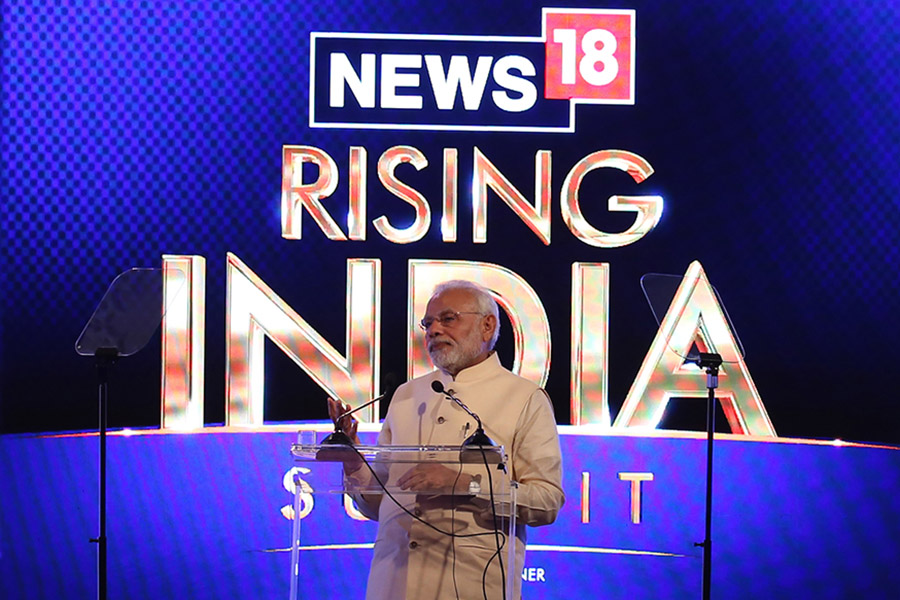 As we gear up for the 2019 edition of the News18 Rising India Summit—to be held on February 25 and 26 in New Delhi, bringing together political and sectoral leaders—here’s a refresher on all that made news in the 2018 session of the mega-event. Held in March 2018, the Rising India Summit last year witnessed key agenda points from Prime Minister Narendra Modi, Minister Rajnath Singh, UP CM Yogi Adityanath and actors Ranveer Singh and Kangana Ranaut among others.

Here are the top 10 moments from the 2018 Summit:
PM Narendra Modi looked East
The Prime Minister talked about how, for him, Rising India means the rise of every citizen's self-respect. He further talked about how the eastern part of the country had for long been left behind in the race for development and needed the region to go from "isolation to integration". PM Modi laid down his government’s plans for various sectors, saying that his basic mantra was to break silos to derive solutions for growth.

Ranveer Singh spoke about his struggle with Padmaavat protests
The infectious energy that the actor brings was on full display at the Summit as he made his entry on the song 'Khalibali' from his film Padmaavat. He spoke candidly about how the fringe groups had desecrated the film set. “It was a very frustrating process because none of this was in my control. I was furious, livid. It was absolutely wrong. I couldn’t do anything and was asked not to do anything. So, I decided to just stay away from it," he said. “But when Padmaavat sets were vandalised, my shock turned into rage. I couldn’t believe that we were living in 2017. I had to be physically restrained. The equipment they broke provides livelihood to thousands. I value the sanctity of the set. It's my place of worship. You don't go to my place of worship and do this."

Yogi Adityanath's definition of secularism
The Uttar Pradesh chief minister said that if secularism meant not taking sides, then there was “nobody more secular” than the nation's Hindu majority. “There is a difference between secular and irreligious. We should make that distinction. A government must be secular, not irreligious. Today's secularists have turned secularism to mean abusing India's traditions," said Yogi. When questioned on how he would explain the Kasganj riots, the CM said, "Kasganj was not a riot, it was an incident. There was no curfew. Holi fell on a Friday and on my appeal, Muslim clerics extended the time for Friday prayers."

Smriti Irani revealed Govt’s plan to counter trolls
The former Information and Broadcasting minister said she has been a victim of Twitter trolls too. “The government is working to become a troll monitor. The news is now filled with views,” Irani said. “We cannot ignore the capacity of fake news to demean. We cannot ignore the technology engineered to deteriorate,” she added.

Amarinder Singh’s lament of the army’s obsolete weapons
The Punjab chief minister lamented the sorry state of weapons with the defence forces and claimed that the soldiers in Kashmir were swapping weapons with the ones they seize from terrorists. “The soldiers of the regiment I served with are now posted in Kashmir and they are swapping their weapons with the ones they seize from terrorists because they like them better. If a soldier doesn't have confidence in his weapon, how can he fight?" said Singh. He also took a jibe at Delhi CM Arvind Kejriwal for apologising to former Akali Minister Bikram Singh Majithia and said that maybe the Delhi CM was trying to "reduce his load". Singh further added that AAP MLAs are not happy and were now looking for an alternative.

Nirmala Sitharaman’s concerns for armed forces
India's first full-time woman defence minister called war preparedness and lack of modern equipment with the armed forces, a cause of concern. The minister responded to Amarinder Singh’s allegations saying there was no doubt that modernisation was a challenge. She also quashed the Opposition’s allegations of a scam in the Rafale fighter jet deal and asserted that there was no need for a probe. When quizzed if the ministry would be open to probe in the wake of the allegations, Sitharaman said, “Probe? What probe? You can look into the deal as much as you want, you will not find anything. There is no scam,” she said.

Rajnath Singh's warning to Pakistan
The Home Minister fired a warning shot to Pakistan saying that the Indian Army was ready to not only protect the country from within but can also "cross the border if needed". He further went on to say that India's growth was not just because of the BJP but the current government did accelerate the process. Not daunted by the UP bypoll-loss, Singh said the BJP realises that loss is also a possibility in the election. "Ho gaya, aage nahin hoga. Humein pata chala ki aisa bhi ho sakta hain (What happened in Gorakhpur will not happen again because we know that this result is also a possibility)," the minister said.

Kangana Ranaut, open to the idea of joining politics
Apart from being a cinematic tour de force, Kangana Ranaut has the spotlight trained on her off-screen presence as well, for her candidness and outspokenness over a variety of issues. "Personally, I feel politics is a wonderful field, though it is often misunderstood. But what I don’t like is the fashion sense of politicians. Because of the way I dress and speak, I don't think any party will take me. But personally, I don't mind entering politics if they don't change my fashion sense, and let me say what I want to," said Ranaut, smiling.

When Farooq Abdullah complained to Piyush Goyal about train pillows
The Railways minister took a dig at Andhra Pradesh CM Chandrababu Naidu quitting the NDA and moving a no-confidence motion against the Centre by saying, "Naidu has failed to do anything. We gave them funds but if you go to Amravati nothing has happened on the ground. Now suddenly Naidu is blaming us. They have failed to implement anything."

There was a light moment in the session as National Conference chief Farooq Abdullah complained to the minister about pillows in trains. “The condition of the pillows are so bad that if you were not sick before boarding the train, you end up falling sick by the time you reach your destination,” said Abdullah. To this, Goyal told Abdullah that he must not have travelled on a train recently and his experience must be old. Saying that he values customer feedback, Goyal acknowledged that people in past had faced this problem which had been noted and rectified.

Why Ruchir Sharma won’t dispense economic advice to PM Modi
Morgan Stanley’s chief global strategist spoke about his time in Russia when he faced Vladimir Putin. In Putin’s presence, Sharma took to the stage to make his own presentation about the Russian economy. He first pointed out that Putin has been a 'reformer' when he first came to power, but things changed for the worse after that. “It was in stark contrast to who Putin was initially,” Sharma said. While Sharma continued his criticism, the Russian President didn’t bat an eyelid. "He, in fact, took notes,” said Sharma. When it was Putin’s turn to speak, he spoke about the issues raised by Sharma.

The next morning, Sharma was woken up by a number of phone calls. He was asked to check the newspapers. All the Russian newspapers had the same headline: ‘Who is this man advising Putin?’ The newspapers were quite disappointed with Sharma’s guts and advised him to leave the country. "I left Russia and never returned," said Sharma. In a classic case of once bitten, twice shy Sharma said he may have a lot of ideas for the growth of the Indian economy, but he’s not willing to advise Prime Minister Narendra Modi on it. “I would rather observe than advise,” he said, adding that no one quite listens to his suggestions.

For speaker details of the Rising India Summit 2019, on February 25 and 26, visit www.news18.com/rising-india-summit/

Tweets by @forbes_india
Borosil: Toughened glass
iPhones in India: From outstanding to an outlier