Letting independent workers choose their locations can boost companies, employees, and even the economy, according to research by Prithwiraj Choudhury and colleagues. 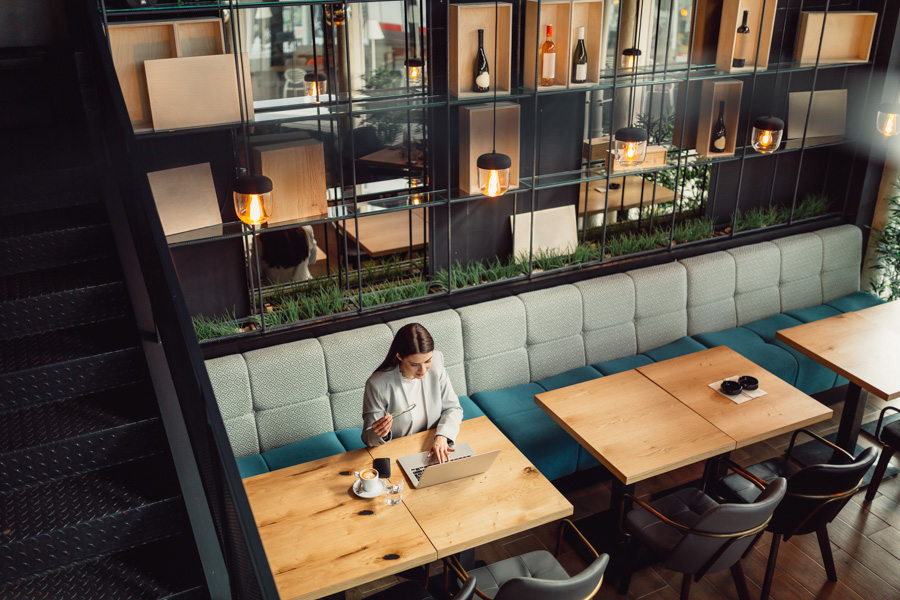 
Companies that let their workers decide where and when to do their jobs—whether in another city or in the middle of the night—increase employee productivity, reduce turnover, and lower organizational costs, new research suggests.

Prithwiraj Choudhury, an associate professor in the Technology and Operations Management Unit at Harvard Business School, and fellow researchers compared the outcomes of flexible work arrangements at the US Patent and Trademark Office (USPTO). The team found that employees with liberal “work from anywhere” arrangements, similar to those offered at Akamai, NASA, and Github, among others, were 4.4 percent more productive than those following a more traditional “work-from-home” policy that gives schedule flexibility but requires workers to live near the office.

“While prior academic research has studied productivity effects of ‘working from home’ that gives workers temporal flexibility, ‘work from anywhere’ goes a step further and provides both temporal and geographic flexibility,” says Choudhury, who co-authored the paper, (Live and) Work from Anywhere: Geographic Flexibility and Productivity Effects at the United States Patent Office (pdf), with HBS doctoral student Cirrus Foroughi and Barbara Larson, executive professor of management at Northeastern University.

While digital technology has made workers more efficient and accessible than ever before, many companies have been slow to let employees work from home regularly, let alone from anywhere at any time. The study’s findings can help firms understand the effects of various flex-work options, and support certain types of employees as they negotiate with employers. Choudhury says the results have important implications for workers, who could potentially move to lower-cost areas, reduce commuting costs, and live closer to family and friends.

Isolating the benefits of remote work
To study the productivity effects of work-from-anywhere policies, Choudhury looked for a setting that would allow the researchers to isolate productivity changes among workers with similar job functions under different remote-work conditions. The USPTO provided the perfect opportunity.

Seeking to increase efficiency, the agency implemented the Telework Enhancement Act Pilot Program (TEAPP) in 2012. The program transitioned patent examiners to a work-from-anywhere policy over 24 months, shifting new examiners each month based on union-negotiated quotas. This implementation process enabled Choudhury and his co-authors to avoid what is known as the selection problem in social science research.

“The concern is that there is some underlying characteristic of people that is driving whether one wants to become a remote worker, and that characteristic is also correlated to productivity,” explains Choudhury.

Prior to TEAPP, examiners could work from home as long as they were within 50 miles of the USPTO headquarters in Alexandria, Virginia, but they had to report to the office once a week. The agency eventually allowed them to work beyond 50 miles away, but still required weekly trips to the office. TEAPP provided full autonomy.

Choudhury and his coauthors compared 600 examiners’ productivity under these various conditions. While working remotely, productivity increased among all examiners and continued to rise with each step toward the full work-from-anywhere policy, the researchers found. Productivity increased 4.4 percent when employees moved from working at home on a limited basis to the location of their choice. Based on a patent's average value, this productivity gain could add $1.3 billion of value to the US economy each year, the researchers estimate. 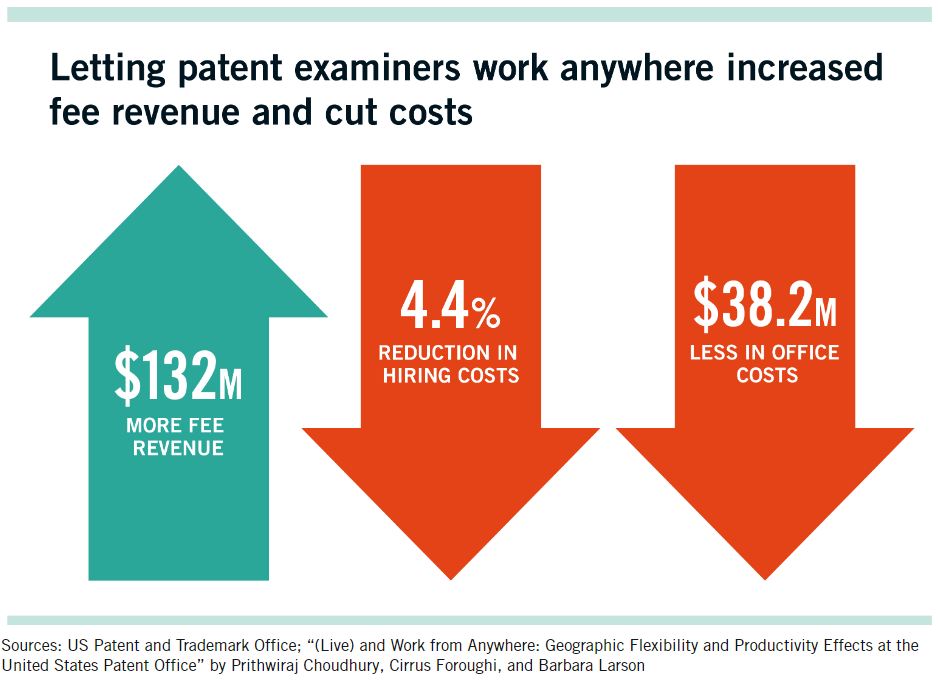 Many of the examiners also benefited financially by bringing their Greater Washington, DC, salaries to less costly regions, effectively increasing their real incomes. Early- and mid-career workers tended to choose locations based on future career considerations, while workers with longer tenures flocked to “retirement-friendly” destinations, such as Florida. 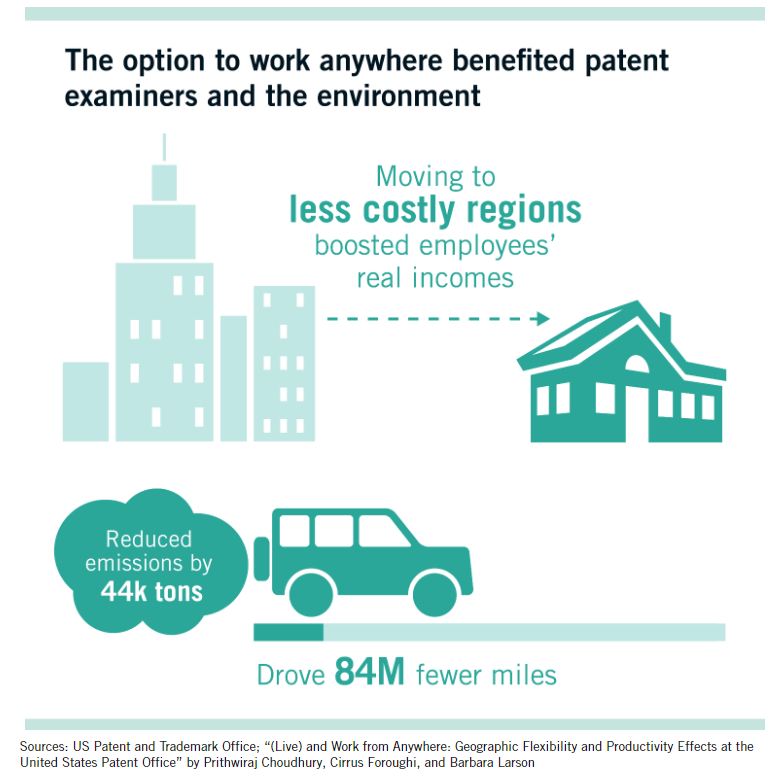 Work from anywhere isn’t for everyone
To put their findings in perspective and offer a framework for future research, the researchers emphasized the nature of a patent examiner’s work, which requires little coordination with co-workers on a daily basis. Examiners perform their work independently, adhering to the same best practices of patent searches—a style of work that prior research has termed “pooled interdependence.” Choudhury stresses that the research results apply only to companies or units that employ this type of worker.

“For the vast majority of such employers, remote work is a win-win, because the employee can move to a location of choice and save money in cost of living, and the employer will see higher productivity and lower attrition, and save on real estate costs,” says Choudhury.

Employees with jobs that require minimal coordination could potentially use these findings in negotiations with a prospective employer, says Choudhury. However, work-from-anywhere policies could increase costs in work environments that require brainstorming and project-based interaction, says Choudhury, adding that more research is needed to fully understand the implications of remote work in more collaborative settings.

Looking ahead
As some companies move to adopt broader telecommute policies, others such as Yahoo! have publicly retreated from allowing workers to perform their jobs away from headquarters. Companies have cited the need for office “face time” and the benefits of spontaneous interaction among reasons to avoid remote work, even for highly skilled, autonomous employees. To Choudhury, a deeper factor might underlie their reluctance.

“It’s trust—it’s the fear that people will shirk, and I think it’s the lack of clarity from the academic research as well,” Choudhury says.

The potential for this new research to help inform discussions about remote work policies excites Choudhury. Giving knowledge workers, particularly those who work solitarily, the freedom to choose their location could benefit not only employees, but companies and the environment, too.

“People will gravitate to a location where they want to live, rather than where they have to live,” predicts Choudhury. “This was the big promise of digital technology, that it would allow people to move away from the urban clusters.” 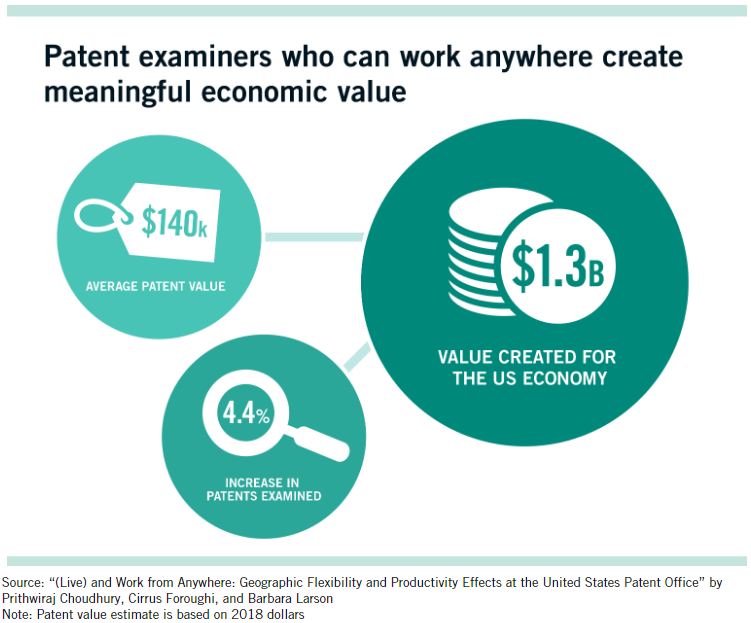 For companies seeking to expand their remote work policies, the USPTO program offers several other considerations for executives: